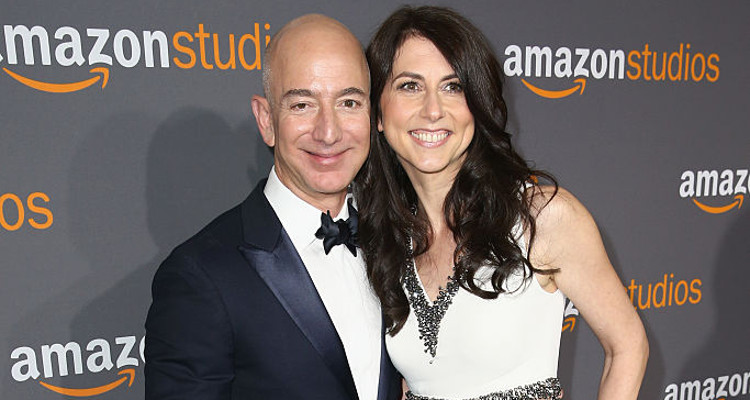 You may think that Jeff Bezos net worth of $55 billion comes entirely from his founding and subsequent profiting from online e-commerce giant Amazon, but he actually hasn’t stopped there. That being said, the biggest risk to his wealth may be his own generosity, having no problem opening his massive wallet to a worthy cause. Here’s a look at the how, why, and where of Jeff Bezos” net worth.

Jeffrey Preston Jorgensen was born in Albuquerque, New Mexico on January 12, 1964 to a family enjoying their ancestors’ gradual acquisition of over 25,000 acres of land in Texas, making him one of Texas’ biggest land holders. He likely learned some sense of the value of a dollar from his stepfather, who worked his way through university and eventually became an engineer at Exxon.

Bezos displayed mechanical skill very, very early, reportedly attempting to dismantle his crib as an infant. He would later help fix windmills and lay pipe during summers at his grandfather’s ranch and once even devised an electric alarm in order to keep his room off-limits. This talent began paying off upon his family’s move to Florida, where he became his high school’s valedictorian and a National Merit Scholar, attended the Student Science Training Program at the University of Florida, and won the Miami Herald’s Silver Knight Award, which is given to a select group of South Florida high school students for their school and community contributions.

Jeff Bezos would attend Princeton University, planning to take physics but ultimately obtaining a Bachelor of Science degree in computer science and electrical engineering. Upon graduation in 1986, he worked a computer science job on Wall Street at a company that had him designing an international trade network, at Bankers Trust, and finally at D. E. Shaw & Co.; while legitimate jobs, they’re not the kind that create a notable net worth. His next job was at a hedge fund, and after that, he would be self-employed—and he would never need another job again.

The year 1994 saw the founding of Amazon, devised by Bezos during a cross-country trip from New York to Seattle. Following learning about the massive sudden increase in internet usage, he quit the hedge fund job and set up what would become the king of e-commerce in his garage. In addition, a recent Supreme Court Ruling said that mail order catalogs did not need to collect sales taxes in states in which they had no physical location.

The Growth of Amazon

Amazon’s worldwide growth and success should go without saying to anyone with an internet connection and credit card and/or PayPal account. Over the years, Amazon has acquired numerous other sites that sell and handle a variety of products. In recent years, it has even become a producer of products and even unique content, including video games, its Kindle e-reader, and the Fire TV set-top box. The company has similarly set up its own streaming services, which includes its own films and TV shows created through Amazon Studios. Also notable is its plans to use drones, a service dubbed Amazon Prime Air, to deliver goods to customers, seen as an exciting but risky venture due to the possible theft and damage to the drones.

As of 2014, Amazon had revenue of almost $89 billion, with only $178 million in operating income. Bezos himself—he’s still the President, Chairman, and CEO—supposedly only receives about $1.68 million in compensation from Amazon. Most of his Amazon-related net worth comes from his shares in the company, selling one million shares in 2013 for a whopping $260 million.

But Amazon isn’t Jeff Bezos’ only source of net worth. In 2000, he created Blue Origin, a company devoted to space flight and the idea that “anybody can go into space.” Bezos has admitted he has played with the idea of humanity residing outside Earth, with an interest in one day building the likes of hotels, amusement parks, and even cities in space. While obviously not a profit source now, as we have yet to make space travel a public activity, the efforts put in by the likes of Bezos, Sir Richard Branson, and Elon Musk does make it seem like a legitimate possibility. His other big non-Amazon deal came in August 2013, when Bezos purchased The Washington Post for $250 million, a purchase made to be kept separate from Amazon.

But while for good reasons, Jeff Bezos’ net worth has taken some hits due to his penchant for charity. Counting donations made before he became wealthy, Bezos has reportedly donated $2,000 to the Republicans, $16,000 to the Democrats, and $55,000 to special interests. In 2012, he and his wife gave $2.5 million in an effort to help pass a referendum in Washington regarding same-sex marriage. An additional $42 million was given to support the first full-scale “Clock of the Long Now,” a lock designed to tell time for 10,000 years.

But don’t worry about donations making any sort of dent; the Amazon founder made $32.1 billion in 2015 alone. And with the continued migration to online shopping and the possible slow death of brick-and-mortal retail locations, Jeff Bezos’ net worth is nowhere near done increasing. That might be why tech exec Barry Diller, chairman at IAC (the company that owns sites like Vimeo, Match.com, and Tinder) predicts that Bezos could very well be on his way to becoming the richest man in the world “certainly within 5-7 years,” adding, “I think that’s hands down.”