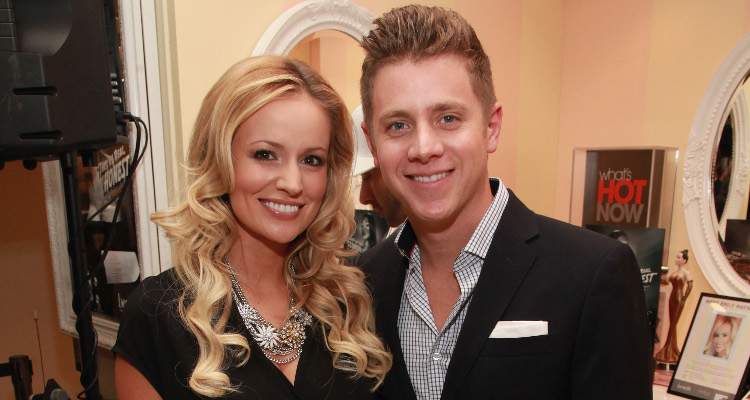 Arie Luyendyk Jr. is taking a second shot at love in the upcoming season of The Bachelor. The last time he was on the franchise, he lost Emily Maynard to Jef Holm. But where is Jef Holm now?

Jef Holm was the winner of Emily Maynard’s season of The Bachelorette, the same season she sent home newly crowned Bachelor, Arie Luyendyk Jr. who’s now back on the show and knee-deep in beautiful women. But what about his former mates from the Bachelor Mansion? Bachelor Nation wants to know what Jeff Holm is up to now. Is he stirring trouble for Arie’s Bachelor debut from the sidelines? Get the latest scoop here.

Emily and Jef got engaged at the end of The Bachelorette season 8 and were working out their relationship and future wedding plans while taking Emily’s daughter, Ricki into consideration. Jef even moved to Emily’s hometown of Charlotte, North Carolina and was reportedly bonding very well with Ricki.

But like most relationships in the franchise, their engagement was short-lived. A few months after their engagement, they broke up in October 2012. Emily has since married a Bachelor outsider, Tyler Johnson. They have three children together: Gibson, Jennings, and their youngest, Gatlin born in November.

As for Jef, he hasn’t had much luck finding love without the help of a reality show. Neither Jef nor Arie appeared in subsequent seasons of Bachelor in Paradise or any other franchise spin-offs. It’s no surprise that they slipped off Bachelor Nation’s radar for a while until Arie was announced the new Bachelor of season 22.

Mom will you buy me Rosetta Stone for French?

But the entrepreneur might be campaigning to revive Bachelor Pad with few of his franchise alums. Robby Hayes and Chase McNary, the famous studs of The Bachelorette season 12, moved into Holm’s residence in Venice Beach in April.

“We ended up after partying at his house,” Hayes explains. Jojo Fletcher’s former suitors were in town back then for filming Nick Viall’s Women Tell All special. “He said his two roommates were moving out and gave us the opportunity to move in.”

Right after he slapped my books out of my hands

While Hayes was soon flying to Mexico for Bachelor in Paradise, Jef and Chase became best buds. They show off their bromance on social media. Holm even showed some support for Hayes after his cheating drama with Amanda Stanton on After Paradise. Bachelor camaraderie at its finest!

The same can’t be said about Jef and Arie.

Emily’s top two finalists were close friends on the show. Throughout their season, these two were notorious for pranking their fellow contestants. “Jef and I had a pretty cool relationship because we could really talk about what was going on in the house pretty openly to each other,” said Arie back in 2012.

However, after the show ended, they had a falling out. Shortly after the race car driver was announced as The Bachelor 2018, Jef took a dig at his former friend in a tweet saying, “I stopped being friends with him years ago because he’s disgusting.” Eep! Strong words.

I've actually never even been inside a sorority house. As for him…I stopped being friends with him years ago because he's disgusting

Maybe Jef Holm could be the next Bachelor or at least fly to Paradise! Let’s face it, we’d kill to see him back on the franchise.

Until then, we’re going to stock up on popcorn and roses for Arie’s love quest when The Bachelor season 22 premieres on January 1, 2018.