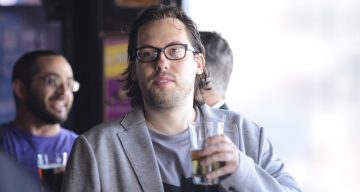 With more than three decades on air, The Howard Stern Show universe (as it’s called) is home to staffers who have become characters with their own fame. J.D. Harmeyer, the Sirius XM show’s producer, compiles TV and Internet events to make a highlights reel of recent happenings. But it’s his knack for entertainment and unique hooting laugh that made him a much-loved character on the radio broadcast. Our J.D. Harmeyer wiki has the deets on the adored Stern Show staffer.

Who Is J.D. Harmeyer?

Born Jamie Daniel Harmeyer on December 29, 1979, he turned 39 years old just before 2018 closed. He was born in Fairborn, Ohio and lived there until he was 12 before his family moved to Lakeland, Florida.

39th birthday dirt cake thanks to my lovely wife @jtankoharmeyer. Thank you everyone for your birthday messages

Harmeyer would come to New York City to intern at The Howard Stern Show in 2003. He impressed the folks at Sirius XM enough to land a full-time job on the show and settle in NYC.

He’s the head media producer on the show, tasked with collecting material from TV and the Internet for the highlights reel. He became famous for his signature laughter that sounds a lot like an owl hooting.

When he first came on the Stern Show, Harmeyer was a brand-new college graduate with an unassuming demeanor. Robin Quivers renamed him J.D. to toughen up his image. Over the years, Harmeyer has packed on a few pounds and his looks have matured.

A Sirius XM producer’s average salary could be upwards of $50,000 a year. Along with his job as a media producer and his radio personality status, Harmeyer has earned an estimated net worth of $100,000.

He Directed an It’s Always Sunny in Philadelphia Episode

After graduating from Lake Gibson High School in 1998, Harmeyer acquired a degree in film and video production from Full Sail University in Winter Park, Florida. When he was younger, he never thought he’d be working in a radio show.

I graduated from Lake Gibson High School in 1998. And in honor of my 1,998th tweet, I give you my Senior Class photo. http://t.co/ZQdoNtc

Growing up, Harmeyer wanted to be a filmmaker. He admires the likes of Oliver Stone, Quentin Tarantino, and David Fincher.

Jamie and his younger brother, Jason Harmeyer, were active in their school’s drama club. They both attended Full Sail, where they produced a sketch comedy project together.

While he loves his job on the Stern Show, Harmeyer’s filmmaking ambitions have often taken a backseat. However, the folks at FXX, who are fans of Stern, wanted to give him the opportunity to pursue directing.

Thanks to them, he made his directorial debut in 2015 by directing a scene on It’s Always Sunny in Philadelphia, which was also his first learning experience on the job. His big Hollywood introduction was documented hilariously for the Stern Show.

Check out J.D. working behind the scenes on Always Sunny below.

Since learning the ropes at FXX, Harmeyer has gone on to appear in and direct segments of Howard Stern on Demand. He also played the titular character in the TV short, Supertwink.

Harmeyer generally refrains from discussing his personal life on air. So, his relationship history is obscure, save for the Stern Show staff who know how to keep a secret.

After his colleagues had been dropping hints about Harmeyer’s SO for a while, the media producer finally went public with his relationship. He announced his engagement on Twitter and he’s now officially off the market.

Harmeyer tied the knot with Jennifer Tanko in August 2018. The intimate Vegas wedding had only 10 guests in attendance, including Harmeyer’s brother and parents.

Although the Stern Show staff weren’t invited, they weren’t bitter about it and celebrated his wedding news. Harmeyer even shared the first draft of his wedding vows on air before his wedding. Though he revised the vows during the real thing, including Howard’s valuable improvements.

His Wife Is a Makeup Artist

Virginia native Jennifer Tanko Harmeyer is a professional makeup artist and Instagram celebrity. While working in Baltimore, Maryland, she worked with MAC and trained at Towson University. She also has other cosmetic certifications such as threading.

Tanko loves working on brides and particularly LGBTQ weddings. She’s an advocate for LGBTQ+ rights and is fiercely supportive of her clients from the trans and drag communities.

She’s famous for her skills and as an LGBTQ-friendly vendor. Her popularity has earned her over 11.5K followers on Instagram and social media endorsements.

She took a brief hiatus in 2017, during which she moved to New York. Now that she’s all settled in with her new husband, Jennifer is working as a makeup artist again.

She also blogs about everything she loves, including food, fitness, travel, art, books, and politics. Tanko shares recipes and reviews of her favorite restaurants, health advice, and her thoughts on her blog.

Also Read: Amber Balcaen: Everything You Need to Know About the Only Racer on the New Show Racing Wives