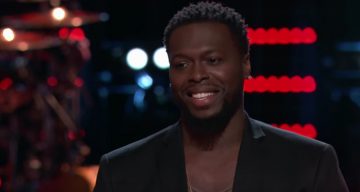 It’s the final week of the Battle Rounds on The Voice season 12, which means the competition just got tougher! The last Battle Round saw JChosen and Kenny P from Team Gwen go head to head, in which JChosen was announced as the winner.

On Monday (March 27) night’s episode of The Voice, JChosen and Kenny P from Team Gwen had to duel it out in the Battle Rounds. They sang Stevie Wonder’s, “I Was Made to Love Her” and JChosen was the surprise winner. It was a tough decision but Gwen Stefani sent Kenny P home. JChosen is one step closer to achieving his dream. Find out more about him in JChosen’s wiki.

Also Read: Vanessa Ferguson vs. Autumn Turner on “The Voice” 2017

He Comes from a Musical Family

Born Josh Hunter in Albany, Georgia, he performs on The Voice under the stage name JChosen. The 29-year-old graduated from Dougherty High in South Georgia. His family consists of his parents and aunts. His bio on NBC’s web site says he recently became a father, but is unable to spend much time with his son because his child’s mother lives three hours away from him.

His aunt, Geri Carpenter, spoke to a local news outlet saying that Hunter started his musical journey at church. “Joshua for a long time at age 11 or 12 was our only musician. He played the drums,” Carpenter said, adding, “He came from a musical family.” His family recognized his musical talent and encouraged him to pursue it, especially his mother, Gwen Hope. But his music career was stalled and he currently is an assistant to a special needs teacher.

Also Read: Lilli Passero vs. Lauryn Judd on “The Voice” 2017

He is a Former Basketball Player

Gifted with height, Hunter turned his main focus from music to basketball. He went to Appalachian State University and played power forward for the ASU’s Mountaineers, while studying criminal justice. Hunter played in 24 of the 31 games in his junior year. While playing for ASU, he had the opportunity to sing the national anthem before a game. Watch the video below.

But, he suffered an injury and that put an end to his sporting career, causing him to return to pursuing a career in music. He met a music producer who told him to sing at an open mic night. From then on, there was no stopping JChosen. When he’s not helping out special needs children, he’s traveling and performing on stage. He’s had many gigs in Atlanta before he made it onto The Voice.

His Family Raised Funds to Send Him to The Voice

Auditioning for The Voice is not as easy as simply getting on the stage and singing. Artists from all over the country come to the Blind Auditions and the journey is not an inexpensive one. Hunter and his family wanted to take his musical talent to a national stage and needed to raise funds so he could make it to the audition.

In order to raise funds, his family sold shirts in Albany, with some of the proceeds going to Hunters special needs students. The citizens of Albany were eager to help out one of their own and gave their contribution in helping JChosen.

He performed Marvin Gaye’s “Sexual Healing” at the Blind Auditions. While many singers would buckle under the pressure of this song, he impressed the coaches enough to get the first four-chair turn of the season.

Josh Hunter also doesn’t shy away from showing his roots. Every post on his social media account has the hashtag, #countryboyfromAlbanyGA. He also contributed to Albany’s relief efforts, since a tornado struck the town in January this year. Now that he’s established himself on TV, he’s got a bright future ahead of him. We think he’ll contribute more to his hometown once he amasses a substantial net worth.