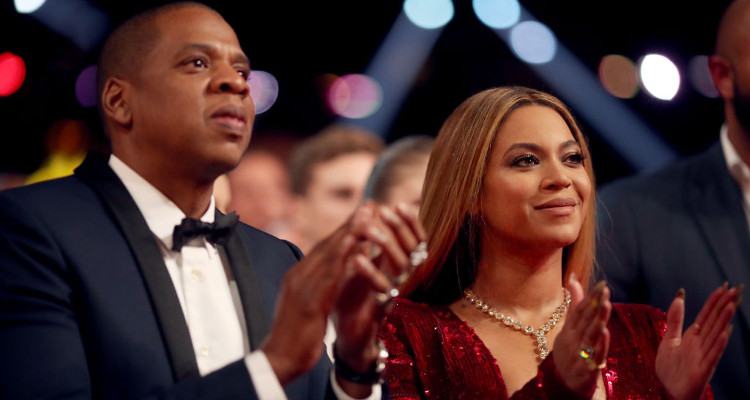 Jay Z is back with a newly tweaked name and a new album. Jay Z’s new album, 4:44 is going to add to his already massive wealth. Now the father of three is very close to surpassing Sean Combs with his net worth of $810.0 million.

Shawn “Jay Z” Carter is getting personal with his new album, 4:44. After his wife, Beyoncé gave birth to twins a couple weeks ago, he dropped his new album. With the attention it is getting, 4:44 is going to be just as successful as its predecessors. It could also add to Jay Z’s growing net worth of $810.0 million in 2017. Here’s a breakdown of the hip-hop mogul’s wealth in Jay Z’s net worth.

How Much Does Jay Z Make a Year?

The savvy entrepreneur has business ventures that substantially add to his wealth. It also helps that he’s got 12 mega-selling albums. According to Forbes, he earns a whopping $42.0 million annually.

The following table illustrates the earnings from his latest album sales.

Together with Beyoncé’s $350.0 million, the Carters are worth a whopping $1.16 billion and counting. Blue Ivy and her new siblings have a billion-dollar parentage!

How Does Jay Z Earn His Millions?

Long story short: From a lot of sources. Besides music, businesses like Tidal, clothing lines, a sports franchise, alcohol collection, startups, and exclusive deals are the many sources of Jay Z’s income. He says “my brands are an extension of me” which span a variety of industries. As his brand grows, he’s set to surpass Sean Combs as Forbes‘ richest “Hip-Hop Cash King” soon.

He owns the clothing line S. Carter Collection in collaboration with Reebok. His line Rocawear was sold to Iconix Brand Group for $204.0 million! Jay Z also owns the 40/40 Club, upscale sports bars in New York City, Atlantic City, and Chicago. The club is set to expand in different countries and airports. Let’s not leave out his major record labels, oc-A-Fella Records and Def Jam.

He’s a high stakes investor and has put money in businesses like the skincare brand, Carol’s Daughter. But his stakes in the Barclay’s Center made headlines when it was sold for $1.5 million. He also had a share in the Brooklyn Nets NBA team. However, once the share value reportedly declined from $4.5 million to a mere $350,000, he eventually relinquished his ownership.

In 2014, Carter invested $200.0 million in Armand de Brignac champagne. The brand has many celebrity consumers and makes him millions a year. He also signed a $200.0 million deal with touring giant, Live Nation to perform at major festivals and music events this year.

The 47-year-old owns a few record labels but when it comes to music distribution and Jay Z, one word comes to mind: Tidal. The subscription-based music streaming service was acquired by the emcee in 2015 for an unbelievable $56.0 million. The returns, even better.

The music service combines lossless audio and high definition music videos with curated editorial. The idea was to bring back the revenue to artists who once suffered losses to unrestricted streaming of their music. The artists themselves are the curators of the service with Jay Z as the biggest shareholder. Beyoncé, Rihanna, Kanye West, Drake, Nicki Minaj, Alicia Keys, Madonna and many more artists co-own Tidal. Sprint purchased 33% of Tidal for $200.0 million which raised the streaming platform’s value to $600.0 million, leaving Jay Z only $10.0 million short of surpassing Sean Comb as the richest hip-hop mogul.

All That Money and Nowhere to Spend It

You’d think with more than a billion dollars in the bank, life would be easy for the Carters. Sadly for them, life isn’t a bed of roses. The new parents of twins are house-hunting in LA and reportedly have a $100.0 million budget. Their list of must-haves includes all the facilities, privacy, and security money can buy. But even with a nearly unlimited budget, Jay Z and Beyoncé haven’t found their dream house yet. In the meantime, they rent luxurious properties.

But it’s not to say that the Carters don’t have any home(s) at all. His Hudson Street loft, worth $6.85 million, caused a paparazzi storm when it was falsely reported that he was marrying Beyoncé there. They sold their mansion in Florida which boasts of neighbors Enrique and Adriana Lima, for more than $9.0 million. Jay Z has rented several upscale properties over the years. He was known to be eyeing a few expensive estates in that past, but it’s not known if he closed the deal on any of them.

While the power couple is desperately looking for a permanent residence to settle in, they travel the world on their private jet. The couple also owns a fleet of cars, from Mercedes to Bugatti and everything in between.