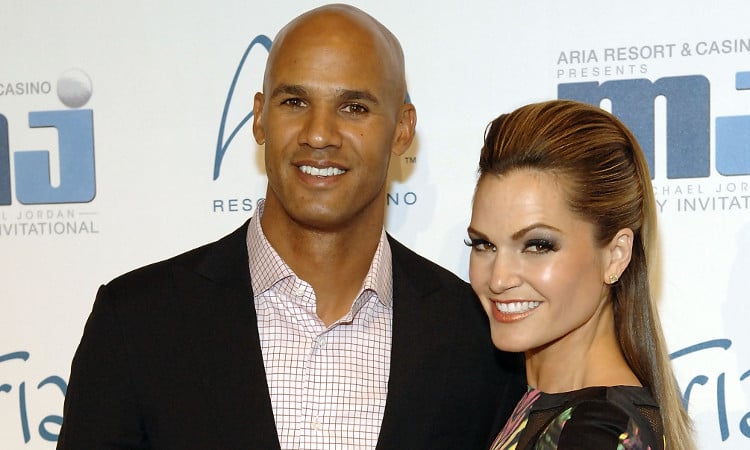 Jason Taylor may be out of the NFL, and though he never made it to the Super Bowl in his career, he’s earned a plaque in the Pro-Football Hall of Fame. But is Jason Taylor’s wife celebrating his proudest moment with him? Learn all about her, right here!

Jason Taylor was the best defensive playmaker in the history of NFL. That’s why, even if he doesn’t believe it, he deserves to be in the Pro-Football Hall of Fame! But the highest point of his NFL career is clouded by some other news. Jason Taylor’s wife, Katina Taylor, reportedly separated from him. Trouble in paradise? Find out about Jason Taylor’s divorce drama and more about his wife in our Katina Taylor wiki.

From Teammates to Brothers-in-Law

Former Miami Dolphin, Zach Thomas introduced his teammate, Jason Taylor to his sister, Katina. She grew up in Texas with her brothers, Zach and Bart. Both Zach and Katina graduated from Texas Tech University, where she earned her degree in broadcast journalism. Interestingly, Taylor’s sister, Joy Taylor works in sports broadcast on Fox Sports and Katina worked as a sports reporter at CBS’ Miami station.

Taylor and Thomas went from teammates to rivals when Taylor was traded to the Washington Redskins and Thomas joined the Dallas Cowboys. Both left their old numbers in Miami and wore the #55 on their new uniforms. Usually, #55 is meant for a linebacker and Taylor is a defensive end. But he did occasionally slip into the linebacker position.

Even his new teammates noticed he wasn’t comfortable wearing something other than the #99 he wore in Miami. Andre Carter, who wore #99 in the Redskins, offered Taylor to wear his old Dolphins number, but he politely declined on Katina’s advice. “I talked to my wife,” said Taylor. “[We] decided we’d let 99 stay in Miami and start a new chapter up here.”

She Wants to Help Children

Katina is proactive in doing her bit to help improve the lives of underprivileged children. She co-founded the Jason Taylor Foundation with her husband. The foundation ran an after-school program to increase literacy among inner-city children. They provided scholarships, screened inspirational movies for student-athletes, and even provided $300 back-to-school shopping certificates.

The former pageant queen has her own solo venture to help kids. She founded Camp Katina, a camp that teaches cheerleading, gymnastics, and life lessons to young girls. Camp Katina also conducts the annual outreach program, Cartwheels to Character.

She’s also a fitness and health enthusiast and looks simply fabulous at 40 years old. Katina’s got an exercise routine and diet to maintain her toned figure. She also writes a column for a Miami publication.

They Separated Twice Before

Jason and Katina have been married for more than 15 years and are parents to sons, Isaiah and Mason, and daughter, Zoey, who are all now in their early teens. Though they’ve been married for so long, their union was not without its ups and downs. In 2006, Katina filed for divorce from Jason citing irreconcilable differences.

An alleged photograph of Jason with another woman reportedly led to her decision. She requested custody of their children in the filings. However, she withdrew the divorce petition mere days before the scheduled hearing. They worked out their differences back then, but it appears their marital bliss was short-lived.

For Better or For Worse

In 2014, Katina splurged on an expensive property worth $1.3 million in Miami’s Plantation. She stated in documents that she was married back then, but Jason was not listed on the papers. In fact, the former footballer owns a mansion very close to Katina’s Plantation crib.

Recently, she was pulled over for expired tags on her Land Rover. Her driver’s license reads her current residence is the Plantation home she purchased in 2014. According to reports, Jason is staying in another home in The Enclave nearby. Their marital home at Miami’s Weston has been put up for sale, but the price of $3.85 million listed is lower than the $4.0 million the couple purchased it for.

Latest reports claim that the couple sped through the divorce proceedings long ago. The news broke out when it was revealed that Katina sued Jason for not paying spousal support in full. Jason reportedly has to pay her over $8.0 million in alimony, and is paying for child support and needs of their three children.