Sacha Baron Cohen’s new statement-making series, Who Is America?, is making headlines and catching the attention of people everywhere. But episode 2 featured one lawmaker, Jason Spencer, who displayed some jaw-dropping behavior.

A Republican state representative from Georgia named Jason Spencer had the misfortune of being one of the many guests that appeared on Sacha Baron Cohen’s Who Is America? on Sunday night.

The 43-year-old was elected to the Georgia House in 2010 from Woodbine.

He has invited backlash for his controversial behavior on the show. It involved pulling down his pants and shouting racist epithets.

Our Jason Spencer wiki elaborates more on the Georgia lawmaker.

Jason Spencer’s Who Is America? Appearance

Sacha Baron Cohen’s Who Is America? has been largely polarizing for duping unsuspecting participants, mostly political personalities, to come on the show. These people end up saying or doing extremely humiliating things, unaware that the man behind it all is really Cohen.

He appeared in the first episode where he proposed the plan of “Kinderguardians” and fooled gun-right advocates into expressing support for arming young children in schools.

Spencer was an otherwise lesser-known lawmaker. But he is known to be quite controversial and allegedly racist.

Born on November 14, 1974, Spencer is the incumbent in the Georgia House of Representatives representing District 180. He is married to a woman named Melaney and they are parents to two daughters, Madeline and Vera.

In Who Is America? episode 2, Spencer thought he was participating in anti-terrorism training for elected officials. What followed may have been the most cringe-worthy moment in recent TV history.

Advised by his “instructor” Morad, Spencer is seen practicing looking up the skirts of burkas for bombs. He then proceeds to pretend he’s a “Chinese” man, putting on an accent and yelling out random words connected to Asian culture like “chopstick” and “red dragon.”

Cohen, as Morad, tells Spencer to attract attention by shouting the N-word and he has no problem obliging. He screams the word a dozen times before Morad cuts in saying, “Are you crazy? The N-word is ‘Noony,’ not this word, this word is disgusting.”

At one point, Morad convinces Spencer that terrorists are most afraid of being turned gay. That led to Spencer dropping his pants and red boxer-briefs and literally bum-rushing Morad shouting “America!”

Spencer is not the most prominent personality to appear on the show. But his behavior prompted disparaging reactions from social media, particularly, since he tried to preemptively cover for his actions.

He Released a Statement Before the Show Aired

People who unwittingly became part of Who Is America? in the past have released statements to emphasize they were tricked into the appearances. They claimed that they were induced into saying and doing embarrassing things by Cohen in his many disguises.

Spencer also tried to preemptively defend himself before the show aired. In a lengthy statement, he said that he thought it was a real training video for “elected officials who may be targeted by terrorists.”

Spencer even threatened Showtime with legal action if the footage of him aired.

But reactions from the show’s viewers have been disparaging for Spencer. Internet denizens are shocked the man let himself be fooled so easily. Many felt that Cohen did a good job exposing Spencer’s racist tendencies.

This is QUITE a statement from Jason Spencer, a state rep from Georgia, also duped by Sacha Baron Cohen. Says he took part in an anti-terrorism training video, including “a kidnapping scenario where I was repeatedly asked to shout provocative language….” pic.twitter.com/2OUR6GEHEN

He Lost the Primary for Re-Election

Spencer was a physician assistant in family and emergency medicine before he became an elected official. He worked in the various emergency departments of Camden County’s hospitals.

He is currently in his fourth term in the Georgia House, which ends in 2019.

In 2017, he served on committees for Games, Fish, and Parks, Human Relations and Aging, Juvenile Justice, Science and Technology, and Special Rules.

But Spencer won’t be getting a fifth term in office anytime soon. He’s one of many Georgia incumbents who lost the primary election in May. Political newcomer Steven Sainz is running for Spencer’s office.

Jim Stein, a board member of the Camden County Republican Party is not surprised.

“I don’t recall we’ve ever had anyone with this much time in office with this much opposition,” Stein said. “He stayed at odds with the folks in Atlanta. It was obvious because of Spencer’s antics they weren’t going to work with him.”

His Controversial Run in Office

Stein said that Spencer’s provocative statements has hurt the Republican Party’s image and he was disliked by his colleagues. Before his Who Is America? appearance, Spencer had a history of inviting the ire of minorities and religious groups during his political run, which may be why Cohen brought him on the show in the first place.

Among the many bills he unsuccessfully proposed, one would end the law that requires gun owners to carry a concealed weapon permit. He also came under fire for the apparent “burka ban” he wanted to impose.

Spencer also had an infamous Facebook exchange filled with racial overtones with a former Democratic colleague, LaDawn Jones in 2017.

In the exchange, he reportedly warned Jones (who is a black woman) that she would “go missing” if she targeted Confederate statues in his Southern Georgia homeground. Spencer was condemned for this Facebook exchange, which was perceived as a threat to Jones.

Shortly after President Trump won the 2016 elections, Spencer proposed a bill that would ban any man or woman from wearing a veil in public, something that would extend to Muslim women’s attire.

Muslim advocates saw the bill as targeting them. The blowback led to Spencer abandoning the bill.

He said in his statement that he received death threats after proposing a ban on veils. He alleged that Cohen “took advantage of my fears that I would be attacked by someone inspired by the vile rhetoric used against me.”

But Spencer has successfully passed some legislations. He has also tried to improve legislations to help child abuse victims.

He Has Multiple Educational Qualifications

Spencer was born in Offutt Air Force Base in Nebraska and was raised with his siblings in a military family. His family moved to Moody Air Force Base in Valdosta, Georgia in 1978, and a year later, settled in a farming community in Alapaha.

His summer job as an elementary school student included picking peppers and cropping tobacco. After graduating from Berrien County High School in Nashville, Georgia in 1993, he attended Abraham Baldwin Agricultural College, Tifton, Georgia, where he was a tennis player. 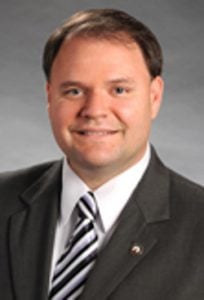 It earned him an athletic scholarship to Alabama State University. After transferring to the University of Georgia, he acquired his bachelor’s degree in exercise and sport science in 1997.