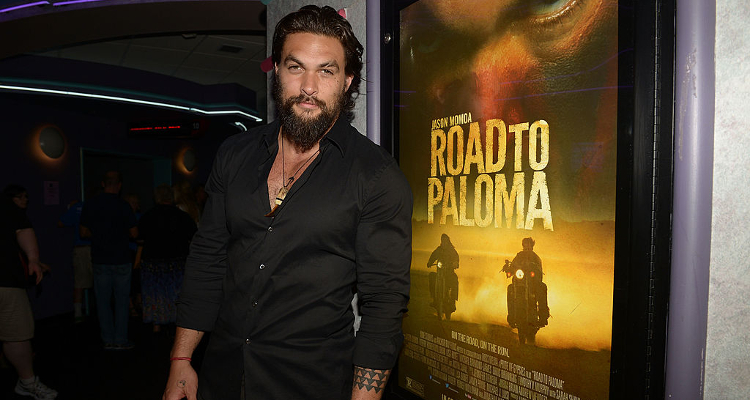 Jason Momoa is creating waves with his new Netflix original drama series, Frontier. The show only just premiered and the series has already renewed for a second season. But that doesn’t stop Jason Momoa from wanting season 3.

Jason Momoa is super excited about his new Netflix series, Frontier. The period drama set in 18th Century Canada was much-talked about —largely, in part, for the fact that the former Game of Thrones actor stars in it. Momoa will also play Aquaman in DC ‘s Justice League releasing this year. Aquaman will get a solo movie in 2018, but before we see Momoa communicating with fish, we need to binge-watch his groundbreaking Netflix series. Find out more about Jason Momoa’s new show Frontier and gush over his 18th Century outlaw look in his latest Instagram post.

The Hawaiian hunk plays the part-Irish and part-Native American outlaw, Declan Harp in Frontier. The action thriller based on warring factions fighting for control of the 18th Century Canadian fur trade shows Harp bludgeon his way to take the reins. Looks like being a ruthless Khal rampaging the plains in Game of Thrones proved to be handy practice for Momoa!

The series premiered on the Discovery Channel Canada in November 2016. A month earlier, the six-episode drama had been renewed for a second season.

Khal Drogo left GOT too early and there’s a long wait before he will be on the big screen, so fans are glad to see the 37-year-old as an imposing outlaw and swinging axes. As Jason Momoa puts it, the Netflix series is, “The funny version: me, wrapped in fur, covered in blood, killing English people, avenging my family’s death,” he said during the show’s Canadian TV premiere, “It gets a little bit more complicated than that, but to get us going, I now speak English, still covered in blood, and wrapped in fur.”

The series premiered on Netflix on January 20 to rave reviews about the dramatic premise, actors, and the hard-hitting theme music. Filming for the second season has also wrapped up and set to air soon. Meanwhile, Momoa is giving us a look at his Declan Harp costume and campaigning for a third season.

If you were to browse through Jason Momoa’s Instagram, you’re sure to swoon over his Greek God-like body. But the 6’4″ actor is also a gentle giant with sweet posts. Late Tuesday (February 7) night, he posted a picture from the set of Frontier where Blaine Halvorson, the creator of the MadeWorn clothing line, is working on Declan Harp’s outfit which he made by hand. 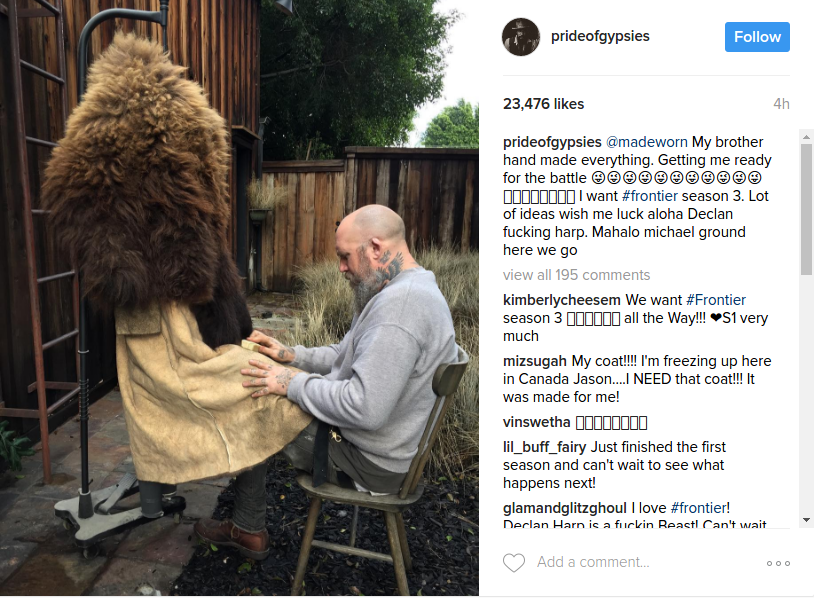 Momoa captioned the picture, “@madeworn My brother hand made everything. Getting me ready for the battle  #frontier season 3. Lot of ideas wish me luck aloha Declan f***ing harp. Mahalo michael ground here we go”. We’re rooting for Frontier season 3 too!

Justice League is scheduled to release in November 2017, and Aquaman in July 2018. Meanwhile, Frontier season 1 is available on Netflix now. Check out the dark and thrilling trailer below.