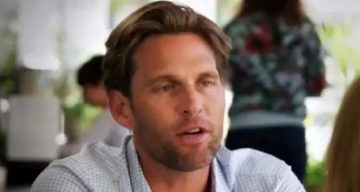 Tracy Tutor joined the cast of Million Dollar Listing: LA in season 10. As the first female realtor to join the show, she was bound to get attention, especially when she introduced her handsome husband, Jason Maltas, on the show! Keep reading our Jason Maltas wiki to know about their relationship and why it could be headed for divorce!

Million Dollar Listing: LA welcomed a new face to the real estate reality show. Tracy Tutor is an old player in the business but the first female realtor to join the cast. However, Tutor’s personal life played out on the Bravo show, along with her business dealings.

Tracy Tutor on Million Dollar Listing and husband Jason Maltas are in the process of a divorce, and now fans want to know more about him. Get the scoop on Tutor’s soon-to-be-ex, right here.

They’re in the Same Field

It’s a well-known fact that Tracy Tutor grew up in a wealthy family. Her father is successful businessman and investor, Ronald Tutor, whose net worth was estimated at $790.0 million in 2012.

However, Tutor is a self-made woman. She is among the most sought-after celebrity real estate agents in Los Angeles.

Tracy Tutor’s husband, Jason Maltas, is not doing too shabby, either. He’s a residential contractor in Los Angeles and works in the same field as his wife.

Maltas is currently the president of Gordon Gibson Construction, which is headquartered in Santa Monica, California. The firm makes custom homes for the rich.

While founder and CEO Gordon Gibson is the home building contractor, Maltas “provides the personalized attention and assistance to clients, before, during and long after the home construction process.”

Jason Maltas has built homes in Beverly Park, Beverly Hills, Holmby Hills, Bel-Air, Brentwood, Santa Monica, Pacific Palisades, and Malibu. And we wouldn’t be surprised if Tutor has sold some of her husband’s homes to her celebrity clients.

Not much is known about Jason Maltas’ early life and he doesn’t list his academic achievements on his LinkedIn profile. But his company bio reveals that the construction sector has always been a part of his life.

Maltas has over 20 years of experience as a building professional and has a knack for adding a personalized touch to his projects. His bio mentions that he appreciates all architectural styles and “brings a fresh view to every aspect of the build, helping clients make tough decisions while presenting unique styles and methods often overlooked.”

You can take a look at Gordon Gibson Constructions’ official Instagram page to check out Maltas’ work, and that of his colleagues.

Tracy Tutor and Jason Maltas’ kids are named Juliette and Scarlet Maltas. However, the girls don’t appear on the show.

A few episodes ago, Tutor met her husband for lunch on MDL, where they discussed work and their two daughters. The show revealed Tutor’s struggles balancing a demanding career and her personal life.

During lunch, Tutor mentions that her youngest daughter is in the second grade, but her husband corrects her by saying that she’s in the third. That’s enough for her to break down in tears!

Not all struggles happen in front of the camera. Shortly after that episode, reports broke that Tracy Tutor filed for divorce after 13 years of marriage. Court documents cite “irreconcilable differences” as the reason.

Although the news came as a shock to many, according to reports, the divorce was an amicable decision. Maltas and Tutor signed a prenup that stipulates a “50/50” split of their assets.

According to reports, neither are contesting for spousal support and have requested joint custody of their kids. Despite Tracy Tutor and Jason Maltas’ divorce proceedings, the duo remains close friends.

Just days before the announcement, Tracy Tutor shared a family Christmas picture with Jason Maltas and their kids on Instagram. And they even went to watch Hamilton together.