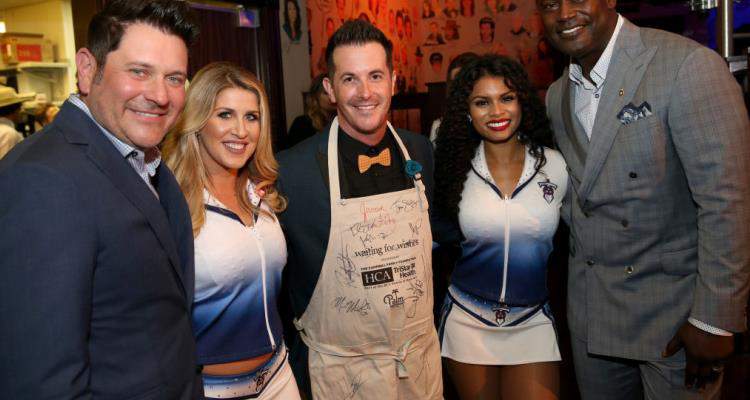 A few years ago, Jason Fitz of The Band Perry completely changed his career trajectory by embarking on an unexpected journey. He quit playing music altogether and decided to pursue a career in sports broadcasting instead. Continue reading our Jason Fitz wiki to learn about how he went from being one of the most talented fiddle players in the music industry (and touring extensively with a famous country band) to realizing his passion for sports and scoring a coveted co-hosting radio gig on ESPN national radio.

It’s clear that very few people are capable of successfully maneuvering from one drastically different career path to another, but it seems that Jason Fitz has made a seemingly effortless and admirable habit of doing just that. The former professional musician initially made his claim to fame by playing the country music game. Known most prominently in the country music world as the former fiddle player for The Band Perry, Jason Fitz officially traded in his fiddle for a radio microphone and a broadcasting studio a few years ago. Keep reading our official Jason Fitz wiki to learn about his reason for turning his back on an illustrious career as a musician and breaking into the sports broadcasting medium.

Jason Fitz’s, The Band Perry, & Why He Gave It All Up

The reality is that musicians tour endlessly in order to promote new projects and albums. This can sometimes take a huge toll on their personal lives and for Fitz, it got to the point where he was rarely ever home and hardly got to spend any time with his family and friends. In fact, it was Jason Fitz’s wife, Sunny, who helped him come to the difficult conclusion that he should give up this nomadic lifestyle and trade it in for something that would allow him to spend more quality time at home and enjoy more flexible working hours. Aside from the lack of quality time spent with his family, Jason also admitted that he was feeling a lot of pressure as a result of the rigorous formal musical training he received at Julliard. On top of The Band Perry’s extremely strict and demanding touring schedule, Fitz essentially lost his passion for music and was beginning to feel trepidation every time he had to do a live performance. There’s no doubt that it’s incredibly terrifying for someone of Jason Fitz’s age to make such significant career changes so late in the game, but considering he’s managed to be successful at it, it’s obvious that he’s finally hit his stride!

Jason Fitz’s transition from revered country music star to sports broadcaster hasn’t exactly been without incident. As much as he’s managed to effortlessly combine his penchant for being soft-spoken and opinioned, he’s also managed to put his foot in his mouth more than a few times since he made the switch. The most notable incident took place during an appearance he made on ESPN’s Ryen Rusillo Show in July of this year. A fan who called into the show asked Fitz which country music musician or industry mogul he’d most like to punch in the face if he had the chance. Fitz’s answer was none other than one of country music’s most beloved superstars, Alan Jackson!

Rather than willingly playing into this listener’s pettiness, Fitz could’ve easily refused to answer the question or move on to the next caller. Instead, he took this as an opportunity to air his grievances regarding the one time he actually participated in a live performance with Jackson. This was a move that could’ve irreparably damaged his career if he’d remained in the country music realm. Fortunately, Fitz has secured a pretty sweet deal with ESPN and effective January 2nd, 2018, he’s being promoted to being a national sports broadcaster for lucrative sports station! You can catch Jason Fitz co-hosting ESPN’s new radio show called “Spain and Fitz” with Sarah Spain every weeknight from 5:00 p.m. to 8:00 p.m. CT.