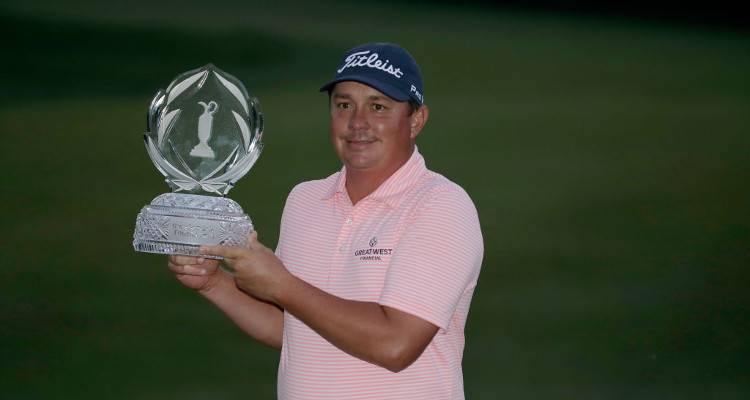 Jason Dufner is a celebrated professional golfer, who just won the fifth PGA Tour of his career. While many thought he didn’t stand a chance, he took home the trophy in Sunday’s Memorial Tournament game.

Jason Dufner is unstoppable! After losing his big lead in Saturday’s game of the Memorial Tournament, many didn’t think he stood a chance to win. But, as he defiantly prophesied, “I’m still in this tournament.” On Sunday (June 4), he received the ceremonial greeting and handshake along with the coveted trophy from tournament host, Jack Niklaus. He battled two rain delays at the Muirfield Village Golf Club and pulled off a final-round four-under 68 to win the fifth PGA Tour tournament of his career. He’s being lauded for not losing sight of the big picture. There was a time when many thought the pro-golfer might not be able to focus on the game because of relationship troubles. He proved people wrong then, too. But is he in a relationship now? Who is Jason Dufner’s girlfriend in 2017? Take a look at Jason Dufner’s relationship history to learn more.

Who is Jason Dufner?

Jason Dufner is an Ohio native and is the only other golfer from his home state, besides Jack Niklaus, to win a Memorial Tournament. His family moved to Florida when he was 14, and he began playing golf as a sophomore in high school.

His amateur career began as a walk-on at Auburn University in Alabama, where he earned All-SEC and All-American honors. After graduating with a degree in economics, he began his professional golf career in 2000.

According to his bio, the first eight years of his career included “five trips to Q-School while bouncing back and forth between the Web.com and PGA Tours.” His breakout season came in 2009 when he finished 11th in the FedEx Cup. In 2013, he won his maiden PGA Championship. He won his fourth PGA Tour title in 2016’s CareerBuilder Challenge.

He’s known for his incredible focus in golf. But what about his life off the golf course? Who is Jason Dufner dating?

Dufner had been in a relationship with a woman named Amanda Boyd when he was at Auburn and she was studying at Alabama University. They met in 2009 through mutual friends. He proposed to her on the 4th of July, and they married in May, 2012. They became known as Alabama’s First Couple and the PGA’s Power Couple for being so in love and supportive of each other.

But their marital bliss was short-lived, as they announced their divorce in 2015. Documents indicated “irretrievable breakdown of the marriage” and “a complete incompatibility of temperament that the parties can no longer live together.” Boyd got almost $3.0 million as a divorce settlement. But shortly after that, rumors began circulating that she was having an affair with golf legend and infamous playboy, Tiger Woods.

Woods’ reps vehemently denied the claims. But neither Woods nor Dufner refuted the affair rumors. The two golfers played practice rounds together at the British Open in 2015, which speaks louder than any reps. Since the two remained good friends, it’s clear that nothing happened between Woods and Dufner’s ex-wife.

After his divorce from Amanda Boyd, Dufner wasn’t quick to jump back into the dating pool. He reportedly wanted to focus on building his golf career, and everybody could see it. However, he apparently made time for romance in his life.

The Cleveland Cavaliers tweeted a picture of the 40-year-old at one of their games last year. The golfer had a beautiful date that got everyone talking. Currently, there’s no information on Jason Dufner’s mystery woman or whether they are actually together. Her identity is unconfirmed, though some people claim her name is Jessica. Details about his girlfriend have been well hidden, so we can only hope that either Dufner or Jessica confirm their relationship soon!