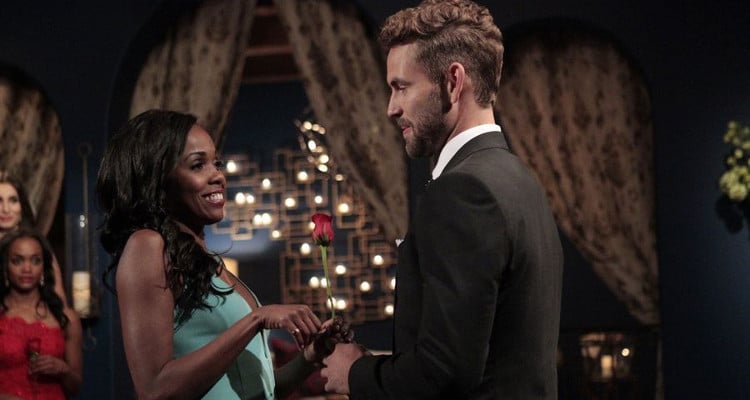 Nick Viall is hoping to end his string of unrequited love on The Bachelor season 21. Among the remaining hopefuls for his heart is 29-year-old Jasmine Goode.

After three failed runs on The Bachelorette and Bachelor in Paradise, Nick Viall, a 36-year-old software sales executive from Wisconsin, gets to be the man of the hour on The Bachelor season 21. This time, 21 ladies are left hoping to win a Neil Lane engagement ring from him. Among the ladies still in contention for his heart is Jasmine Goode from San Francisco, California. We’ve seen our fair share of crazy made-up jobs on The Bachelor franchise. So we’re curious about the ladies’ professions this season. What does Jasmine Goode do for a living? We’ve got the details right here.

According to Goode’s profile on ABC’s Bachelor web site, she is a professional basketball dancer. In the past, we’ve had many cheerleaders (both professional and aspiring) on the series. Melissa Rycroft from season 13 of The Bachelor is a former Dallas Cowboys cheerleader. Winner of season 6, Mary Delgado, is a Tampa Bay Buccaneers cheerleader-turned-real-estate-agent. Last season, professional “twins” Emily and Haley Ferguson were aspiring cheerleaders.

Since Goode lives in San Francisco, it’s a major clue which NBA team she’s affiliated to. Goode is currently a professional dancer for the San Francisco Golden State Warriors. According to the Golden State Warriors’ web site, she has been on the team for a year. But Goode’s no newbie to the professional sport dance scene. Before the Warriors, she was a cheerleader for the Dallas Cowboys, and was also a dancer for the New York Jets.

“Find something you love to do and then… do it for the rest of your life” –Max Fischer, Rushmore. 💛💙Happy #NationalDanceDay friends #gswdanceteam #dubnation

What is Jasmine Goode’s Net Worth?

It’s not an easy life for NBA dancers. Their income isn’t as high as the players they’re cheering on. An NBA dancer can get paid anything between $50 to $100 per game depending on their level of experience, and the prestige of the team. Dancers can be booked for additional appearances at parties and PR events which pay more.

NBA dancers have an intense life. Other than the rigorous practices and rehearsals, they have to maintain their physical appearances which involve working with the team’s trainer, intense cardio, and extensive dance classes. They also have other jobs for additional income. These dancers lead a stressful life. Goode had to go through a three-day audition, a boot camp, and a six-week training camp before becoming a dancer for the Golden State Warriors.

Jasmine Goode’s net worth is undetermined at the moment, but her work ethic is clear since she made such a difficult job her full-time career. Perhaps she can launch her career as a reality star, model, or celebrity after The Bachelor.

She Started Dancing at 6 Years Old

Goode was born with a clubbed foot, and her doctor suggested dance classes, as dancing would help strengthen her foot, allowing her to walk normally. At six years old, Goode was taking ballet, tap, and jazz basics.

“It was something my mom put me in to help, but I fell in love with it. When I’m dancing and performing, I feel comfortable and feel like myself. No one is judging me, it’s fun, and I love it,” she said in an interview with Prodancecheer. Goode’s passion for dance continued all throughout high school and college before she made it into her first professional cheerleading team.

She Was Part of the Disney Cruise Line

The Bachelor contestant spent two years with the New York Jets Flight Crew Cheerleaders. During her time with the Jets, she did a calender shoot in Aruba. Sometime later, she auditioned for the Disney Cruise Line and traveled the Mediterranean and Caribbean seas as Princess Tiana from The Princess and The Frog.

“Disney was great. I mean, I got to be the first African-American princess, which is awesome. It wasn’t cheerleading, but I got to get back to my dance roots and perform on a stage as part of a wonderful show,” Goode said.

After playing a Disney princess, Goode returned to cheerleading. She auditioned for the Dallas Cowboys, and after a summer-long audition, made it into the 2012-2013 team. She was part of the team for three seasons, but at her fourth season audition, she was cut from the Cowboys. That wasn’t the end for Goode who went from an NFL cheerleader to an NBA dancer.

And that's another @dallascowboys win for ya! 🎉💙#throwinItBack #cowboys #DCC

Jasmine Goode will show off her moves while dancing with the Backstreet Boys on episode 3 of The Bachelor. Don’t miss the drama every Monday at 8:00 p.m. EST only on ABC.