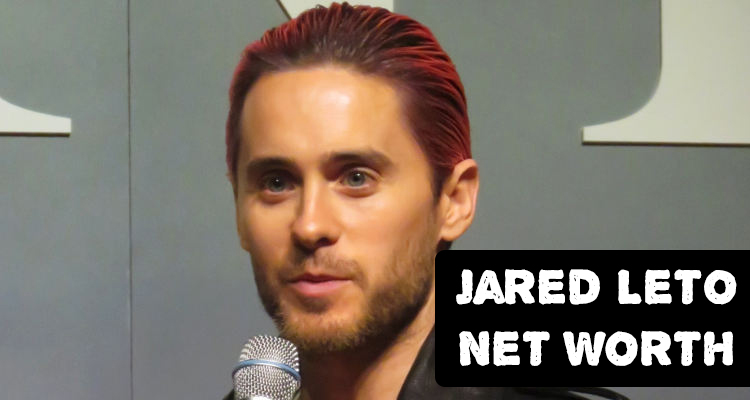 It is no joke that Jared Leto’s net worth is estimated to be around $40.0 million. Most of his revenue comes from his movies and his band, Thirty Seconds to Mars. We wonder how rich is Jared Leto, especially after signing up for the role of Joker in Suicide Squad. If you also want to get some information about Jared Leto’s net worth, then you know what you have to do, just keep reading!

How Rich is Jared Leto?

He was born Jared Joseph Leto on December 26, 1971, in Bossier City, Louisiana. His mother is Constance Leto; his parents got divorced when Jared was a just kid. He and his older brother Shannon were raised by his mother and maternal grandparents. After his parents had got divorced, it was claimed that Jared’s father remarried and later committed suicide when Jared was eight years old. Since his grandfather was serving in the Air Force, they used to move frequently. So growing up, he has visited a lot of places. Jared also has two half-brothers from his father’s second marriage.

There was a time when Jared, his mother, and brother lived off food stamps and were too poor to even afford a TV. But, things changed when Constance married a Dr. Carl Leto, an ophthalmologist. He adopted Jared and Shannon, and that’s how they came to have his last name.

Since Jared was a very young age, he was fascinated with music; he started playing at very early in life, and his first instrument was a broken-down piano. His mother was his source of inspiration and convinced him to pursue his dreams. In one of the interviews, he said, “I was raised around a lot of artists, musicians, photographers, painters and people that were in theater.” He further said, “Just having the art communal hippie experience as a child, there wasn’t a clear line that was drawn. We celebrated creative experience and creative expression. We didn’t try and curtail it and stunt any of that kind of growth.”

When Jared was in the tenth grade, he dropped out of his school and decided to complete his education at the Emerson Preparatory School, located in Washington D.C. He finished his graduation from Flint Hill School in Virginia. Jared then enrolled himself at University of the Arts in Philadelphia to pursue large-scale visual art. However, his interest changed and he wanted to study film-making. He took a transfer to the School of Visual Arts in New York City. While studying, he wrote and acted in his own short film, Crying Joy.

Although Jared is mostly famous for his movies, he also has a band called, Thirty Seconds to Mars. In the year 1998, he started his band with his older brother, Shannon Leto. Although it has been eighteen years, the band is still going strong and continues to captivate audiences with their amazing songs and performances. The members of the band are Tomo Milicevic, Jared Leto, and Shannon Leto. Jared plays the guitar; Tomo plays the violin and Shannon plays the drums. The band has made several hit albums such as 30 Seconds To Mars (2002), Love, Lust, Faith, and Dreams (2013), This Is War (2009), and A Beautiful Lie (2005). Although Jared had started acting in movies long before his band started, he made sure he did not use his already established fame for promoting his band.

Jared is a well-established actor and his first movie was called, How to Make an American Quilt, a comedy that was released in the year 1995. He has acted in several minor and major movies such as, American Psycho, Requiem for a Dream, Dallas Buyers Club, Cool and the Crazy, The Last of the High Kings, Switchback, Prefontaine, Basil, Urban Legend, The Thin Red Line, Black and White, Girl Interrupted, Fight Club, Highway, Panic Room, Alexander, Lord of War, Lonely Hearts, Chapter 27, A Beautiful Lie, Mr. Nobody, Hurricane, and now, Suicide Squad.

Jared recently purchased a military compound that has been transformed into a mansion, which is worth $5.0 million. His home is 50,000 square feet and has eight bedrooms and twelve bathrooms. Jared is also obsessed with cars and bikes. He has a Ducati 1100s motorbike and he also has a 30S TM car.

Jared Leto is a fine example of how pursuing your dreams with determination and perseverance can make your rich and famous, especially when you come from nothing. He is a source of inspiration for many and we hope he continues to entertain us with his amazing movies and music.