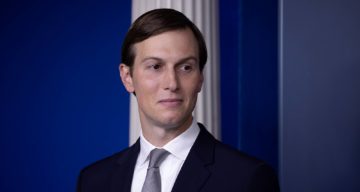 With the U.S. Presidential election drawing closer, there is a lot of interest in Donald Trump’s family. People are asking “Who is Ivanka Trump’s husband?” He is the towering 6’3” real estate magnate, Jared Kushner. Everybody knows that Ivanka Trump’s net worth is $150.0 million but what is Jared Kushner’s net worth? Well, it is actually a whopping $200.0 million! Talk about the rich getting richer! Find it hard to believe? Then check out Jared Kushner’s wiki page on the net. The man is swimming in money. The media has zeroed in on Donald Trump’s son-in-law ever since he has taken an active part in Trump’s presidential campaign.

Though Kushner has married into big money, he himself comes from a wealthy family. He is the eldest son of real estate developer, Charles Kushner and his wife Seryl. So, what is Jared Kushner’s age? He is just 35-years-old and has already made a killing, as far as business deals are concerned. When he was just 26, Kushner made the most expensive single building purchase in U.S. history (at the time). In 2007, Kushner bought the 666 Fifth Avenue building in New York for a staggering $1.8 billion. Talk about making big moves! Since then, Kushner has expanded his business even more. He owns the real estate holding and developing company, Kushner Properties. Kushner has spent at least $7.0 billion buying New York estate between 2007 and now.

He has interests in the media, as well. In 2006, he bought The New York Observer for $10.0 million, creating a flutter in media circles. Since then, he pushed for higher sales and converted the weekly newspaper into a tabloid. While the sales have increased and the publication is making a profit, there are complaints that the quality has gone downhill. Kushner doesn’t feel that way as his eye is on the money. Kushner has increased the paper’s online presence, as well. With all these feathers in his cap, Kushner is now in the spotlight due to his relations with the Trump family. He wants to shake off the title of ‘Ivanka Trump’s husband Jared Kushner’ and be known for his own self. That won’t be easy considering the fame that his in-laws have.

Kushner studied at the Jewish private Frisch School in New Jersey, before joining Harvard College in Cambridge, Massachusetts. Later on he completed his MBA from New York University. Despite his heavy involvement in business (and now in politics), Kushner makes sure he takes time to spend with his family. He and Ivanka have three kids, a daughter and two sons. Not much is known about Kushner’s private life but that could change rapidly now that election day is near. Like they say, the first casualty of politics is your anonymity. The funny thing is that all his life Kushner has supported the Democratic party, but now is batting for a Republican.

Kushner’s family has been in trouble with the law earlier. His father was sent to federal prison in 2005 on charges of tax evasion. Some people have accused Kushner of having a murky background, which is possibly the worst thing to have in American politics. So all eyes are on Kushner to see how he comes out clean from this dirty affair.