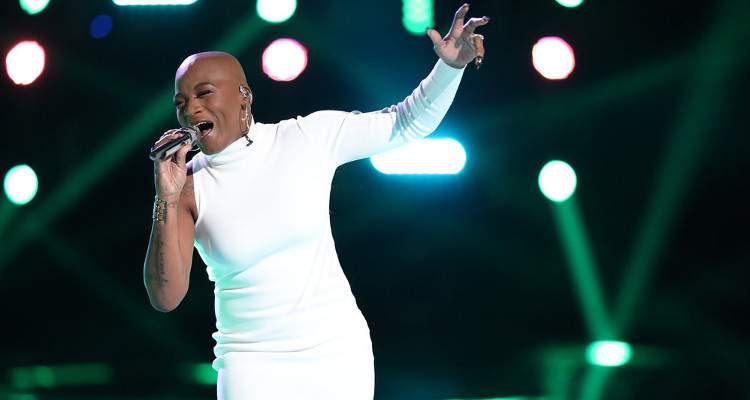 If you’ve been rooting for Team Miley on The Voice 2017, you should be familiar with Janice Freeman. The vocal powerhouse had to fight to save herself from elimination this week, but she lost. However, she fought and won another important battle in her life.

What is it with The Voice eliminations this season! Another fan favorite was sent home after the Instant Twitter Save vote. Janice Freeman came on The Voice and moved everyone with her emotional life story and her amazing talent. Janice Freeman fought cancer and made it to the auditions on the show. So, Janet Freeman is a cancer survivor and here’s more on how she fought it out bravely, along with her status in The Voice.

If there’s one moment that stole The Voice season 13 premiere, it was when the 32-year-old Janice Freeman came on stage and gave her spin on Imagine Dragon’s “Radioactive.” While her talent shone, her appearance also caught some attention. Fans began asking if the Compton, California native was a transgender but that rumor is far from true.

Freeman has been through ups and downs in her life and came out fighting. She was 21 when she gave birth to her daughter, Hannah. But when Hannah was four years old, her father passed away from cancer and Janice was left to raise her daughter alone.

Despite the difficulties, she believes being a mother made her stronger, which helped her fight when she was diagnosed with cervical cancer in 2012. She fought her illness and won and was ready to give music another go. At her Blind Audition, she said that singing had been a major part of her life, but cancer is one of the many obstacles that almost derailed her passion for music. Her survival story prompted Miley Cyrus and Jennifer Hudson to come on stage and hug her.

My life. ❤️My world. My everything. My Hannah! ?? #thevoice #teammiley #grateful #janicefreeman

In the midst of her cancer battle, she met her very supportive husband. As of her Voice audition, they have been married for two years, and he also performs with her and her band at their local gigs in California.

She may have been eliminated on Tuesday (November 28) night’s episode, but she’s already an inspiring personality. Her daughter has turned into a mini-celebrity thanks to her mother’s stint on The Voice.

Davon I love you so much! Thank you for being with me THE WHOLE DAY! I speak LIFE, LOVE, PROSPERITY and ABUNDANCE in youe life for the way you blessed, protected and loved me ♡ @davonflemingofficial #janicefreeman #teammiley #season13 #thevoice #nbc #teamjhud #thevoicefamily

“When I pick her up from class, the kids are like, ‘Oh, my God, Hannah, that’s your mom? She’s on TV,’” says Freeman adding, “And Hannah is like a little star, it’s so cute. It’s so cute to see these little babies inspired and you can’t put a price on it.”

Janice Freeman is definitely an inspiration. Even if she’s no longer on The Voice,  there’s no stopping now to her career in music!