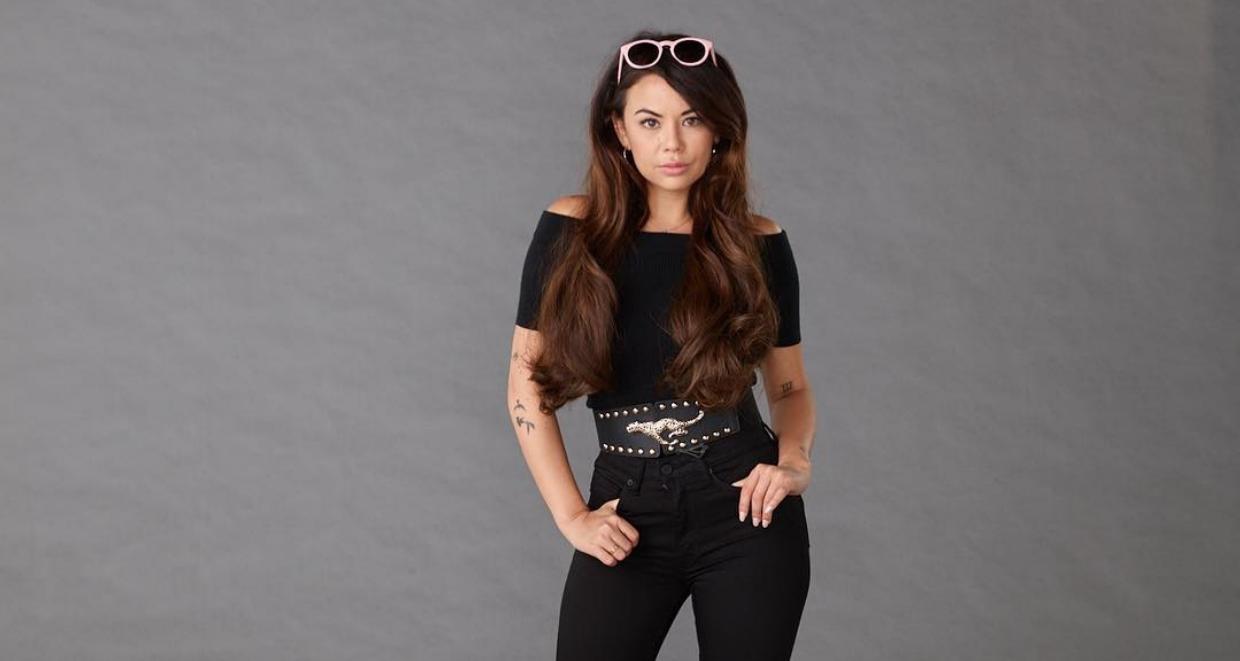 Janel Parrish as Sandy in a Toronto production of "Grease". Credits:Instagram/janelparrish

There’s another “Pretty Little Liar” wedding on the horizon. Janel Parrish is the next starlet from the show to get engaged. She’s better known by her on-screen persona, Mona Vanderwaal, which earned her immense popularity and a net worth of $700,000.

Mona Vanderwaal is engaged in real life! Janel Parrish, who played the startling game-player in Pretty Little Liars is engaged to Chris Long, her boyfriend of over a year.

There’s not much known about her non-celebrity fiancé. But, we can never get enough of Chris Long’s fiancée, Janel Parrish.

Here’s everything you need to know about the starlet who won the A-game on Pretty Little Liars in Janel Parrish’s wiki.

Parrish Is of Mixed Heritage

Janel Meilani Parrish was born in Honolulu, Hawaii, to Joanna Mew and Mark Phillip Parrish. Her sister, Melissa Nohelani, is eight years older and served in the U.S. Army.

Parrish’s mother is of Han Chinese descent while her father has European ancestry. Among her many tattoos, Parrish has one as a tribute to her home state of Hawaii.

While working on the show and between her packed schedule, Parrish manages to keep fit with her parents’ help.

Parrish explained, “I’m lucky to have parents who used to be bodybuilders!” She continued, “They help me keep fit by going to the gym and training with me. I’m also addicted to Cardio Barre classes and hiking.”

Her mother reportedly worked at a Honolulu health club.

So as a very EARLY birthday present, my parents compiled all my old videos of every performance I did growing up. ? Best gift ever. And now…here is a very sassy 5 year old Janel singing Mele Kalikimaka. Enjoy.

Phantom of the Opera Led Her to Acting

Parrish was six years old when she saw a local production of the Phantom of the Opera and was enamored with performing. With her newfound passion, she learned the piano, singing, acting, and tap and jazz dance. She entered talent contests and became a local celebrity.

At 14, Parrish performed in the Star Search reboot where her performing aspirations got a push. So after her freshman year in high school, Parrish moved with her family to Los Angeles for her entertainment career. And while she was homeschooled, she worked on making it in the industry.

#tbt to baby J as Little Cosette singing about castles in the clouds. #lesmizkids

Parrish got her break playing “Young Cosette” in the Broadway production of Les Miserables. And after gaining significant credits in theater, she got her first TV role in two episodes of Baywatch.

The talented performer later appeared in Disney’s live-action version of Pinocchio called Geppetto. Parrish made minor appearances in shows like The O.C., The Bernie Mac Show, and Zoey 101.

After her first movie role in Bratz, Parrish signed with the William Morris Agency and earned a recurring role in Heroes. But her breakout role came playing Mona Vanderwaal on Freeform’s Pretty Little Liars, a role she’s set to reprise in the spin-off, The Perfectionists.

The first shot from my upcoming project with my darling @glennnutley!! Mane and shot by @glennnutley Face by @juliannekaye Styled by @adeel_k Production by @bpmajor More coming soon!!!

Parrish Is a Songwriter

While expanding her theater and TV credits, the 28-year-old pursued her musical aspirations, too. Parrish won a statewide music competition in Honolulu at the age of eight, and by her teens, she was already writing her own music. At that time, she was also the lead singer of a female trio, Impulse.

In 2007, Parrish signed a solo recording contract with Geffen Records and began work on her debut album. That same year, she released her first single, “Rainy Day,” following it with a music video. The song also featured on the Bratz movie soundtrack, and Parrish lent her vocals to other songs on the soundtrack as well.

Parrish released “Heart Made of Stone” and “Senseless” in 2015, both of which she co-wrote. She hasn’t released any new albums recently, but she has sung on soundtracks during her TV appearances and theater productions.

Janel Parrish can also shake a leg. Before Sasha Pieterse, she competed on Dancing with the Stars in season 19. Together with her pro-partner, Valentin Chmerkovskiy, she made it to the finals and finished third.

Her vibrant performing credits and fame as the mysterious “A” on PLL earned her an estimated net worth of $700,000.

Covered @hiluxurymag for the month of October 🙂 Get your issue now to learn more about me! Glammed by amazing @glennnutley styled by @kylekagamida and shot by @haroldjulian ?

Parrish Auditioned for Spencer on PLL

We can’t imagine anyone other than Janel Parrish as Mona and Troian Bellisario as Spencer Hastings. While Bellisario said she thought she blew her audition, Parrish almost landed the role as Spencer. But Parrish was busy with another project and had a few callbacks.

Parrish said in an interview, “And then didn’t get it, and I was very sad because I loved the script.” She continued, “And then about a month later, I auditioned for Mona and that’s the part I booked. But it’s crazy to think of it as any other way [now]. I think everything worked out. I’m in love with my character and in love with the show.”

Yes, it does look like it all worked out for the better!

The multi-talented artist has been linked to her male PLL castmates and had a few romances in the public eye. She dated Payson Lewis and musician Justin Altamura, and she was romantically linked to Val Chmerkovskiy.

Year one down. The happiest. Can't wait for what's to come @janelparrish

Long doesn’t appear to be a celebrity and everything we know about him is through his Instagram. He recently celebrated their first anniversary with an adorable slideshow on Instagram. Soon after, Long dropped on one knee and proposed.

Parrish, who’s in Toronto where she’s playing Sandy in a theater production of Grease, gushed about his sweet proposal. They were walking her dog Klee in the park when he proposed.

“He got down on one knee and I just dissolved into tears! Perfect moment!” she said.

I can’t stop staring at it. I mean… @jeandousset you out did yourself ?And @c_long you did GOOD.

The excited bride-to-be and her new fiancé announced their engagement on Instagram. And Parrish even shared a picture of the blinding bling Long gave her. The sparkling ring was a creation by jewelry designer, Jean Dousset.

Janel Parrish’s Bratz co-star, Skylar Shaye, was among those who showered her with congratulatory messages.

We couldn’t be happier for this pretty little couple.