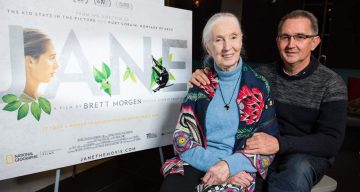 National Geographic dug deep into its archives to put together perhaps the greatest documentary ever made about an inspiring woman. Jane explores the journey of a young Jane Goodall. Thanks to the documentary, the attention is now on Jane Goodall’s son, Hugo Eric Louis van Lawick, who she fondly calls “Grub.”

The 2017 documentary delves into Goodall’s journey, from leaving England to studying primates in the African wild. Jane also describes her experience in raising her son while working.

In 1960, a 26-year-old debutante named Jane Goodall left England and embarked on the path to becoming the world’s leading primatologist. After spending two years in the African wild with chimpanzees, she met Baron Hugo van Lawick. The 25-year-old nobleman working as a wildlife filmmaker was tasked by Nat Geo to film all of Goodall’s work.

The couple got married on March 28, 1964, in London, and lived in Tanzania. Three years after their marriage, their son, Hugo Eric Louis van Lawick, was born. They fondly called their son “Grub.”

Grub’s parents divorced in 1974, when he was around seven. Goodall remained friends with her ex-husband until his death in 2002.

Grub spent his early childhood with his parents in the African wild, before he was sent to England to study.

Growing up in the Wild

Hugo van Lawick filmed 140 hours worth of film on Dr. Goodall, which was then tucked away in Nat Geo’s archives for 60 years. The footage was found in 2014 and pieced together by Brett Morgen to make Jane.

Goodall wasn’t initially interested in making another movie on her often-told story. However, the Jane Goodall Institute persuaded her that it would be good publicity.

The primatologist gets candid about her work and her personal life in the documentary. She talks about falling in love with Hugo van Lawick and being a hands-on mother to her son.

Worried that chimpanzees would harm her young son while they foraged for food, Goodall built a protective cage for his safety.

“That was when he was a very tiny baby,” Goodall explained. “Before he could walk. It was a sort of cage, which we built. But you could stand upright and walk across it. He couldn’t even crawl. So it was almost like a giant cot. And he was never on his own. He was never left even for five minutes without somebody in the room with him. And I never left him one single night until he was 3 years old.”

van Lawick now lives in Dar es Salaam with his family, including his three children, Merlin van Lawick, Angel van Lawick, and Nick van Lawick. He works as a boat builder in Tanzania.

When Hugo Eric Louis van Lawick’s father retired in 1998, he moved into his son’s home in Tanzania, which is on the compound of Dr. Goodall’s old home where her work is based. Like his mother, van Lawick is also an animal rights activist.

In 2010, van Lawick appeared in the biopic, Jane’s Journey. He spoke about growing up as Dr. Goodall’s son and the conflicts he had with his mother, who devoted herself to her research.

van Lawick describes the personal cost of his mother’s “obsession” with her work in Jane’s Journey. But at the end of it, Goodall, Grub, and his children present a happy picture. The mother and son duo help each other out in their wildlife conservation projects.

Dr. Goodall said that her son saw his unique childhood filmed by his dad in the documentary.

“He really enjoyed [the new documentary],” Jane Goodall said. “I was not sure how he would take to it, but he loved it. He said he didn’t feel at all connected to that little baby [shown in the film].”