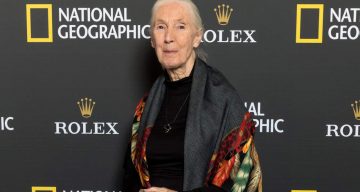 British primatologist Jane Goodall left the comfort of her home in England to pursue her dream of studying chimpanzees in Africa. Her dream was further supported by her second husband, Derek Bryceson. Who was he? We have all the information you need about Jane Goodall’s husband, right here!

Throughout her career, Jane Goodall has been the subject of several movies and documentaries. The most recent one being National Geographic’s documentary, Jane, which aired on March 12, 2018.

The documentary centers around Jane Goodall, the woman famous for dedicating her life to studying chimpanzees. While pursuing a career in the male-dominated field, Goodall became known as the world’s biggest expert on chimpanzees and is still recognized today for her work. She dedicated her life to the animals and completed an over 55-year study of their social and family interactions. While many films and documentaries have been made about Goodall, she was initially a little hesitant about another movie based on her life and how she stepped out of her comfort zone to explore and study the world of chimpanzees.

Goodall went after her dreams and has zero regrets. Her second husband, Derek Bryceson, was very proud of her accomplishments, and he supported her in every way possible. But who is the man behind this incredible woman?

If you are curious to know more about Jane Goodall’s husband, then keep reading our Derek Bryceson wiki for all the details.

Who Was Derek Bryceson?

Derek Bryceson was born on December 30, 1922, in China. He served in the Royal Air Force during the war and then graduated from Trinity College in Cambridge, England, in 1947, with a degree in agriculture.

After completing his studies, Bryceson moved to Tanganyika, Africa, in 1952 because he “wanted to farm, and the opportunities for that were in Tanganyika.”

In 1957, Bryceson was appointed Assistant Minister for Social Services by the colonial government. He was later named Minister for Mines and Commerce in 1959.

During World War II, Bryceson was shot down in his fighter plane over Egypt. His legs were partially paralyzed because of the damage to his nervous system at the base of his spine.

Bryceson was told that he wouldn’t ever be able to walk again, but he didn’t give up hope. With a great deal of determination, Bryceson was no longer confined to his wheelchair and started walking with the help of a cane.

In 1964, Bryceson helped Tanzania win its freedom. He was also a member of Tanzania’s National Assembly, as well as a parks director.

Bryceson divorced his first wife in 1974, and their separation was not an amicable one. His son, Ian Bryceson, who was a marine biologist at that time, used to teach at the University of Dar es Salaam. After Derek Bryceson’s divorce, his son stopped talking to him.

Bryceson and Goodall’s first meeting is a story straight out of the movies.

In 1972, when Goodall became a part of the group for the creation of a national park in Tanzania’s Gombe region, she was a little hesitant to meet Bryceson. People told her that the Tanzanian Parks director was, “mean and unsympathetic.”

However, Bryceson hardly even remembers their first encounter! “But I distinctly recall when Jane came to parliament later to show her film on the chimpanzees. She made a very definite impression,” he explained.

In 1974, Goodall divorced her first husband, Baron Hugo van Lawick. She then walked down the aisle with Bryceson in 1975.

Because of his position, Bryceson was able to safeguard Goodall’s research project.

Bryceson died of cancer in 1980 and his death was a major blow to Goodall.

After Derek Bryceson’s death, Jane Goodall decided not to remarry because she was busy with her life. Instead, she continued to focus on her work.