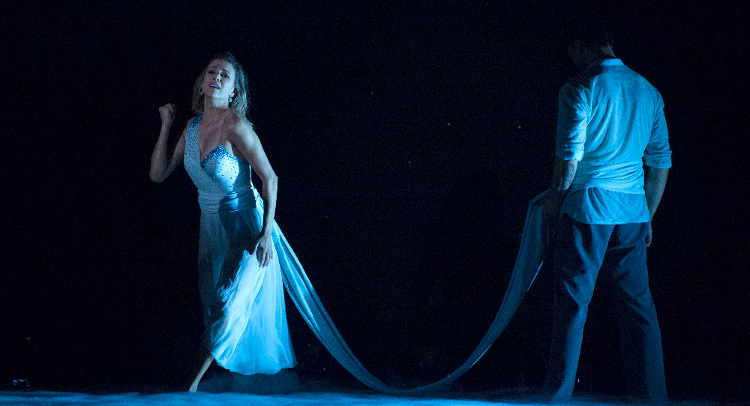 Dancing With the Stars season 23 is almost at its end! The final four couples, who have been preparing to win the coveted Mirrorball trophy, took to the dance floor Monday night. After saying goodbye to Jana Kramer and Gleb Savchenko, three pairs remain, but only one can win!

It’s time to find out who the winner of Dancing With the Stars season 23 will be! After 10 weeks of dancing their hearts out on the ballroom floor, one celebrity and his or her pro-dancer partner will win the Mirrorball trophy. During tonight’s (November 22) finale part one, Jana Kramer, James Hinchcliffe, Calvin Johnson Jr., and Laurie Hernandez took to the dance floor with their professional dancing partners, and yet another dancing pair was eliminated. Who got eliminated from Dancing With the Stars tonight? Who are the three finalists left? Here are the details from tonight’s episode.

Who Went Home and Who is Left?

Olympic Gymnast, Laurie Hernandez and her partner Valentin Chmerkovskiy are the top contenders, but IndyCar racer, James Hinchliffe and professional dancer, Sharna Burgess are close behind on the leaderboard. NFL star, Calvin Johnson Jr. and dance partner, Lindsay Arnold have proved to be better than people’s expectations, despite Jana Kramer and her partner Gleb Savchenko being fan favorites. The pairs performed twice tonight (November 21); a redemption style and a freestyle. Train and Mandy Moore were guest musical performers of the night.

Hernandez did a Paso Doble for her redemption style dance, and followed it with a freestyle with Chmerkovskiy to “Brand New” by Ben Rector. The duo dominated the leaderboard with a high score of 60.

James Hinchcliffe and Sharna Burgess missed out by one point, with a 59. Hinchcliffe did a tango for his redemption style performance, and did a freestyle performance with Burgess to “Beethoven’s 5 Secrets” by The Piano Guys. His freestyle routine was an interpretation of Hinchcliffe’s life threatening racing accident last year.

The Art of Freestyle!  Raw emotion, power and perfection by @Hinchtown and @SharnaBurgess! #DWTS pic.twitter.com/unIpgrpMiE

Jana Kramer was a close third with 58 points after performing a sizzling tango, and dancing with Gleb Savchenko to Sia’s “Unstoppable.” Calvin Johnson Jr. and his partner Lindsay Arnold performed  performing a smooth Viennese Waltz and danced to a medley of “Please Mr. Postman”/”I Want You Back” by The Marvelettes and the Jackson 5. The couple earned a total of 56 points.

Many fans will be sad to know that Kramer and Savchenko were eliminated at the end of tonight’s (November 21) finale. It comes as a shock, since Kramer has such a big fan following. Laurie Hernandez, James Hinchcliffe, and Calvin Johnson Jr. are the top three finalists of Dancing With the Stars season 23. They will take to the ballroom one final time tomorrow night (November 22) and one of them will be crowned winner of season 23!

The season finale will take place at The Grove. We’ll get to see all 13 couples hit the stage once more, with Vanilla Ice performing his classic hit “Ice Ice Baby.”

Votes from Monday night will be combined with the judges scores and someone out of the final three will take the Mirrorball trophy! Don’t miss the season finale of Dancing With the Stars tomorrow night (November 22) at 9:00 p.m. EST only on ABC.