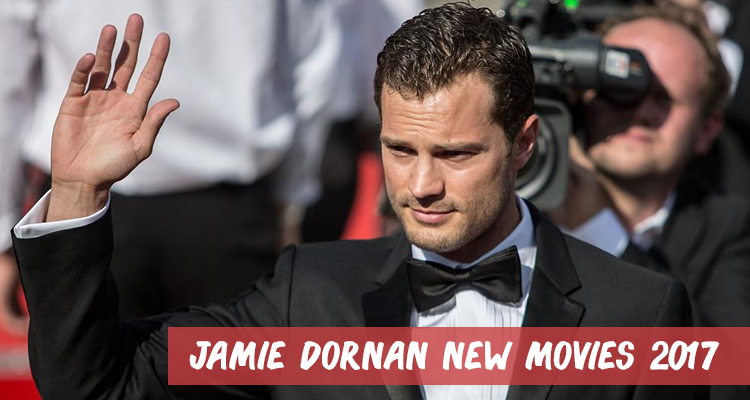 Rising star, Jamie Dornan will be bidding farewell to the character that shot him to fame. Dornan, who had previously played a handful of roles in short films before finding fame as the Belfast Strangler, Paul Spector in the BBC thriller The Fall, has now cemented his status in Hollywood as Christian Grey, the business magnate from Fifty Shades of Grey. Though Dornan has taken his final bow as Paul Spector, it doesn’t mean we’ll be seeing less of him. Besides the new Fifty Shades sequel, Dornan is busy filming for more movies that will be releasing soon. Here are the new movies starring Jamie Dornan that will be releasing in 2017.

Fifty Shades Gets Darker in This Upcoming Sequel

It’s already February! Which means fans will get to see the movie they have been waiting two years for. Fifty Shades Darker, the sequel to the 2015 box office hit Fifty Shades of Grey based on the novels of the same name by E.L. James, will hit theaters on February 10.

As the second book in E.L. James’ trilogy, Fifty Shades Darker will pick up from where the last movie left off, as Christian and Anastasia part ways. They reconcile, and try to make their unconventional relationship work, but things aren’t easy when Ana’s boss, Jack Hyde, and Christian’s older ex, Elena, get involved. The red room of pain is back, while Christian tries to control his inner demons, and Ana tires to deal with his past lovers.

In a collaboration that is the stuff of dreams, Taylor Swift and Zayn Malik have recorded the title track for the Fifty Shades Darker official soundtrack. The song “I Don’t Wanna Live Forever” is currently available for streaming online, and will officially be released with the film’s soundtrack. The full soundtrack includes a variety of artists including Halsey, John Legend, Nick Jonas, and Nicki Minaj. The teaser of Swift and Malik’s song, as well as the steamy trailer, promise that the second of Fifty Shades movies is certainly a lot Darker and sexier.

The 34-year-old is a far cry from his character on The Fall and Christian Grey, and he’s ready to move on to playing different roles. In an interview, he spoke about focusing on his future projects.

“We have done two movies back to back now, and I’m actually finished with it. I move on very fast in my mind.” Dornan said about setting aside Grey’s handcuffs, “As much as from the outside people think you are synonymous with one character, but I’m very much like, ‘Right, that’s done’ and move on to the next project and worry about that character.”

His next project takes on comedy and drama in the new independent film, Untogether. Dornan stars a successful writer who falls in love a former child prodigy played by Jemima Kirke. Kirke’s character is a heroin-addict who has turned over a new leaf. After becoming sober, she returns to writing and hopes to regain her erstwhile success.

Kirke’s sister, Lola Kirke, will play be her younger sister in the movie It’s the first time the Kirke sisters are appearing on-screen together. Lola’s character has her own love troubles when she falls for an older and charismatic man, despite having an older boyfriend played by Ben Mendelsohn.

Untogether is directed by and adapted from the screenplay written by Emma Forrest and will be her feature film debut. The movie is currently in post-production and is expected to release at the Toronto International Film Festival.

Jamie Dornan is certainly looking to diversify his credits. His head is now shaved, and he has gone for a more rugged look to prepare for his role as the youngest member of the band of Merry Men in Robin Hood.

The latest in the big-screen retelling of the Prince of Thieves will star Taron Egerton from Kingsman: The Secret Service as Robin Hood while Jamie Foxx will play his right-hand man, Little John. Dornan is Will Scarlett, the youngest of the Merry Men known for his mastery in sword fighting. His costar from Untogether, Ben Mendelsohn, will has also been cast in the movie.

Robin Hood will be one of four movies about the lovable outlaw releasing around the same time next year. Taron Egerton and Jamie Foxx have differentiated their Leonardo DiCaprio-produced film from the rest, saying that it’s a darker and grittier take on the Merry Men. Well, Dornan is no stranger to dark and gritty!

Robin Hood is currently in production, and the release date has been delayed until next year due to delays in filming.