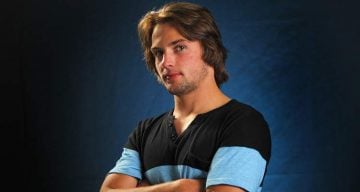 Jamie Anderson snowboarded to back-to-back gold medals, but it’s no surprise with this Olympic veteran. Anderson’s beau, Tyler Nicholson is a fellow snowboarder who made his Olympic debut at Pyeongchang. Even though they’re on rival teams, they don’t shy away from showing their support for each other. Get the scoop on the hottest couple in snowboarding in Tyler Nicholson’s wiki.

Tyler Nicholson, fondly called Patches, was born on August 3, 1995 in North Bay, Ontario in Canada. According to the official Olympic website of Team Canada, he got into snowboarding at the young age of seven.

He got his first board for Christmas that year and that was the start of his sporting career. Back in North Bay, there was plenty of snow and slopes. He took to the rails like a natural and was soon competing in contests.

When he’s not competing, he’s snowboard filming or driving around a snowmobile. His snowboard movies are featured on the sports website, Shredbots.

Outside of snowboarding, he enjoys motocross, wakeboarding, surfing, and camping. He’s even a certified wakeboard instructor.

He’s attending flight school and working towards obtaining his pilot’s license. Nicholson is literally aiming for the skies!

At 14, Nicholson won the bronze at the 2010 Ontario Winter Games. Since then, he gained visibility in the sporting world and his Olympic dreams got a push. He continued to compete, winning gold at the 2013 FIS Junior World Championships.

He made his Winter X Games debut in 2015. That same year, he finished second in the big air event at his first FIS World Cup. His winning streak continued the next year when he finished first in men’s slopestyle at the World Snowboard Tour.

He was named in the top five  athletes both the slopestyle and big air Olympic test events at the Pyeongchang 2018 venues.

At the start of 2017, he earned his third career World Cup podium finish at the Laax Open. He placed third behind teammates Max Parrot and Mark McMorris in slopestyle sweep. A few days later, he won a silver medal at the Winter X Games in Aspen.

Eye on the Prize

Nicholson joined the Canadian snowboarding team and aimed for the Sochi Olympics in Russia in 2014. But he failed to qualify that year. He started the 2017 season strong and was a contender for Team Canada at the Olympics.

But his 2017 season was cut short by an ACL injury. The injury nearly derailed his 2018 Olympic aspirations. There was little hope if he could get in shape before the Olympics.

Rosemary Nicholson, his mother said, “He overcame a lot of obstacles with that working hard to build up the strength in that left leg with the ACL tear and he also overcame a lot of adversity with people telling him, and people of authority, that you are never going to see the Olympics.”

Just before his Olympic debut in the men’s slopestyle, Rosemary recalled, “But his surgeon told him the day of the surgery, all the nurses and doctors were around the OR table and they said, ‘Tyler, we are going to do the best we can with this surgery and then you take it from there, and we are all going to be cheering you on at the 2018 Olympics,’ and after that he was sedated.”

After recovering from his injured knee, the 22-year-old was back on the board at the Dew Tour slopestyle event in December 2017. His 2018 Winter Olympics dream was back on and he will be competing alongside his girlfriend.

Out of the Friendzone

Jamie Anderson and Tyler Nicholson are one adorable couple in their Instagram posts. Never mind that they are on rival teams! They give each other shoutouts on social media and gush about each other’s achievements.

It’s not known how they met (though we presume they ran into each other at some snowboarding event). But they’ve been together for more than five years.

Going by an Instagram post, Anderson shared in December 2017, they started as friends five years ago. They’ve been dating for three out of those five years.

While he’s gushing about his girlfriend’s second Olympic gold, Nicholson made it to the men’s slopestyle finals. He was one of all four Canadians in the finals.

However, he lost to Anderson’s teammate, Red Gerard who took gold. Tyler finished seventh overall. Nicholson’s teammates, Max Parrot and Mark McMorris nabbed the silver and bronze respectively, the first medals for Canada at the 2018 Olympics.