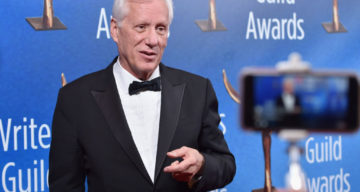 Actor James Woods, 66, arrived at the New York premiere for his new movie, White House Down, wearing more than just a suit and a smile—he had a young lady on his arm too. The younger woman was 20-year-old Kristen Bauguess, Woods’ new girlfriend. Although it raised some eyebrows, Woods had no problem walking the red carpet with his sugar baby. They even donned color-coordinated outfits.

Woods probably didn’t mind the extra attention because dating a younger woman really isn’t anything new for him. It’s only been a couple of months since he broke up with his last girlfriend, Ashley Madison, after seven years together. She was the daughter of one of his golfing buddies, and when they first started dating officially, he was 59 and she was only 19. The media gave her a lot of a slack, positioning her as a gold digging sugar baby who was just using him to get ahead. Woods always defended their age difference, her character, and their relationship.

Bauguess has already been subjected to the same media scrutiny, especially since just a few weeks earlier, she was arrested on two felony charges—possession of marijuana and possession of a controlled substance—as well as three misdemeanor charges: speeding, driving an unregistered vehicle, and switching license plates.

What do you think: Is Kristen Bauguess just using James Woods to get out of a sticky situation, or could this actually be the start of a serious relationship?