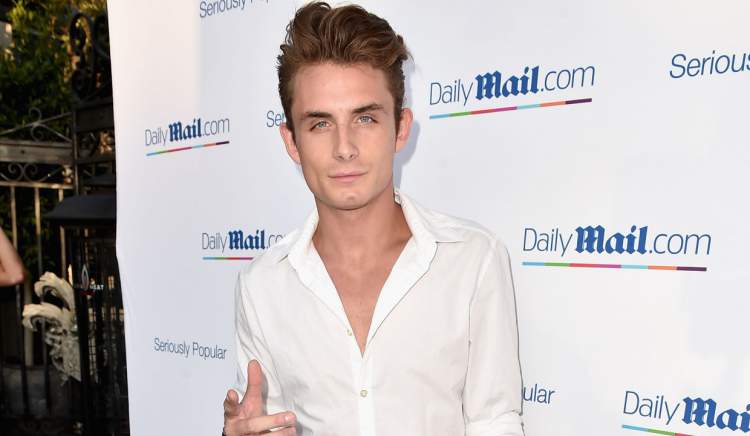 Vanderpump Rules fans know nothing good can come out of putting James Kennedy and Lala Kent in one room. The two exes had a heated exchange when James got jealous over Lala’s latest relationship. But this tense dynamic is to be expected with James Kennedy. Get the lowdown on SUR’s troublemaker here.

His Father Is Famous

The cast of Vanderpump Rules is not your typical reality TV celebs. They have perfectly normal jobs in Real Housewife, Lisa Vanderpump’s restaurant, SUR and they also get paid to be on TV.

But it appears that James Kennedy is fine without working in Lisa’s restaurant. In 2015, he revealed that his dad is Andros Georgiou. Sound familiar?

George Michael fans would recognize the longtime associate of the late musician. Georgiou managed Michael for most of his career, both with WHAM! and as a solo artist. He was even managing director of Michael’s label, Aegean Records.

Georgiou also founded Hardback Records, and the family has lived in London, Spain, and California.

Kennedy has been candid about his family on the show, including about his parents’ divorce. His mother, Jacqueline also appeared the Bravo show.

Though he’s known to be quite the drama-stirrer, Kennedy has a softer side when it comes to his younger brothers, Harry and Dylan.

George Michael Was His Godfather

When James was growing up, George Michael was a big part of his family. The singer and James’ dad were so close, Andros made Michael James’ godfather.

“When I married Jackie, I told her, ‘[George] comes first. My kids are his kids and he’ll be in the delivery room with us’ and he was,” said Andros, “When my son James was born in January 1992, Yog and I gave him his first bath.”

Michael and Georgiou’s famous friendship came to an end years ago. Their relationship was reportedly strained since Michael’s 1998 arrest. A falling out over Michael’s close friend, Geri Halliwell ended with these two parting ways.

Though they were estranged, Georgiou still talks fondly about the late musician. Even James refers to his dad and Michael as cousins.

He Owes His Job to His Parents

James is following his father and godfather’s footsteps into music as a DJ. He works as a busboy at SUR and a DJ at PUMP. And. he’s on TV! It’s obvious he makes enough at least to maintain his beloved baby, a snazzy BMW.

There’s no information if his wealthy father supports him in any way, but his parents did give his music and reality TV career a boost. How? To put it shortly, Lisa Vanderpump is pretty chummy with his parents.

It was revealed on the show that Lisa and James’ parents go way back. In fact, she hired him as a favor to them. He still had to work his way up like the other employees at SUR.

The 26-year-old earned Lisa’s husband, Ken Todd as his manager. He’s even close to SUR matriarch’s son, Max. In one interview, James mentioned that he’s collaborating with Max for one of his albums.

However, James’ drinking and explosive temper have invited Lisa’s chagrin on more than one occasion. In the latest season, James is working on getting back into Lisa’s good graces.

James is currently dating Raquel Leviss, a Sonoma State University graduate in kinesiology. The pageant girl was crowned Miss Sonoma County in 2016 and was aspiring for Miss California.

Not a single day goes by without working toward my dream of being the next Miss California USA. The first preliminary competition is less than a month away! As I compete for the title of Miss Santa Monica, I know I have so many generous supporters who have believed in me for many years. I owe everything to the people who make it possible to compete in the USA system. Not many people know what goes into pageantry or why pageant girls compete, but I can tell you that the girls I have met have been some of the most aspirational women who set goals for themselves and contribute to bettering their communities. I'm so grateful for these opportunities to meet amazing people and share what I stand for. Hopefully, you will see me strive for my dreams representing the beautiful city of Santa Monica!

She’s not part of the SUR crowd but hangs out with the crew often. Raquel is a great girl who has warmed her way to fans’ hearts. But sadly, James has unresolved feelings for Lala Kent.

James and Lala admitted they had a relationship in the past. She was his closest friend in SUR. But his drunken-brawl tendencies have alienated Lala and his friends.

Lala, in turn, tells Raquel to rein in her man and get him to stop talking flack about Emmett. Raquel is obviously seething at James making his jealousy so obvious. But there’s nothing his girlfriend can really do.

And the James-Lala debacle is far from over.