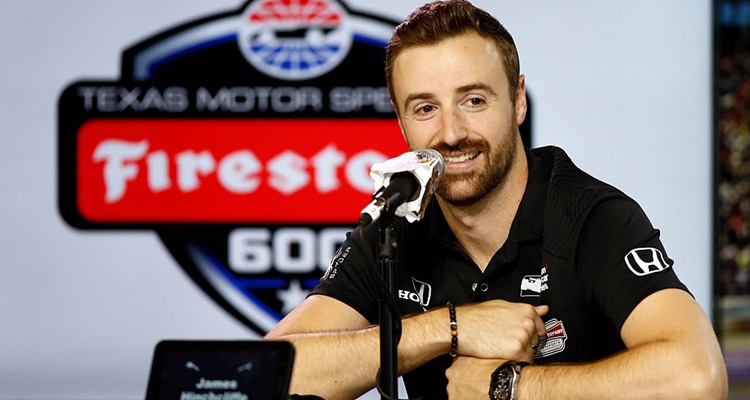 IndyCar racer and Dancing With The Stars contestant, James Hinchcliffe is showing off his dancing skills every chance he gets. Here’s everything you need to know about him.

James Hinchcliffe is not only one the top scorers on Dancing With The Stars, he’s also showing off his dancing skills outside the ballroom. On Monday’s episode of The Ellen DeGeneres Show, Hinchcliffe and pro-dance partner, Sharna Burgess wowed the audience with their upbeat jitterbug routine. The race car driver has everyone asking “who is James from Dancing With The Stars?” and want to know more about him, especially after his marvelous recovery from a near-fatal accident last year. Here’s James Hinchcliffe’s wiki, including facts about his family, girlfriend, and net worth.

1) He Signed a Multi-Year Contract with Schmidt-Peterson Motorsports

Hinchcliffe had started out in many racing teams before making his IndyCar debut with Newman/Haas Racing in 2011. When Newman/Haas stopped competing in Indycar due to financial reasons, Hinchcliffe was a free agent. He signed with Andretti Autosport and competed for them in 2012 and 2014. At the 2014 Indianapolis Grand Prix, Hinchcliffe had a piece of his suspension break, and pierce his leg during a crash. A CT Scan revealed he suffered a concussion, but he returned to racing soon after.

Later that same year, it was announced that Hinchcliffe signed a multi-year contract with Schmidt-Peterson, an up-and-coming team. This contract that ensured him an annual salary of over $11.0 million, and brought his net worth to $2.8 million. Hinchcliffe won his first race in 2014 with the team.

2) His Parents Are Racing Enthusiasts

His father Jeremy Hinchcliffe is a former amateur racer. When he started racing, the team had no mechanics. Both father and son worked together on the cars James Hinchcliffe raced. This helped him gain an appreciation for skilled trades and, with his father’s encouragement, he studied professional engineering.

Hinchcliffe also has a brother, Christopher, and a sister, Rebecca, who supported him throughout his career.

Hinchcliffe might not have a wife, but he most definitely has a girlfriend. Rebecca “Becky” Dalton is an actress who hails from Oakville, Ontario, Canada —Hinchcliffe’s hometown. Dalton has had limited success on screen, but is very active on social media. She is Hinchcliffe’s cheerleader, supporting him as he takes the stage in DWTS.

@hinchtown is on @theellenshow today at 3pm!! Also tune into #DWTS tonight and vote #teamstopandgo on Facebook or at http://dwtsvote.abc.go.com. Wish I could be there ❤️

4) He Made a Big Comeback since His Near-Fatal Accident

In May 2015, Hinchcliffe was severely injured in a car crash while racing in the Indianapolis 500. He was hospitalized, and Ryan Briscoe and Conor Daly filled in for the remainder of the race.

A piece of suspension had impaled him through the car and the safety crew rescued and rushed him to a hospital. The timely medical help, multiple surgeries, rehabilitation, and having no memory of the accident helped Hinchcliffe recover sooner than expected.

Hinchcliffe was back to racing in May 2016. He competed on the same track where he won the Pole position for the 100th running of the Indianapolis 500.

5) He Has Beer Named after Him

Hinchcliffe is the self-proclaimed “mayor of Hinchtown” on social media, where he is very active. In March of this year, before he competed in the Indianapolis 500, Hinchcliffe unveiled a new microbrew named after him, the picture of which he posted on his Instagram.

Flat 12 Bierwerks produces Hinchtown Hammer Down which was launched in 2012. In March, the brewery launched The Brick. Hinchcliffe had taken to the production line to help create the new micro-brew.

Watch James Hinchcliffe dance with Sharna Burgess on Dancing With The Stars every Monday at 8:00 p.m. EST on ABC.