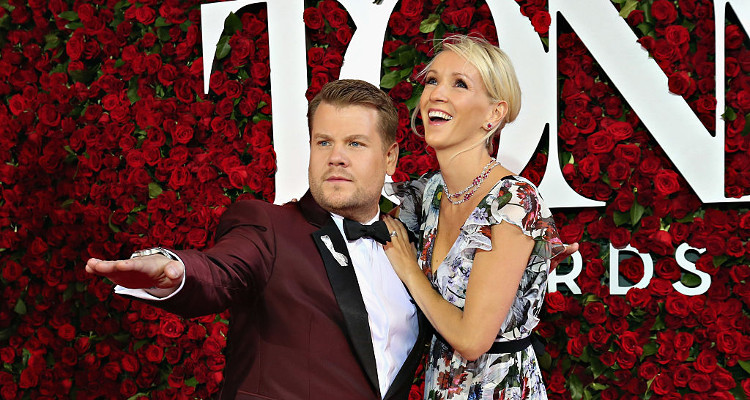 James Corden has been very successful after moving to the United States to host his own show. But, he couldn’t have made the move from England if not for his supportive wife, Julia Carey. While he is busy with the show, Carey makes sure that their two children, their home and, by Corden’s own admission, himself are all in check!

Julia Carey and James Corden make such a lovely couple! He is an actor, comedian, singer, and television host of The Late Late Show with James Corden on CBS. James Corden’s wife is also an actress, who has appeared in the shows A Bunch of Fives and Wings. Their relationship is definitely one for the books, as the TV host has nothing but love and admiration for his wife. In fact, Corden says that it was “love at first sight” when he met Carey! Here are some more details about her in our Julia Carey wiki.

Coming to the United States

Corden was in awe of Julia Carey when he first met the television producer, and praised her for letting their entire family uproot their lives to Los Angeles when he got his hosting gig. “She’s incredible. People always talk about me and how much work the show must be, but it’s nothing compared to what she does. Our daughter was only 12 weeks old when we moved here. I had to come out earlier because the baby didn’t have a passport,” Corden said. The couple met through her friend, Preacher star Dominic Cooper, who introduced them in 2009. Corden proposed to Carey on Christmas Day 2010, and they walked down the aisle on September 15, 2012. The ceremony took place at the lavish Somerset Babington House.

There were several famous faces at their wedding, including singer Natalie Imbruglia, David Williams, Jimmy Carr, and Matt Smith. Snow Patrol frontman, Gary Lightbody serenaded the couple on their special day. Carey and Cordon have two children together. Their son Max was born on March 22, 2011, and their second child, a daughter named Carey, was born on October 27, 2014. The family had spent a good portion of Max’s early childhood in England, but packed their bags and headed to the United States after Corden was named the new host of The Late Late Show.

Corden credits his wife for the success he had in his career, and is thankful that she agreed to move to the U.S. “It was a massive thing to just pick up our life and come here, you know. And we’re happy because we’re together all of the time. It’s not like I’m doing a movie where I’ll be back in a few months or a play with eight shows a week where every night you’re on your own. Predominantly, this show is me being here, in this office, coming up with ideas, and then we go and shoot stuff and do the show. Home every night.” Julia Carey is known for her tremendous amount of charity work in both England and the U.S.

Both James Corden and Julia Carey plan on staying in the U.S. and continue to raise their family. Corden told The Sunday Times, “We’re here for another few years without question unless I get fired. We’ve just bought a house, and we feel settled as a family… She’s got an amazing job looking after two and a half children – me being the half.” While Corden continues to fly high in his career, it’s Carey who is the proverbial wind beneath his wings.