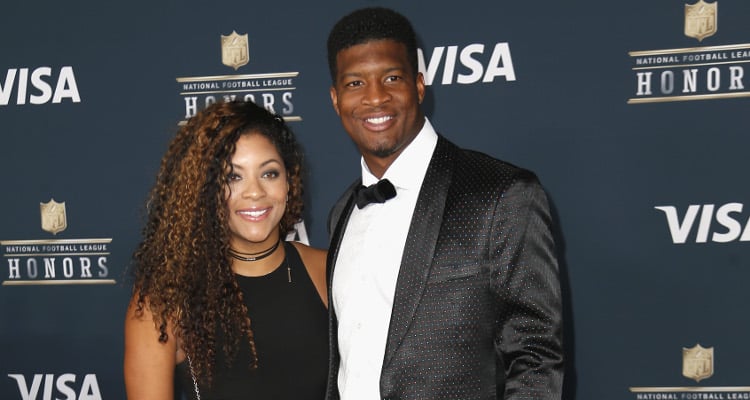 Jameis Winston is a quarterback for the Tampa Bay Buccaneers in the NFL. A lot is known about the football player’s professional life, but how much do we know about his personal life? Does he have a girlfriend? If you are wondering who Jameis Winston is dating, then keep reading as we spill some details about Jameis Winston’s girlfriend.

We learned a lot on last night’s episode of Hard Knocks, like how Jameis Winston amped up DeShone Kizer. After their preseason game Saturday night, Winston told Kizer in a pep talk, “Hey, patience is the easiest way. All right? Take my word for it because I’m a risk-taker. Have patience. Who you got? You got coach [Hue] Jackson. So listen to him. Let him guide you. But patience is the easiest way. Taking that ball down, even though you got that cannon. Listen to me, because they ain’t going to tell you that. You’re spoiled You’re blessed. Do your thing.”

We also got to see Winston playing Pop-A-Shot against his girlfriend, Breion Allen. Keep reading if you want to know more about the beauty who is Jameis Winston’s girlfriend.

Who is Jameis Winston’s Girlfriend?

Born on March 14, 1994, Breion Allen’s age is 23. Her parents are Frederic and Taura Allen and she has a brother. Standing tall at 5’9”, Allen has three cousins who are football and basketball players. One cousin, Sam Shade, played football for Alabama and the Washington Redskins. Another cousin, Sean Jackson, played football for Florida State and the former Houston Oilers. She also has a cousin named Jasmine Lee who played basketball for Memphis.

Blurry but it’s only our business #BreeziBoo

Allen graduated from Hoover High School in 2012. She was a three-year letter-winner and two-year starter for coach Donnie Quinn. As a senior, she averaged 11.0 points per game with 58 three-pointers. She was Birmingham Tip-Off Player of the Week and was rated the second-best guard in Alabama by Bama Prep Girls.

In 2013-14, when she was a sophomore at Rice University, Allen played a total of 26 games, averaging 2.3 points and 0.5 rebounds in 8.2 minutes per game. She graduated in 2016, after completing a three-month internship from CSN Houston. At CSN, she shadowed Howard Chen at an Astros game, analyzed NBA Summer League highlights, and did voice overs with producers and reporters.

After graduating, Allen started carving a path for herself in real estate. She began working at Berkshire Hathaway HomeServices in November 2016, and has it listed as her current job.

When talking about how they met, Allen revealed that two went to the same high school. Apparently, Winston walked up to her and started talking while she was watching a basketball game. According to Winston, “I came up to her, and I was like ‘You’re pretty!’” to which Allen cut in saying, “That’s not what he said … Do you see how much he’s talking? I was trying to watch a basketball game.” Even their banter is adorable!