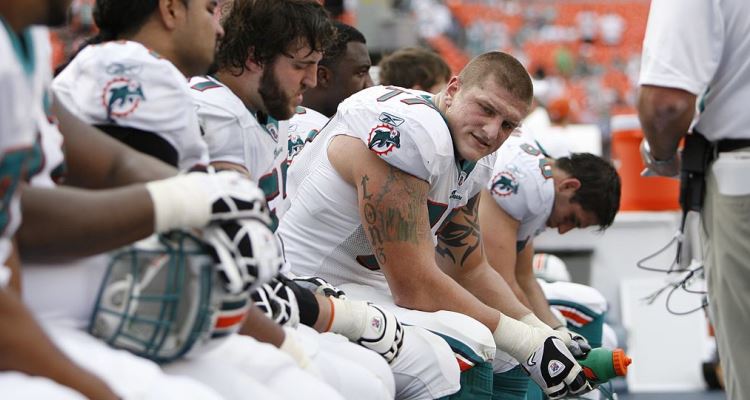 After nine seasons, Minnesota Vikings star, Jake Long, 31, (soon to be 32 in May) is retiring from football, according to his latest post via Twitter! Now that Jake Long’s NFL career is ending, fans are looking through his career stats, personal life, and contract deals to get all the information they can on him. Well, there’s need to search all over the Internet, we’ve got everything you need to know right here in our Jake Long wiki!

Jake Edward Long was born on May 9, 1985 in Lapeer, Michigan. Jake Long’s college years were spent at the University of Michigan on an athletic scholarship.

On March 10, 2012, Jake married his college sweetheart, Jacqueline Laurian. They have a daughter named Juliette and one more on the way!

According to The Richest, Long’s net worth is $54.0 million and his salary has varied from team to team. He has played for the Miami Dolphins, the Atlanta Falcons, and the St. Louis Rams. Football has always been Long’s top priority, along with his family, and despite his injuries, including a torn ACL, he has always given the game his best.

Why is Jake Long Retiring?

On Monday, Long took to Twitter to post a statement about his upcoming retirement from the NFL.

“Football has been something that I have put my entire heart and soul into. I have always given this game the respect and attention to detail that it demands. As I continue with my recent rehab I realize that although my heart and mind still want to play, my body is telling me something completely different. Mentally and physically I have given this game everything I possibly could. I love playing and will definitely miss it.”

He added: “But, I am also excited for the next chapter in my life and the opportunities that will come. I have an amazing wife, a little daughter and another one on the way. Life is good!”

According to the NFL’s website, Long recently posted a story about attending the NFL Business Academy back at his alma mater, the University of Michigan.

“Right now, it’s just really getting healthy,” said Long before his announcement. He played four games last season with the Minnesota Vikings, his third team since leaving Miami after the 2012 season.

Long said the NFL Business Academy taught him two valuable lessons that were important to following a career in football.

“And believe in yourself, because in business — and starting your own business or whatever it is — there’s going to be ups and downs. There’s going to be failures. You’ve got to learn from those. You’ve got to know what you can bring to the table and really believe in yourself. And every single person has said that, so that’s really resonated with me.”

The Vikings may never be the same without Long, but at least fans know that he’s not to far from the life he’s leaving behind.