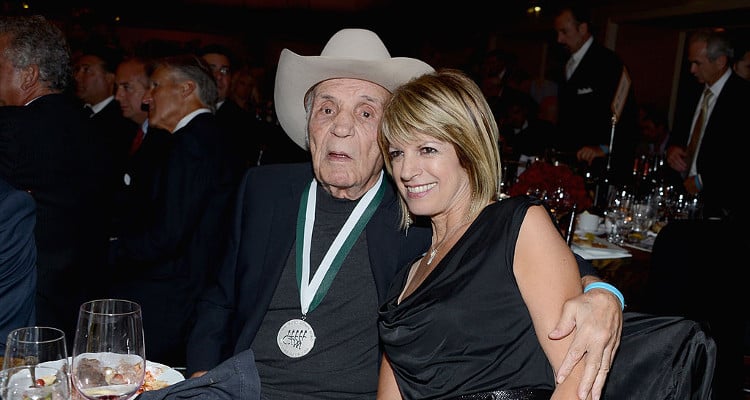 Though Denise Baker met legendary boxer Jake LaMotta rather late in life, they were practically inseparable from the very first time they saw each other. She was his fiancée for several years before they got married in a simple ceremony in 2013. Baker took care of LaMotta as he grew older, and is heartbroken at the passing of a man who gave her so much happiness.

Legendary boxer Jake LaMotta passed away on Tuesday, September 19, 2017, at the age of 95. Jake LaMotta’s death was due to complications from pneumonia, and he passed away in a Florida nursing home. The professional boxer, former World Middleweight Champion, and stand-up comedian was nicknamed “The Raging Bull,” and was a rough fighter who would subject his opponents to vicious beatings in the ring. LaMotta was also a man who, in his constant search for elusive love, married seven times and fathered four children. Jake LaMotta’s wife at the time of his death was Denise Baker, who is almost 30 years his junior. Jake LaMotta and Denise Baker got married on January 4, 2013, with a simple ceremony, followed by a larger party shortly after.

According to her Facebook page, Baker is a native of Brooklyn, New York, where she attended high school at Fontbonne Hall Academy. She later enrolled at Cochise College in Arizona. According to sources, Denise Baker’s age was 62 when she married LaMotta almost five years ago. She was engaged to the boxer for almost 12 years before the couple tied the knot at a justice of the peace in Bisbee, Arizona. At the time, Baker joked to Page Six that they would probably “take a nap” after the ceremony. The couple had a big party two days later where a new film about LaMotta’s life, The Bronx Bull, was shown. Though initially said to be its sequel, the film has no affiliation to the Robert De Niro classic, Raging Bull which was released in 1980.

A Bad Turn on Broadway

Baker was also a writer and director who starred in an off-off-Broadway show with LaMotta, Lady and the Champ. Though she put her heart into making the musical, most critics tore it apart. Baker’s singing came under heavy criticism, especially from The New York Times, who referred to her renditions of “New York, New York” and “Can’t Help Falling in Love” saying, “Baker is the kind of singer who apologizes mid-song as her voice cracks for the first of several times.”

In 1993, LaMotta met Baker in Midtown Manhattan at PJ Clarke’s restaurant. There is little information about Denise Baker’s children, but we do know that she was a divorced mother of two when she met the boxer. Her two daughters are named Meggen Connolley, and Natalia Baker and they were mentioned in LaMotta’s obituary. Baker is distraught having lost the man she was with for nearly 25 years. In her moment of grief, our thoughts and prayers go to Denise Baker, and Jake LaMotta’s family.