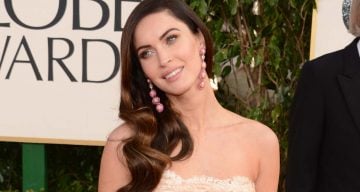 Could this be…a possible hookup between Megan Fox and Damon Wayans, Jr.? Well, OK! Magazine thinks so. They initially reported that the two met on the set of the series New Girl. Fox was making a guest appearance and though Damon is no longer on the show, he is said to be a frequent visitor on set.

According to the rumors, it was both of their kids that initially connected the two. Wayans has two girls and Fox has two boys, both with their respective exes Aja Metoyer and Brian Austin Green. The Happy Endings star is said to have brought muffins and juice to Fox’s trailer every morning and they spent all of Fox’s down time on set together.

Sounds juicy, but several other media outlets are refuting the story. According to the Gossip Cop web site, for instance, Megan Fox and Damon Wayans, Jr. have never even met! However, that’s not stopping fellow New Girl actor Jake Johnson from weighing in on the dating rumors. The actor shared an Instagram picture of the OK! magazine article, along with the caption, “Well, well, well. @mrdamon2 if you bring any bitch muffins & juice for breakfast then it better be me!” All in good fun, of course.

It seems this rumor is still up in the air. You can be sure the paparazzi will be paying close attention to every move both of these stars make.