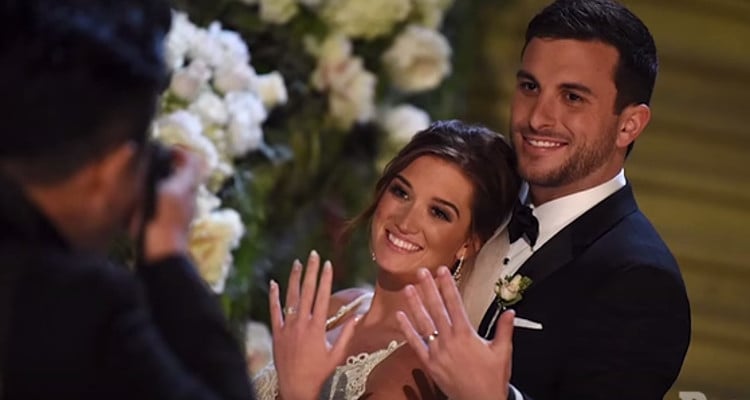 The Bachelor alums, Jade Roper and Tanner Tolbert will be celebrating their first wedding anniversary later this month, but given the short shelf life of reality TV relationships, curious Janner fans are wondering whether Jade and Tanner are still together or heading towards divorce.

There’s a reason why happily ever afters exist only in fairy tales and Disney cartoons. Relationships in the real world are full of unexpected twists and turns, as couples struggle to stay together and work through their problems. Sure, reality shows like ABC’s hit matchmaking franchise, The Bachelor may help in bringing couples together, but what happens behind the scenes once the cameras are turned off? Last year, Jade and Tanner left their teary-eyed fans grasping for tissues when they got married in a televised two-hour special celebrating 20 seasons of The Bachelor. However, things haven’t been smooth-sailing for the 30-year-olds who have faced the added pressure of trying to enjoy their time as newlyweds, and lead a normal married life under the spotlight. As the attractive couple inches closer to its one-year wedding anniversary, here is everything you need to know about whether Jade and Tanner are still together or on the verge of getting a divorce.

If you’re wondering who Jade and Tanner are, it’s quite natural because it’s pretty hard to keep up with all the new couples that emerge from The Bachelor franchise every year. Let’s take a quick trip down memory lane back to when Jade Roper and Tanner Tolbert fell in love, became engaged and subsequently got married on The Bachelor. A native of Nebraska, Jade Roper is a 30-year-old ex-contestant from season 19 of The Bachelor which featured the studly farm boy, Chris Soules. After her elimination from the show, she went on to compete on season 2 of The Bachelor in Paradise, where she met and fell head over heels in love with her future husband, Tanner Tolbert. Seemingly shy at first sight, the small-town girl made it to the final four on Soules’ season, and came as a surprise package when she revealed that she had posed nude for Playboy magazine!

Meanwhile, the 29-year-old Tanner is a Kansas City boy with a degree in sports management from the University of Kansas. Currently working at Legends Honda as a finance manager, he also assists in training the KU football team. The handsome reality star competed for Kaitlyn Bristowe’s affections on season 11 of The Bachelorette, but was eliminated halfway through the season. Well, the second time was a charm for the fan favorite, because he went on to participate in Bachelor in Paradise, where the gorgeous Jade nursed his broken heart back to life. To cut a long story short, the lovebirds quickly realized that they were meant to be together, got engaged on the season finale, and had a lavish wedding last year.

Sometimes he can be the biggest pain in my neck; but, when he's good, he's incomparable. 😂😍😘@tanner.tolbert #imapaininthenecktoo #marriedlifeourway #jannerforever

Jade and Tanner’s wedding was definitely one for the books, as the good-looking couple recited their vows surrounded by all their Bachelor and Bachelorette friends. The ceremony was officiated by The Bachelor host Chris Harrison, who exclaimed that Jade and Tanner’s wedding was the “single largest gathering of Bachelor alumni in history.” After the wedding festivities, that continued into the wee hours of the morning, an emotional Tanner confessed, “I was just trying not to cry. It was such a crazy rush of emotions.” He was full of praise for his glowing bride Jade gushing, “Jade is the woman I always envisioned. She makes every day more fun,” while she chimed in, echoing his sentiments, “It’s crazy how marriage does change everything. We’re a family now. And it feels like everything is complete.” Awww, isn’t that the most romantic thing you’ve ever heard?

Wishing you all a Merry Christmas and joy to you and your families (whatever shape or form they may take)! 🐾❤️ Also, happy 11th months married, babe! 😘😘

After a year of their whirlwind romance, the happily married couple continues to be deeply in love, and we’re pleased to report that there’s no trouble in paradise yet! While in the throes of marital bliss, the couple decided to participate in season 8 of WE TV’s reality show Marriage Boot Camp: Reality Stars to work on their relationship, which felt slightly rushed due to their stint on Bachelor in Paradise. Although at times, Jade and Tanner have debated whether to stay married or not, the couple has thankfully opted to work through their differences. As they kissed on the show, Tanner said, “I want to have a marriage that is beautiful in every way,” with the exciting revelation that “they are thinking about expanding their family.” In the world of reality TV, where relationships struggle to make it past the duration of the show’s season, such true love surely gives future contestants of The Bachelor and The Bachelorette hope, that they too can have a happily ever after. Here’s wishing Jade and Tanner Tolbert a very happy wedding anniversary as they celebrate a year of togetherness on January 24!

When you want to plant a kiss on him… but he's just over here being an Instagram model and whatnot. 😂😂😂 #lovemyhubby #hesthebest @tanner.tolbert