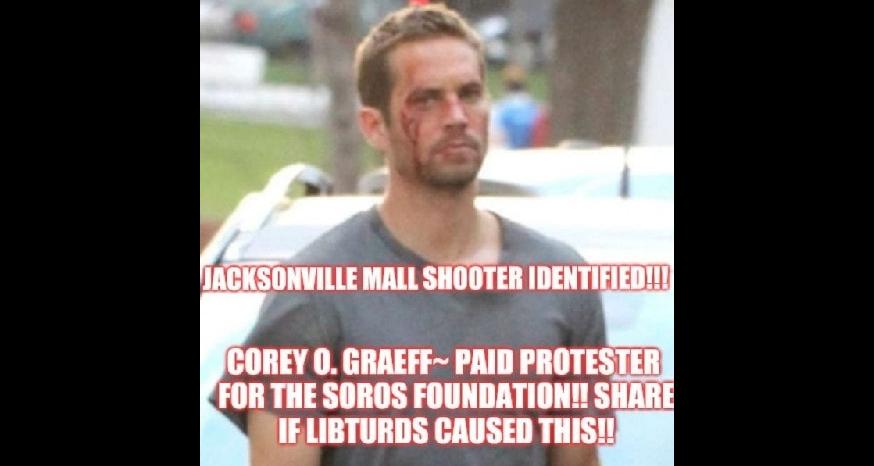 Corey O. Graeff is the shooter identified in the Jacksonville mall shooting on Sunday, August 26.

Jacksonville, Florida was rocked by a shooting at a mall on August 26. According to latest reports, a gunman opened fire at an eSports tournament, killing two people and injuring 11 others. The gunman reportedly died of a self-inflicted gunshot. Now, people are curious to know about the shooter’s identity and motive. One Facebook post claims the shooter was identified as Corey O. Graeff, a person with supposedly dubious connections. But we’re calling out this hoax right here.

Who Is the Jacksonville Mall Shooter?

A Facebook post by America’s Last Line of Defense claims that the Jacksonville mall assailant is a man named Corey O. Graeff. The supposed shooter was allegedly a paid protester for George Soros’ foundation.

The post, which was captioned: “HE WAS STOPPED BY A GOOD GUY WITH A GUN!,” was shared over 1.8K times since it was posted late Sunday night. However, there are a lot of things wrong with this post.

Firstly, America’s Last Line of Defense is a heavily satirical site. It contains a disclaimer which states that nothing on the page is real, and it is meant to be a diversion from the real events on the news. Most of its posts are designed to bait Trump fanatics into believing untrue facts and sharing them.

But not many are buying into this Jacksonville shooting post. The first giveaway is the blurry picture of Paul Walker used in the post. Walker tragically died in a car crash in 2013.

The image of Paul Walker used in the post is from when he was alive. It appears to be from the set of the film, The Fast and the Furious, explaining the actor’s bloody and bruised face.

Furthermore, the authorities have reportedly identified the real gunman as 24-year-old David Katz of Baltimore.

There’s no Corey O. Graeff with connections to George Soros. And there aren’t any political machinations behind the shooting reported at this point, either.

Katz was reportedly participating in the Madden NFL 19 eSports qualifying tournament at the GLHF Game Bar inside Chicago Pizza. The online game tournament was being live-streamed on Twitch, and the graphic audio scene of Katz opening fire on mallgoers with a handgun was captured.

According to reports, David Katz died of a self-inflicted gunshot wound.

The FBI is currently investigating the incident, however, the motive behind the shooting hasn’t been disclosed yet.