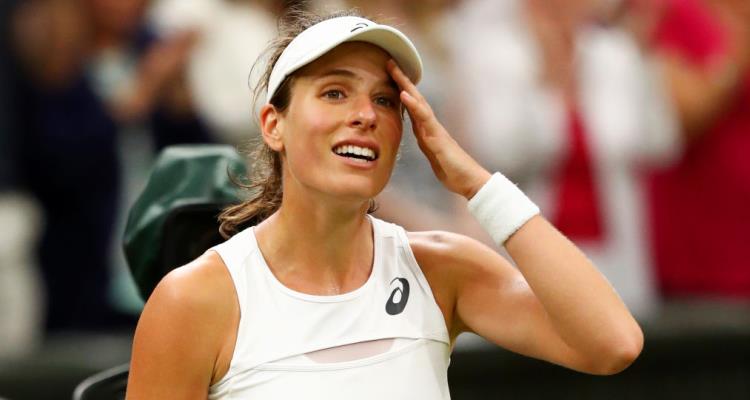 Now that British tennis pro Johanna Konta, 26, is at Wimbledon this year, everyone wants to know about Johanna Konta’s boyfriend! Who is Johanna Konta dating? To learn more, have a look at our Jackson Wade wiki.

Who is Jackson Wade?

Jackson Wade’s age is 24 years old and he’s a photographer and filmmaker, who has been dating Konta since April 2017. According to his LinkedIn account, he studied production and filmmaking at SAE Institute Oxford and graduated in 2014. During his time there, he studied cinematography, production, camera operation, commercial filmmaking, and documentary. After he graduated, he stayed on as a supervisor in the Digital Film Making Degree Programme.

According to his LinkedIn profile, “The Lead Supervisor is responsible for the leadership of a team of supervisors to ensure the continued operation of the equipment in the SAE Institute labs, suites and studios, monitoring OHS.”

In a statement on SAE’s website, Wade said: “There’s probably never going to be another point in your life when this level of equipment is so readily available for you to use so get in the studios and start learning every single aspect of it, the lecturers encourage this as much as possible and are always around to help. Take advantage of it because the time flies by so quickly and you need to be a pro with a kick ass portfolio by the time you leave.” Sounds like this man really has a passion for what he does!

He Owns His Own Business, Too!

Not only is Wade creative, but he also has a business mindset to go with it. He’s co-owner of 90SecondStory, which is located in Middlesbrough, North Yorkshire. According to the website, Peter Smithson and Daniel Michael Smith are the firm’s directors. The company creates films for other businesses throughout the U.K., and they work with marketing departments.

The website reads: “Clients appreciate the way they demystify the price of the production process and give them a real unit cost for their video content requirements.”

At the moment there’s no exact figure on Jackson Wade’s net worth, but he appears to be steadily working at doing what he loves most.

It looks like Konta isn’t the only connection Wade has to tennis! In 2016, Wade was brought on by the Lawn Tennis Association, Britain’s tennis governing body. His skill level makes him uniquely qualified to operate as a photography manager, so it’s no surprise that he got the contract.

Excited to be featuring in this week's @youmagsocial! ?☀?

His training speaks for itself on his LinkedIn profile which reads, “My training has been both via Higher Education (1st Class Digital Film Making Hons Degree) and through my experience within the industry as a freelancer and through my self-start company Erimus Productions, through which I have co-created various music videos, short films, corporate promotional videos and a documentary which has been broadcast internationally on TV stations around the world.”

If you’re looking for Jackson Wade’s Instagram for a look at Jackson Wade’s pics, then you will be disappointed. The filmmaker doesn’t have an Instagram account at the moment—but Konta does! You can certainly get a glimpse into the gorgeous tennis star’s life that way!