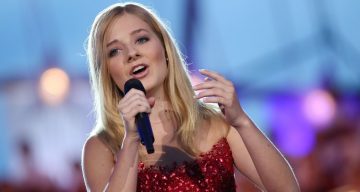 We imagine if you had told her in 2010 that headlines would read “Jackie Evancho singing national anthem at President-elect Donald Trump’s inauguration!”, she wouldn’t have believed you. But it’s true! The young girl we were introduced to on America’s Got Talent six years ago, is quickly becoming a household name! In this Jackie Evancho wiki, we will give you all of the details you need to know, including Jackie Evancho’s age, how she was discovered and everything in between. This is your quick start guide to the life and career of Jackie Evancho!

The Beginnings of a Star

Jacqueline Marie Evancho was born on April 9, 2000. Her father, Michael used to run a video security business and her mother is named Lisa. The second of four children, Jackie showed an interest and a talent for singing at an early age after seeing the film version of the Andrew Lloyd Webber musical, The Phantom of the Opera. Noting that her daughter loved the musical as much as she loved singing to it, Lisa bought her the DVD. Jackie would begin entering talent competitions shortly after that at the tender age of eight. It wouldn’t be too long after that Jackie would grab the attention of some very big players in the music industry and the nation itself.

Shortly after he first talent competition, Jackie Evancho’s YouTube videos started getting some attention as did her progression in various talent shows. She began singing with choirs and even got the attention of mega-producer, David Foster, with a video sent to him in 2009. The young girl’s stunning vocals won her a spot on Foster’s “David Foster and Friends” concert, in October of 2009. Jackie Evancho’s singing videos would also help her gain her biggest break yet in 2010.

Evancho had unsuccessfully tried twice to gain a slot on America’s Got Talent before winning a position via the television show’s YouTube contest. In short order, Jackie blew away the judges time and time again, eventually making it all the way to runner-up! The television show helped catapult her into stardom. Soon, Jackie was touring and even made an appearance on The Tonight Show with Jay Leno. All of the exposure helped Jackie land her first major label record deal when she signed with Columbia Records in October of 2010. 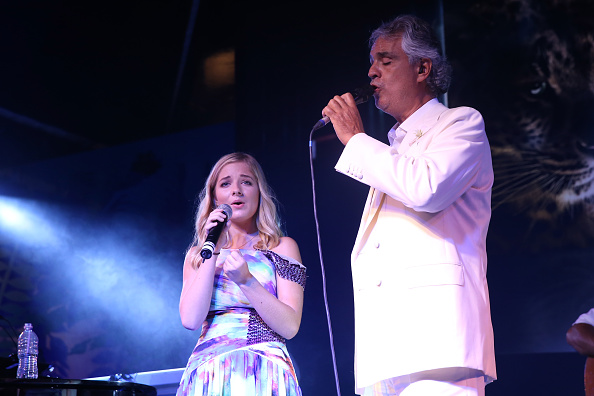 Albums, Charts and the Public Eye

Jackie’s first major label EP was entitled O’ Holy Night, a four-track disc of traditional Christmas favorites. Her second album, Dream with Me (produced by David Foster) was released in 2011 and made a huge impact, debuting at number 2 on Billboard’s 200 charts. It also hit the top of Billboard’s classical chart and debuted in the fifth slot on the UK’s album charts, making Jackie the youngest artist ever to debut on the UK charts! The success of her work would make Jackie a true crossover star between the world of classical and pop music.

Unfortunately, even for a girl so young and talented, Jackie and her family couldn’t completely escape the public eye, but the family turned a negative into a positive. Jackie Evancho’s sister, Juliet is transgender, but instead of hiding it or staying in the closet, she made her story public. Little sister Jackie and the rest of the family came out in full support of Juliet, hoping that it would help other teens facing similar issues. As Jackie would tell CBS, “The Evancho family is under the microscope enough as it is and for her to come out is just really hard. But she’s so brave and I’m proud of her for that.”

The 44th and 45th Presidents

Singing for Donald Trump’s inauguration won’t be the first time Jackie has sang for a president. In 2010, Jackie sang for President Obama at the national Christmas Tree lighting! So, her being chosen as the singer of the national anthem at Trump’s inauguration isn’t surprising. As a sixteen-year-old opera singer, she isn’t offensive to either the right or the left side of politics, and her talent is more than exceptional for such an honor to satisfy both sides.

Opera Can Make You Bank!

While opera and classical music don’t really strike us as the most financially rewarding of the music genres, Jackie has proven that there is definitely money to be made, but only if you have the drive and the talent to make it big. Between album success and touring, Jackie Evancho’s net worth sits at approximately 2.5 million dollars! Given that’s she’s only sixteen and her appearance at the inauguration may help further sales of concert tickets and albums, this might only be the tip of the iceberg. Sixteen and worth millions, think about that the next time you hear one Jackie Evancho’s songs!