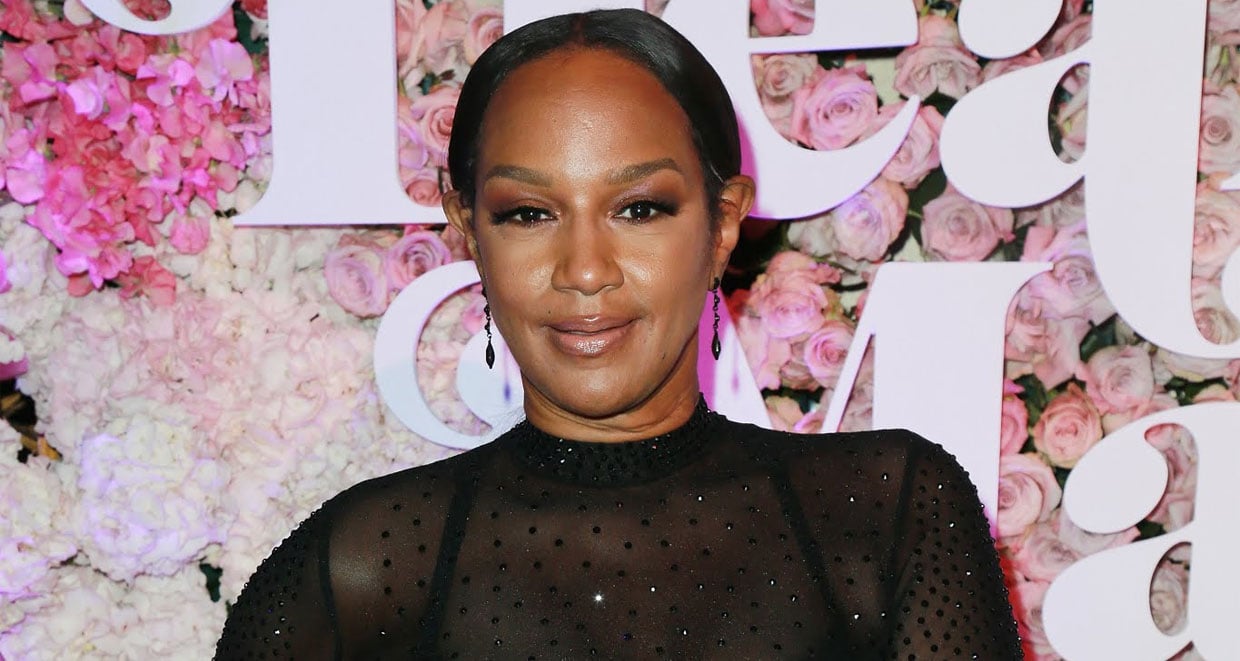 Jackie Christie is the wife of retired basketball player Doug Christie, but she has made sure she doesn’t stay in his shadow! The entrepreneur and uber-dramatic fashion enthusiast has been a model and designer in the past. And now, with her stint on reality TV, a famous cosmetics line, and a socialite image, Christie is shining bright like a diamond!

Christie’s life has been sprawled across tabloids and TV, as she is one of the main cast members of the reality show Basketball Wives on VH1. (And she certainly keeps viewers entertained with her dramatics and attitude!) She has been married to former LA Clippers player, Doug Christie since 1996, and the couple renews their vows every year—festivities and guests included!

Who Is Jackie Christie?

Jackie Christie is the owner of Slayed Cosmetics and is a reality TV star known for her eccentric role on Basketball Wives. She and husband Doug Christie have two children; Chantel and Doug Christie Jr., and Jackie has a daughter named TaKari (from a previous relationship) who was born in 1990.

Christie’s stint on the popular reality series has made her one of the tops searched reality TV stars in the USA! (And if you’ve watched any of her most outrageous moments on-screen, it’s easy to see why!) She’s been a fixture on the show since it began in 2011.

According to reports, Jackie Christie’s life was in pretty rough shape before she met Doug. She was in a relationship with a man (TaKari’s father) who was reportedly involved in drug dealing to earn a living. 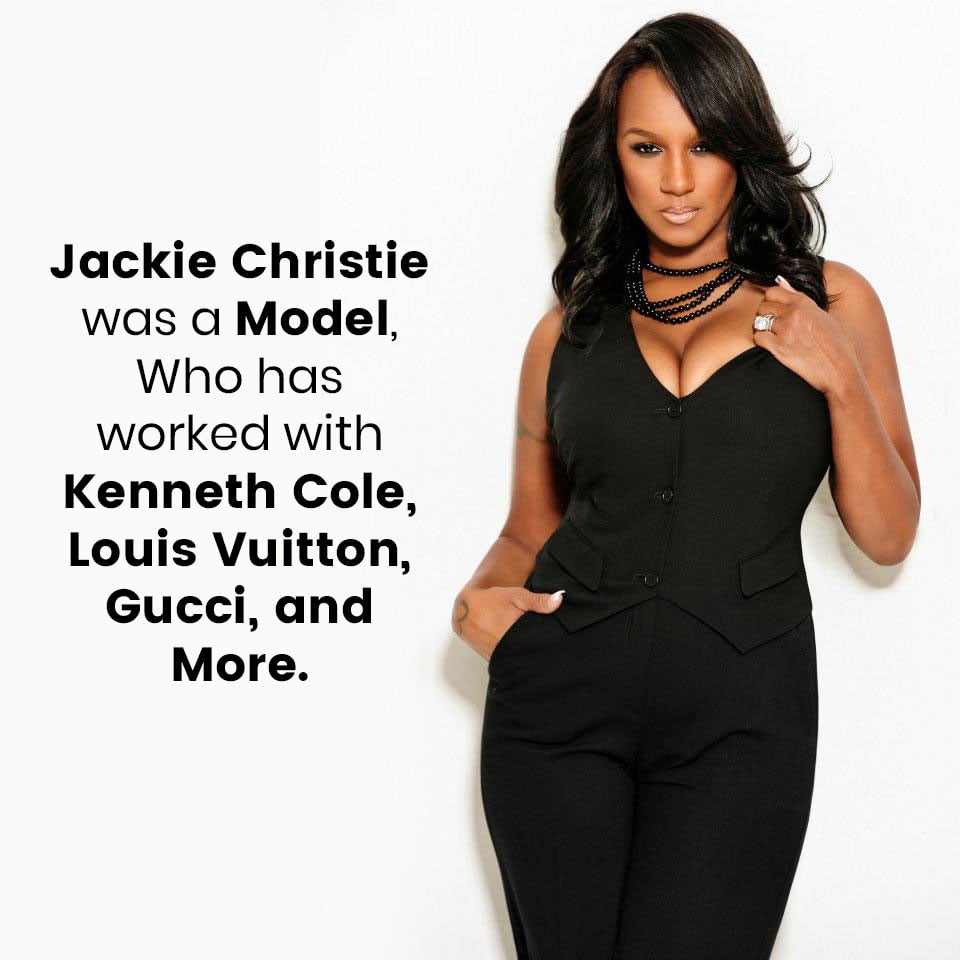 She was also a model in her earlier years when she originally met Doug, and at that time she worked with big names like Kenneth Cole, Louis Vuitton, Gucci, and more. Her model alter ego’s name was Mahogany.

She was born on July 7, 1969, making Jackie Christie’s age 48. She was raised in Seattle, Washington and years later, she got involved with a man named Tyrone. Christie and Tyrone became parents TaKari Lee, but things began to go downhill. According to reports, Christie and Tyrone were together in the drug dealing business, but he was caught and incarcerated for up to 50 years.

So, they were on their own. That’s when things began going south for mother-daughter duo, Jackie and TaKari. On The Breakfast Club, Christie said that she and her own mother were best friends, and explained that at that time, she had asked her mother for help with TaKari.

Jackie Christie’s mother worked at a hospital at the time, and she was asked to retire to help with raising TaKari. Takari was then reportedly raised by her grandmother, until she passed away in 2012.

Christie expressed that she has always given her estranged daughter all the love and comforts a kid needs to grow up in a stable home, but she said things were just never enough for TaKari.

Nonetheless, Kari (as she is often referred to) was well cared for, despite coming from a broken home. Her step-father Doug Christie also played a huge role in raising Kari, who was only a toddler when her mother met the basketball star.

Jackie Christie originally met Doug Christie in 1992 in Seattle at a sports bar, through mutual friends. The two were set up when their friends felt like they were perfect for each other, and it was like love at first sight. Takari was only three years old at the time, but Doug loved her as his own.

A few short years later, Doug, completely infatuated with Jackie, got down on one knee and proposed. He explained that he would marry her right there that day, but instead they decided to do it three days later! Since the couple married in such a hurry, some of their friends couldn’t attend.

“So we said, ‘Let’s do a renewal next year and invite everybody.’ It was just such a beautiful experience, coming together and celebrating our first year, that we decided to do it every year and make it a family tradition,” Christie said in an interview. They have since added two more children to their family; Chantel and Doug Jr.

Doug and Christie have been married for 22 years now, and they make sure they renew their vows every anniversary. They celebrated their 20th anniversary in Portugal when Doug and their children surprised her with a decorated altar, a makeup artist, a dress, and everything needed to make a perfect 20th-anniversary work!

The surprise wedding was aired on an episode on Basketball Wives LA, but it doesn’t look like TaKari attended the wedding. Needless to say, it’s pretty impressive these two survived 20 years of marriage, 15 seasons of Doug playing in the NBA, and over 5 seasons of reality TV!

As mentioned, Jackie Christie has three children, two of which are of Doug’s. This hardworking mother says that she loves all her children equally and has never been biased towards any of them, but TaKari begs to differ. The rift between her and TaKari Lee has led to a lot of public defamation of her image and a lot of drama stemming from their differences.

In an interview, Christie has said that it was TaKari’s choice to stay estranged from her, and that it was not something that was mutual.

But true colors were revealed in April 2017, when TaKari made sure the world knew her mother was a bit of a fake. The scandal broke out when a GoFundMe account was set up for TaKari’s little boy Jaxson encountered an incident while attending daycare.

The baby sustained burn injuries on his face, neck, and chest area, and the crowdfunding site was set up to help TaKari with the medical expenses needed to help him recover.

When people dug around a little and found out that the baby was reality TV star Jackie Christie’s grandson, tabloids began clawing at her image! More importantly, people wondered why Christie herself wasn’t helping out her daughter and grandson with the expenses.

Why would a well-to-do mother’s daughter ask for money through crowdfunding? Did Christie even know that her grandson was burned? These were the questions being asked, to which Christie had only one thing to say. She wondered why she should publicly donate to her own daughter “when she could’ve come to me?”

However, the child was taken care of and was treated for his injuries, which was all funded by the daycare center as the child was in their care when he got burned. In fact, even one of Christie’s Basketball Wives co-stars (Evelyn Lozada) helped TaKari out! (Christie was not impressed and it erupted a serious Twitterstorm among the three.)

But according to Christie in her interview with The Breakfast Club, the GoFundMe money that TaKari received was all spent on weed and miscellaneous things!

Christie also said that TaKari, along with her other two children, are all named in Doug Christie’s will, and will receive $8.0 million each after the deaths of both Doug and Jackie Christie.

Christie is a grandmother; even though she’s reportedly estranged from TaKari, she has three kids. Christie is also a grandmother to her and Doug’s daughter Chantel’s baby girl, Saniyah, who she welcomed in 2017 with the basketball star, Stacy Davis.

Meanwhile, Doug Christie Jr. is 17-years-old and is a student-athlete, who plays basketball like his father.

Jackie also has her hand in the entrepreneurial pot for women looking for affordable and reliable cosmetics. Slayed by Jackie Christie was started with a vision; to provide women with the perfect fashion and makeup solutions. Slayed’s products include mascara, eyeshadow, lipstick, eyeliner pencil, and bronzer.

Her products range between $14-$18 and you can buy them from the official Slain by Jackie Christie Cosmetics website.

She is also an author of numerous books including No Ordinary Love, Proud to Be a Colored Girl, In The Land of Sex & Money, Sexual Relations, Woman, and Luv Pons. 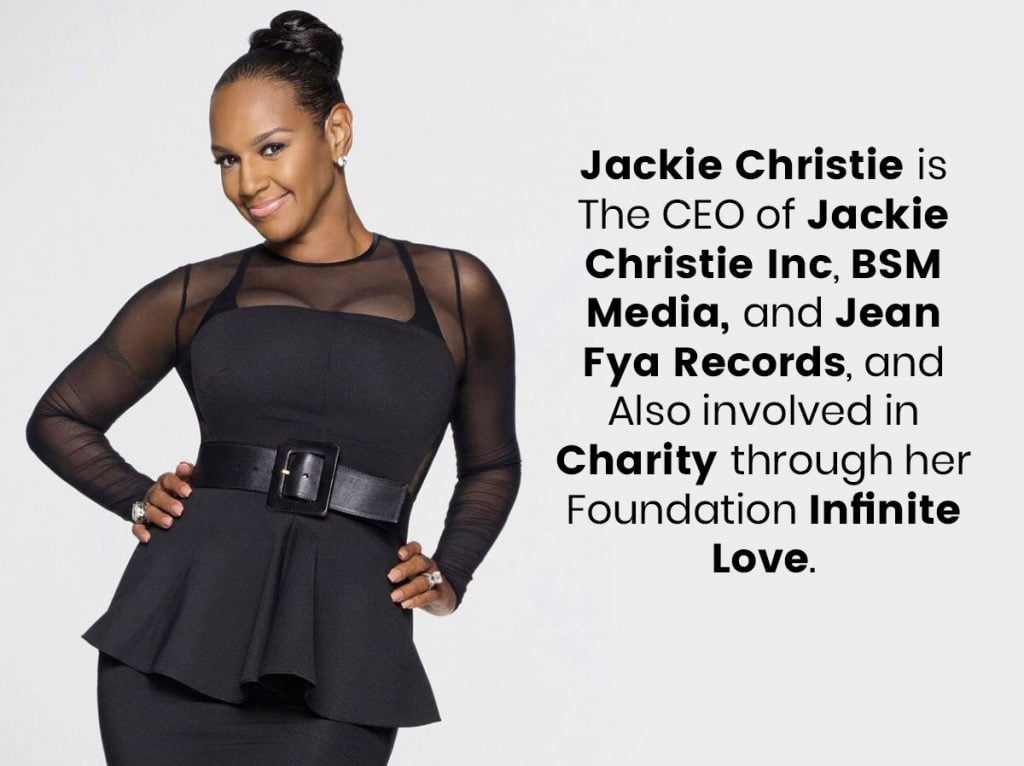 She is also the CEO of Jackie Christie Inc, BSM Media, and Jean Fya Records, and is involved in charity through her foundation, Infinite Love.

All sales made through her clothing line, Colored Girl, have been donated to help single mothers across the globe. The Infinite Love foundation has helped families through their difficult times.

“There are so many causes I’m involved with my true mission is to lend support to the underprivileged, and suffering,” Christie expressed.

Christie and Doug bought a truck back when they started the Infinite Love Foundation, and they began giving back to the society with food, care packages, hygiene supplies and more.

Jackie Christie’s estimated net worth is $10.0 million, thanks to her brands, business ventures, and appearances on the show. Though it is not confirmed what she is paid per episode of Basketball Wives, it could be upwards up $20,000 (as TMZ revealed that is what her co-star Evelyn Lozada was demanding in order to stay!

She is also considered a huge social media influencer, and along with her own brand, she also promotes many other products on her Instagram page, reportedly earning approximately $1,400 per endorsed post online!

She certainly knows how to make money and market herself for success. Speaking of success, the Christie’s should never need to worry about money, as aside from Jackie’s net worth, her husband’s is enough for both of them to live off; the former NBA star is reportedly worth a whopping $50.0 million!