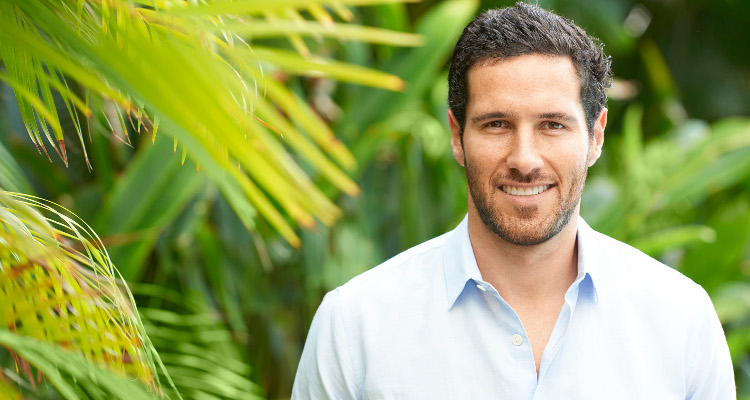 The guy who creeped out Rachel Lindsay on The Bachelorette with his awkward dates and kisses is back on the franchise to find love! Jack Stone is on the current season of Bachelor in Paradise and it looks like he will not leave a single “stone” unturned until he finds someone. Check out everything you need to know from Jack Stone’s wiki right here.

Jack (the Ripper) Stone from Bachelor in Paradise wants people to know one thing: He is not a serial killer! The first thing the Rachel Lindsay reject said on BiP season 4 episode 1, was, “I just want to go on the record that I haven’t killed anybody.” He may not have physically killed someone, but he is definitely a mood killer! Though Bachelor Nation labeled him a creep after his conversation with Rachel on The Bachelorette, we can only wait and see what Jack has in store for us in Paradise. Before  the real drama begins on BiP, here’s everything you need to know in Jack Stone’s wiki.

Who Is Jack Stone?

The 32-year-old Jack Stone is from Dallas, Texas. According to his ABC bio, outside of Bachelor Nation, he works as an attorney in Dallas. Stone admits that he is hard on himself, competitive, and an anxious fellow. We know all about his anxiety by now! He also confessed that the craziest thing he did is skydive in the Swiss Alps. He likes roses without thorns and claims that there’s a metaphor in there (oh, Jack jokes!), but says that his favorite flower is a tulip.

A truly amazing mom. Miss her every day.

Who Does Jack Idolize Most?

Jack Stone’s mother bravely fought cancer until she lost the battle, and he is in total admiration of her. Stone respected his mom more than anything and said that he “Admired my mom. While battling cancer, she always stayed positive and had a zest for life until the very end.” This shows a side to him that we have yet to see on TV. Maybe Paradise will help him drop the creepiness and bring out his sweeter side?

Jack Stone loves his dogs and takes them on walks every time he is in his hometown. He also likes working out and trying new restaurants. He doesn’t sound so bad now, does he?

Jack Stone on Bachelor in Paradise

Stone is not new to Bachelor Nation, and his experience with Rachel Lindsay may have helped his game. He is now on Paradise to fall in love and get engaged. This time, he is speculated to be seen with Danielle M. But it’s way too soon to say if the couple will be together for long.

Welcome to #Paradise @jackjstone ????☀????Our favorite guilty pleasure is back tonight! Tune in to @abc @bachelorinparadise for the season premiere! #BIP

On the other hand, Stone was also seen having an intense conversation with Amanda Stanton. We all know that the couples might change as the season progress, so anything can happen! Will Jack Stone find his partner in crime this season of BiP? Only time will tell!

Stone is a fit and good looking guy (apart from the “Ripper” look that he can gives out), and his Instagram posts don’t fail to show it off! He looks like a fun guy and seems to love his dogs a lot. Check out some of Jack Stone’s drool worthy Instagram pics below.

Looking on the bright side. I had a great experience and am excited for the next chapter of my journey. Thanks for all of the love and support.

It’s a sunny life for him!

That face you make when you’re a contestant on #thebachelorette and you plan on raping and murdering @therachlindsay if you win. #jackstone

A post shared by Another Bachelor Podcast (@anotherbachelorpodcast) on Jun 27, 2017 at 6:29pm PDT