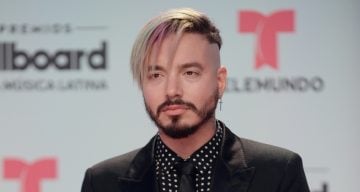 It’s been months since the big Oscars mix-up, so now it’s time for another awards show: The MTV Movie Awards, but with a twist! Starting this year, the annual awards show is adding TV to the mix for its 26th year. That means, actors from the big and small screen will get the chance to share the stage for a chance to win. The network has also renamed the awards categories and added some new ones of their own. Not to mention, singer J Balvin has something special in store for fans on the big night, and we’ve got all the details right here.

The MTV Movie & TV Awards will take place on Sunday May 7 at 8:00 p.m. EST at the Shrine Auditorium in Los Angeles. And this time they’re being broadcast live, instead of being taped. The awards show can also be streamed live with a TV subscription via the MTV app or on mtv.com/live-tv.com.

The night will be hosted by Mike & Dave Need Wedding Dates star, Adam DeVine, 33, but he definitely won’t be the only star on stage. The first presenter of the show will be Billions star Asia Kate Dillon, a gender non-binary actor who wrote a letter to the TV Academy to make the categories more inclusive and neutral. The night will also be filled with celebrity presenters such as: Allison Williams, Gal Gadot, Snoop Dogg, Amy Schumer, Zac Efron, Hailee Steinfeld, DJ Khaled, Milo Ventimiglia and the cast of the hit Netflix series, 13 Reasons Why. Also in attendance will be: Emma Watson, Trevor Noah, Taraji P. Henson, Josh Gad, Rebel Wilson, RuPaul and more!

In between all the stars getting their golden popcorn statuettes, Big Sean will perform his song “Jump Out the Window” from the album, I Decided, and Miley‘s younger sister Noah Cyrus will take center stage to sing “Stay Together” from her upcoming debut album, NC-17. And reggaeton singer, J Balvin will be joined by Camila Cabello and Pitbull, to sing the first televised performance of “Hey Ma,” from the Fate of the Furious soundtrack.

When is the J Balvin Tour?

If you’re interested in listening to a few more J Balvin songs, then his upcoming “Energia Tour” is just what you need! Tickets go on sale on Friday May 5 and we have the full list of tour dates below.

Grab your tickets now and don’t forget to watch the MTV Movie & TV Awards tonight on May 7 at 8:00 p.m. EST.