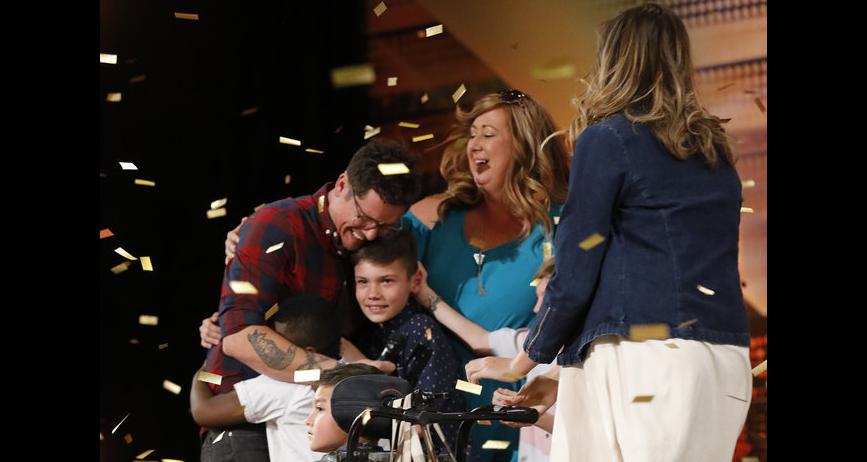 Michael Ketterer didn’t win America’s Got Talent season 13 on the September 19 finale. And it appears he’s on a downward spiral from there. He had earned Simon Cowell’s golden buzzer at the audition and was invited by Garth Brooks himself to perform at his concert. But he’s now in the spotlight for domestic violence against his wife, Ivey Ketterer.

Michael Ketterer’s voice and his family’s story tugged at everyone’s heartstrings the moment he came on America’s Got Talent season 13. Michael Ketterer wife Ivey Ketterer supported him behind the scenes along with their children. But the couple has now got everyone’s attention since Michael was arrested for domestic violence. Our Ivey Ketterer wiki elaborates on the Ketterers’ inspiring story and their latest dispute.

Michael Has Been Arrested for Domestic Violence

The Ketterer family’s story has been touching everyone since Michael auditioned for America’s Got Talent. Michael, a pediatric mental health nurse by profession, and his wife, Ivey, awed viewers with their selflessness by adopting and raising five boys alongside their daughter.

Though he didn’t win, Michael’s music career was on a trajectory to stardom. Until he was arrested in Hollywood on September 20.

According to TMZ, Michael and Ivey Ketterer got into a dispute on Thursday afternoon when cops were called. The LAPD authorities who arrived found a visible red mark on Ivey.

The police arrested Michael on charges of felony domestic violence based on the injury. He was released after posting a bail of $50,000.

The AGT runner-up said that the arrest was a misunderstanding. Though he had an argument with his wife, Michael claims Ivey didn’t want to press charges. He was arrested anyway because of the mark on her.

Since the injury was minor, Michael’s domestic violence charges will be downgraded to a misdemeanor. However, the damage was done.

Garth Brooks had invited Ketterer to perform at his concert ahead of the AGT finale. However, in a Facebook Live video, Brooks said that Michael will no longer be performing at his Notre Dame concert on October 20 following news of his arrest.

She Nearly Died at Childbirth

What led to Michael and Ivey Ketterer becoming parents to their children is a truly remarkable story.

Michael and Ivey, who reside in Anaheim, California, got married at a young age. He was 23 years old when he became a father the first time.

When Michael Ketterer’s wife was pregnant with their first child, she suffered complications and gave birth to their daughter, Sofia, after an emergency C-section was performed.

But the Ketterer girls fought to survive. A doctor told Michael that Ivey had a 30% chance of survival while their newborn had only 10%.

Ivey and their daughter nearly died at childbirth but miraculously survived.

“The doctor said the woman I loved the most in life and my new daughter, they probably wouldn’t make it through the night … I spent the whole night praying, and miraculously my daughter pulled through,” said Michael Ketterer on AGT.

Ivey and Sofia survived, but the doctors warned the young parents that Ivey could be in danger again if she had a second pregnancy. So, the Ketterers decided they wouldn’t have another child after Sofia, and Ivey got a tubectomy so that she wouldn’t get pregnant again.

However, they ended up becoming parents to five more kids.

Sofia Convinced Them to Adopt

Tonight history was made?!!! I could not be more proud to say that @ketterermusic is my father!! He is an absolute wonderful man. Thanks so much for all my friends coming and supporting us?!!! Means the world!! ⭐️⭐️#simonsgoldenbuzzer #agt #ketterlife #whataworldchanger #⭐️ofahumanbeing

When Sofia was seven years old, she had vivid dreams about three boys that told her she had to rescue them as they were in danger. Because of her dreams and the desire to have siblings, Sofia urged her parents to adopt.

After three years of Sofia’s persistence, Michael and Ivey agreed to begin the adoption process. Michael said the very first call they got was for three little boys aged four, three, and one.

Sofia’s brothers, Jared, Chase, and Jeriah were adopted by Michael and Ivey. The couple had learned that the boys have another sister who was also named Sofia.

Two years after adopting a boy named Rodee, Ivey had a dream of another boy. Through a series of events, the family adopted Shawn, an African-American child.

One of Their Sons Has Cerebral Palsy

A couple of months after the brothers had joined the family, Michael and Ivey got a call about another boy named Rodrigo. He had cerebral palsy and was physically abused.

The Ketterers immediately decided to adopt him, too. They named him Rodee, and he’s their living miracle.

At that time, Ivey felt that God was entrusting Rodee to her, saying, “If I am giving Rodrigo to you, it is because I want him healed.”

Since being taken in by the Ketterers, Rodee has shown remarkable improvement, even amazing his doctors.

Michael had blogged about the legal battle to get parental rights over Rodee. He recalled the abuse Rodee went through at the hands of his caregivers.

Rodee’s caregiver shook him violently when he was one year old, and the child sustained skull fractures. The abuse caused the blood flow and oxygen supply to Rodee’s brain to deplete, debilitating him.

His mother had given up her parental rights, and a judge terminated the father’s rights over the child. Subsequently, the Ketterers got custody of Rodee.

She Balances Work with the Kids

Ivey Ketterer’s age is a mystery, but we do know that she celebrates her birthday on January 14. She is employed at a law firm that allows her flexibility to work from home a few hours a day.

Ivey loves communicating with hashtags and emojis. She particularly uses the family hashtag, #kettererlife. She was appealing for votes on social media on behalf of Michael.

However, since domestic violence news broke out, both Michael and Ivey have turned off the comments on their Instagram pages. They haven’t posted anything on social media since the arrest and Michael has turned his Twitter account to private. The move is likely because of all the disparaging comments from social media users about Michael.

Raising six kids can’t be easy. Michael handles most of the chores while Ivey is at work. But she handles the laundry, a task that Michael dreads with the mess his children are capable of.

Grocery shopping with the six kids is another difficult task. So Ivey opts to order all the groceries online and have them delivered to their doorstep.

Michael is also active with the local ministry. So, the family gets to travel often on vacations every time he is invited to lead worship.

Michael Ketterer didn’t win the $1.0 million prize on America’s Got Talent. His popularity appears to have hit a roadblock with the news of his arrest. But With a supportive and loving wife like Ivey Ketterer by his side, there is nothing he can’t accomplish.

Also Read: Some of the Most Interesting Facts about Courtney Hadwin