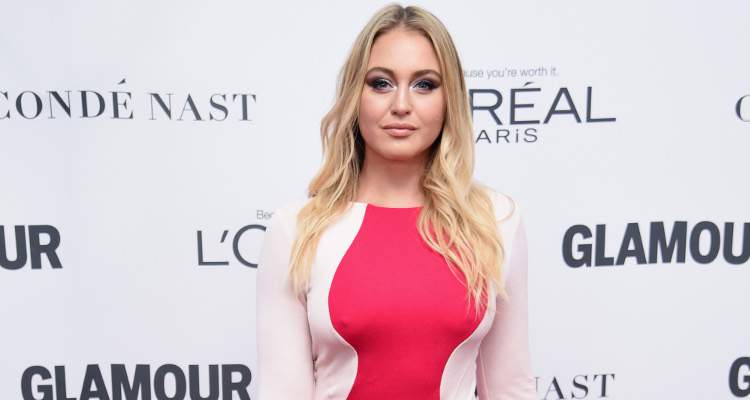 English model Iskra Lawrence continued to promote body positivity at the SAG Awards. She wore a beautiful black gown with a hip-high slit, showing off her legs and cellulite. Basically, she slayed. After seeing her killing it on the red carpet, a lot of people are curious to know about Iskra Lawrence’s boyfriend in 2018. To know who the beautiful model is dating, then keep reading.

Born Iskra Arabella Lawrence on September 11, 1990, she is 27. The model is strictly against photoshopping and retouching her photos. She recently posted a photo of herself at the SAG red carpet on Instagram with the caption, “Cell-u-LIT up the red carpet last night.”

She models for Aerie, as well as lingerie brand, Adore Me. In 2016, she was included in BBC’s World’s 100 Women list. Last year, she was named a multi-hyphenate in Maxim‘s Hot 100. Just last week, she launched her health and wellness app, EveryBODY with Iskra.

About the app she said, “Because of what I went through, my dream has always been to get self-care (mental, emotional and physical wellness) education into schools. And I’ve started that, but I also wanted to create something for adults that still needed a safe space that’s judgment-free to go on a positive journey of self-love and that’s why I created EveryBody with Iskra.”

Undoubtedly, Lawrence is doing very well for herself when it comes to her professional life. But what about her love life? Is Iskra Lawrence married or seeing someone? We have the details on who Iskra Lawrence’s boyfriend is (if she has one), and her last known relationship.

?WE’RE LIVE? You can signup worldwide to @everyBODYwithiskra ? (link in my bio)? The first ever health, fitness and self-care program in the world to give you full access to the tools to help you feel happier and healthier. No more diet culture BS? No scales, measurements or equipment needed. Private 24hr Facebook community with the spark squad so you’re fully supported. And workouts that are fun and recipes to inspire you. No restriction or bullying, no guilt or judgement. I’ve been creating this program and content for over a year and I’d love your comments and feedback. I’ll be live on the program and checking in to see how you’re all doing from all over the world. So excited for you to join #everyBODYwithiskra and for us all to go on a self-love and well-being journey together❤️ Sign up and start today at www.everyBODYwithiskra.com and you’ll get full app access for free too and there’s even a 7 day free trial to see if its for you???

Currently, it looks like the 27-year-old is single. Her Instagram posts are free of potential boyfriends, which could mean that she is single, or that she really wants her relationship to be kept quiet.

According to sources, Lawrence was once in a relationship with a professional soccer player, Andre Wisdom. Last Valentine’s Day, she flew down to Salzberg to see her man. Apparently, Wisdom surprised her with red roses, which she shared with fans on her Instagram Story.

As of now, there is no news about whether the pair are still together or not. Though they always had limited posts of each other on social media, they have not been featured on each other’s accounts for quite some time now. But whether that means they broke up or are just keeping things low-key is yet to be seen.