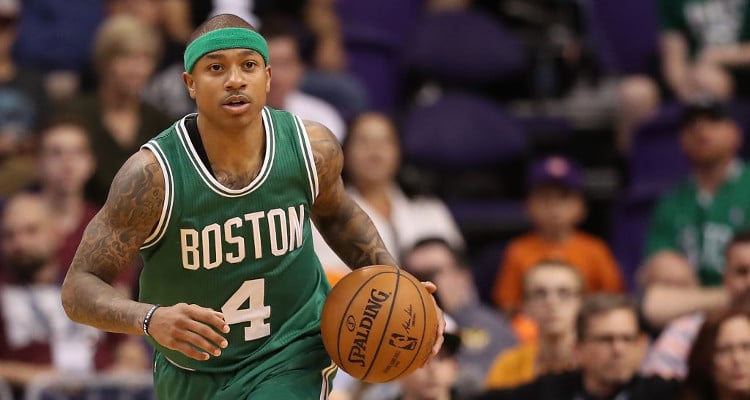 It was a tragic start to the NBA Playoffs for the Boston Celtics when the team’s point guard, Isaiah Thomas’ sister passed away one day before the game. Thomas’ sister died in a car accident, just before Sunday night’s game against the Chicago Bulls.

The Boston Celtics lost to the Chicago Bulls on Sunday night’s (April 16) Game 1 of the NBA Playoffs, but neither teams are the talk of the game. A day after losing his sister in a tragic car accident, Celtics point guard, Isaiah Thomas stepped onto the court. He had an emotional moment before the game started, but he was in the zone as soon as he hit the court. Those who asked “will Isaiah Thomas play?” were silenced as soon he stepped out. Find out more about this young player, including information about his sister’s car accident, in our Isaiah Thomas wiki.

He was Named after Another NBA Star

At 5’9″ Isaiah Thomas is by no means short, but he is currently the shortest Celtic. Height aside, he was born to play in the NBA. His father, James Thomas was an avid LA Lakers fan. After the Lakers defeated the Detroit Pistons in the 1988 NBA Finals, James bet a friend his son’s name that history would repeat itself in the 1989 game. “We were betting, and I made a bet that I would name my son Isiah Thomas if the Lakers lost. And the Lakers ended up losing,” James said in an interview.

James’ wife, Tina Baldtrip, wanted a biblical name for her son and insisted on adding the extra ‘a’ making him Isaiah Thomas.

The young Isaiah grew up wearing Isiah’s numbers and looking up to his highlights. He believed that he was related to Isiah and would take on fans who trolled the former NBA player. Now, Isaiah Thomas considers his namesake his mentor, and the two even text each other.

Also Read: Anthony Davis Wiki: Family, Girlfriend, Net Worth, and Everything You Need to Know About the NBA All-Star

Thomas was born in Tacoma, Washington and went to Curtis Senior High School in University Place, Washington. He then transferred to South Kent, Connecticut to repeat a year, due to academic deficiencies. After graduating in 2008, he committed to University of Washington. During his time away from his parents, Knicks star Jamal Crawford reportedly looked out for him.

He was the final pick in the 2011 NBA draft, picked up by the Sacramento Kings, and he earned around $380,000 for his first NBA season. In his final year with Sacramento, Thomas’ salary had increased to about $1.0 million. In the 2014-15 season, he was traded to the Boston Celtics, where he was paid a salary of almost $7.0 million every season.

With total career earnings more than $23.0 million, Thomas has a net worth of $28.0 million. Sports analysts predict he’s looking at a massive payday this year given his amazing stats.

The NBA Star is a Newlywed

The 28-year-old married his long-time girlfriend from Washington University, Kayla Wallace in August 2016, so he’s considered a newlywed in the basketball circles. Kayla is a certified teacher, and her father was a soldier. Thomas loves posting about his family on his Instagram and Twitter, among the various tidbits about his games. Thomas especially showers praises for Kayla, and she returns the love on her own Instagram. He described his wedding day as “by far the best day of my life” on Instagram.

Thank you to everybody who came out to our special day! This was by far the best day of my life. #ThomasWedding #LittlePeopleBigLove #DamnSheLooksGOOD #ThomasBoys

They tied the knot with a celebrity-infused wedding at the Experience Music Project Museum, Seattle. Besides other NBA players, the guest list also included Floyd Mayweather.

The couple was already parents to two cute boys before they married. Isaiah and Kayla Thomas have a son named Jaiden. Thomas also is the father to a son he had with an ex-girlfriend, who is named him after his father, James. Little James lives with his mother and also spends time with his NBA dad. James is obviously a fan of his dad, whom he calls “the greatest basketball player.”

His Sister Passed Away in a Car Accident

Isaiah Thomas’ parents separated when he was a child, and his father remarried a woman named LaNita. Chyna Thomas was the daughter of James and LaNita Thomas.

At just 22 years old, it was reported that Chyna died in a car accident on Saturday, April 15 in Tacoma. According to authorities, her vehicle drifted off the roadway and hit a barrier. She wasn’t wearing a seat belt and was found dead on the scene. Further details haven’t been disclosed as of yet.

Thomas was informed of his sister’s passing after the Celtics’ Saturday afternoon practice. The NBA released a statement sending its condolences to the Thomas family. Many were unsure whether Thomas would play in the Game 1 of the NBA Playoffs on Sunday due to the tragic loss.

The two-time NBA All-Star was clearly devastated, and broke down in tears during the pre-game warm-ups. His teammate, Avery Bradley, stepped up to comfort him. Thomas worked through his grief during the game and finished on 10-of-18 shooting with six assists and five rebounds over 38 minutes. He even paid a tribute to his sister by writing various messages on his sneakers like “Chyna,” “R.I.P. Lil Sis” and “I love you.”