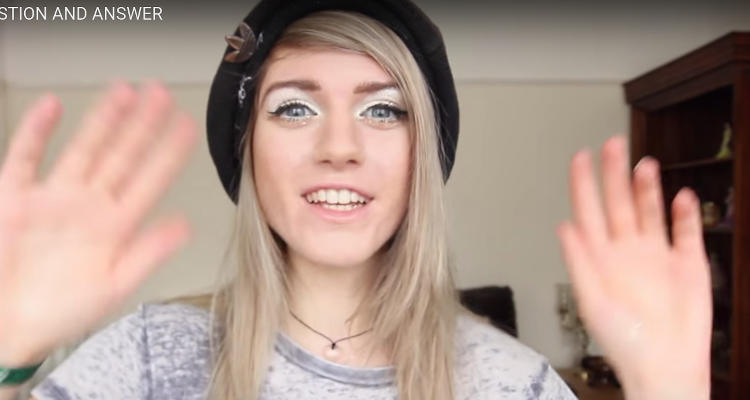 Save Marina Joyce. That’s what fans of the popular London-based YouTube star have been saying ever since they noticed some unusual behavior coming from the fashion blogger’s latest video posts. Is this all a publicity stunt or a desperate cry for help?

Marina Joyce’s YouTube channel has over a million subscribers and over 43,000 views since her debut in 2010. She mainly gives beauty tips and is very upbeat and attentive to her large fan base. She’s based in the United Kingdom, so there’s a good chance that many haven’t heard of her on our end.

Recently, Marina Joyce’s Twitter account has been flooded with concerns, causing the hashtag [sic]#SaveMarinaJoyce, to trend all over the world since yesterday. Lately, her videos have showcased the Internet star with bruises (which she said were caused by an accident that she didn’t want to discuss) and a BB gun in the corner of her room. Fans claimed that she was acting differently despite her protests to try and reassure her loyal viewers.

Now, because of all the miscommunication and speculation of oversensitive fans, many have been searching for terms like “Marina Joyce schizophrenia” and “Marina Joyce publicity stunt” in order to figure out what exactly is going on and to get all the details.

Then there were reports of fans thinking that Joyce was kidnapped by the infamous terrorist group, ISIS, and called the police to help her! Officers came to Joyce’s home, only to realize that nothing was wrong. These recent events have now forced Joyce’s mother to intervene and join in on the Marina Joyce live stream that aired hours ago. In the video, Joyce’s mother said her daughter is fine (as Joyce said earlier). She assured fans that she never whispered the words “help me” but that she whispered “like me” instead. It seems kind of fishy.

And Joyce’s mother addressed the bruises, stating that her family bruises easily. After all, Marina did have some strange beliefs involving temples in Peru. But what’s really going on? Are fans just reading too much into something that isn’t there?

You be the judge and let us know in the comments below!