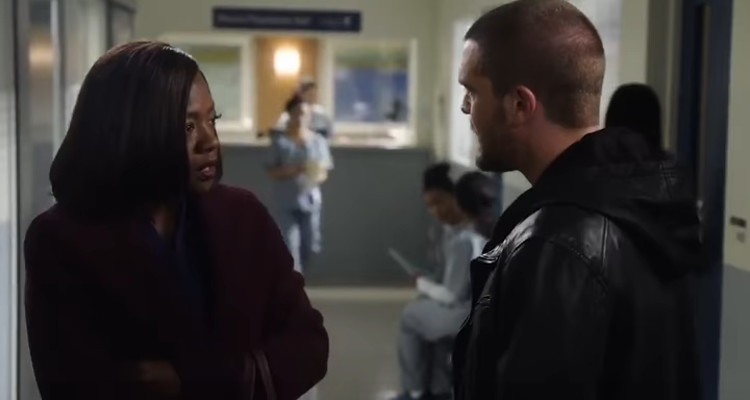 How to Get Away with Murder season 4 began in the aftermath of Wes Gibbins’ death. But last week’s episode left us with a shocking final scene, which seems to suggest that Wes is alive!

At the end of How to Get Away with Murder last season, we were reeling from the shocking death of Wes Gibbins. Alfred Enoch’s character was gone but not forgotten in the current fourth season, with Laurel (Karla Souza) expecting his baby and Annalise (Viola Davis) doing everything to protect it. But the Twitterverse is asking if Wes is dead or alive on HTGAWM. Is Wes pulling some strings from beyond the grave? Here’s some jawdropping spoilers from latest episode of How to Get Away with Murder.

HTGAWM is not new to cliffhangers that has our collective jaws glued to the floor. Annalise’s students follow her blindly and Wes, even more so. The last we saw him, he dies in the fire that burned down Annalise’s house and she didn’t take it well.

In season 4, everyone is trying to pick up their lives after Wes died. Annalise is trying to get her personal and professional life together while helping Laurel, who’s expecting Wes’s child. It was nail-biting episode for Annalise and us viewers, as Laurel gave birth in a broken down elevator!

Over the course of the hour-long episode, Annalise resuscitates the newborn baby, Baby Gibbins is alive and kicking, and a paternity test reveals that Frank Delfino lied about being the father of Laurel’s baby! Cue the gasps!

Between the confusion of people scrambling for the baby, Laurel confesses that Dominic, her ex and her father’s associate, tried to get her to call off her revenge plan. So, Laurel wants to kill Dominic but they are surprised when Frank has Dominic’s phone. Frank admits he killed Dominic and finds out the most scandalous information this season.

In the final scene of this episode, Frank discovered a voicemail from Christophe. For the uninitiated, that’s Wes’ birth name. Cue a flashback to the night Wes died, when he makes this call to his emergency contact, aka Dominic from a cab. Instead of calling Wes back, Dominic killed him instead. But is it the end for Wes Gibbins?

Me trying to figure out how Wes knew Dominic and why Dominic killed him if he did or if he even did kill him and if Wes is still alive where has this man been at #HTGAWM pic.twitter.com/jpTOrRcV7U

Frank may have killed Dominic prematurely because now he has a voicemail from Wes and they don’t know what it’s about. Alfred Enoch’s character is seen leaving the message, “I’m in trouble. We all could be. Call me as soon as you get this,” and Twitter went crazy over the possibilities of this line!

Some on Twitter are actually convinced that Wes is alive, calling Dominic who supposedly killed him. There’s a new theory among the outlandish HTGAWM twists that Wes and Dominic hatched a plan to fake Wes’ death so he could hide in safety. A little farfetched but not impossible!

But here’s the thing. Wes is most definitely dead. We saw his corpse in the morgue and it was certainly not a fake-out. The scene from last night is only a flashback to reveal who his mystery emergency contact. The voicemail was likely left while he was still alive.

Now that only raises more questions. How does Wes know his murderer? Why would he use his birth name? Were they working together? Is Wes dead but Christophe aliver? With these two key players death, the answers will require a lot of searching by Annalise and her students—and fans are dying for answers!

SO IF WES IS DEAD, IS KRISTOFF ALIVE?! #HTGAWM pic.twitter.com/t3SLwhRHPQ

Even if Wes is dead by every definition, it doesn’t rule out the possibility of seeing Alfred Enoch on the show again! HTGAWM loves throwing an onslaught of flashbacks our way for a dramatic effect and frankly, we live for it. Who’s to say we won’t be seeing Wes in these flashbacks, especially now that we know he was up to something behind the scenes which the other characters didn’t know about.

Executive producer, Pete Nowalk has kept the doors open for Enoch’s possible return, too. However, Enoch’s schedule could make it very difficult. He’s currently filming Troy: Fall of a City and set to star in the West End revival of the play, Red, alongside Alfred Molina. We will see Laurel get to the bottom of Wes’ murder (which Dominic did on her father’s orders). It just means there’ll be more mentions of Wes rather than flashbacks!

How to Get Away with Murder airs Thursdays at 10 p.m. EST on ABC.

We. Are. Shook. #HTGAWM pic.twitter.com/ejeAJFWNKl