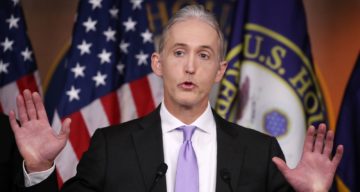 Trey Gowdy is as polarising as a political personality can get. From House Rep to his love-hate relationship with Trump supporters and reviving his legal career after he retired from politics, social media users have a common query whenever Trey Gowdy is mentioned. Some want to know if Trey Gowdy is related to Curt Gowdy, the late sportscasting legend. Curt Gowdy was known for his sports broadcasts in the ‘60s and ‘70s and his long career calling Boston Red Sox games. And when a controversial politician shares a last name with a sports broadcast icon, the question is bound to come up. So, is there is a possible connection between Trey Gowdy and Curt Gowdy? Let’s find out!

Trey Gowdy Is Not Related to Curt Gowdy

Curtis Edward Gowdy was born on July 31, 1919, in Green River, Wyoming. He is the son of Ruth and Edward “Jack” Gowdy. His father, Jack, was a manager and dispatcher at the Union Pacific railroad.

From a young age, Curt showed a knack for athletics and broadcast, participating in the sports coverage both in high school and college. He started his career covering college games in local publications and news stations before becoming an MLB sportscaster in the early ‘50s. He was a Boston Red Sox commentator for 15 years before expanding to national sports networks.

After battling leukemia for years, Curt Gowdy passed away at the age of 86 on February 20, 2006, in Florida. He is survived by his wife, Geraldine “Jerre” Dawkins, and their kids, Cheryl Ann Gowdy, Curt Gowdy Jr., and Trevor Gowdy.

Neither the sportscaster nor his children have an apparent connection to political figure Trey Gowdy. There’s no evidence of them having a familial relation. The similarities end at the shared last name.

The former politician and his wife, Terri Dillard Gowdy, have two children named Abigail and Watson. They are also not connected to Curt Gowdy’s family.