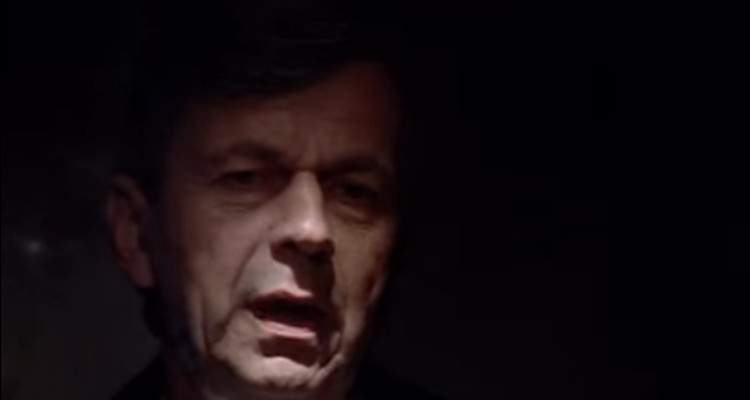 The X-files is back on television! The ‘90s show made a comeback in 2016, and fans couldn’t wait for the next season to air. The X-Files in 2018 has started right back where it last left off.  Fans, old and new, have so many questions about a recurring character—Mulder and Scully’s adversary—the Smoking Man. So, who is the Smoking Man? Is the Smoking Man dead? We’ve got all the answers, right here!

The X-Files airing on TV is every die-hard fan’s dream come true! We’ve followed FBI agents Mulder and Scully’s lives since 1993. It was a time when fan clubs were founded and conspiracy theories were plentiful.

Along with its original stars, this time around, the TV series has also brought the return of an arch nemesis, the Smoking Man. And as it turns out, he has a more significant role than expected as the series progresses!

If you’re new to the show and want to know who the Smoking Man is, then keep reading to find out more.

Who Is the Smoking Man?

Canadian actor William B. Davis will forever be known as the Cigarette Smoking Man from The X-Files. Davis became famous after he took on the role of the Smoking Man, Mulder and Scully’s chief adversary.

Images of the notorious Smoking Man with a Morley cigarette between his fingers are forever engraved in the minds of fans. The real name of the Smoking Man has also been an enigma.

The X-Files fans may remember some of the evil actions carried out by the Smoking Man. He made his wife participate in extraterrestrial experiments, hid the truth that aliens exist, and shot his son. And, he was always evading Mulder, who was later revealed to be the Smoking Man’s second son!

The kidnapping of Scully by the Smoking Man in Season 7 was intriguing for fans. Scully is shown to be drugged and taken to a cabin, and fans have always wondered what happened to her back then.

Did the Smoking Man Die?

William B. Davis has played the role of the Smoking Man in The X-Files with a flair that only he can pull off! Playing the “bad guy” role is no joke, but the Smoking Man has connected with viewers and has added to the mystery of the TV show.

Season 9 of the series showed the Smoking Man hiding out in New Mexico until two helicopters blew up his home and him to pieces. The Smoking Man’s despicable ways had finally come to an end, or at least that’s what we all thought.

You know him as “Cigarette Smoking Man.” Find out his real name. And uncover his secrets. #TheXFiles

But, it was not to be. The Smoking Man appeared in the last moments of last season’s premiere and apparently is here to stay! He looked battered and bruised, but alive—with, of course, his famous cigarette in hand.

Soon enough, the Smoking Man resorted to his nefarious ways, putting into motion an evil conspiracy that he had been working on for years. So, be prepared for more of the Smoking Man’s sinister plots in the new season!

Return of the Smoking Man

There was a huge surprise in store for fans in last night’s season premiere (spoilers ahead!).

The Smoking Man was revealed to be the father of Mulder and Scully’s son, William! Now, that’s something fans did not see coming!

When the Smoking Man had kidnapped Scully, he impregnated her with alien technology to create the “the first superhuman child.”

The X-Files creator Chris Carter spoke about the twist in the storyline saying, “It adds to the characters in an interesting emotional way. And because the audience is now in on this truth, and Mulder and Scully are not, these revelations are huge for this show because they’re huge for the characters. Mulder and Scully’s life history, both professional and personal, are the heart of the show.”

Some friends are always there when you need them. #xfiles #scully #mulder #qotd #quotes #tv #happy

“It does impact it in a big way and you’ll see that in the arc of the series… This fact is hovering over them (Mulder and Scully) and everything they do and say to each other is kind of loaded as they’re walking in the dark. It makes for interesting storytelling to put the audience in a privileged point of view that could ultimately explode in the end,” Carter added.

Fans took to Twitter to discuss the conflicting emotions that the big reveal brought. We think it’s safe to say that no one can wait for the next episode!

#TheXFiles ? after that insane twist you just threw at us ? about the smoking man being Williams father ! I hope you have enough money to give all the xfiles fans therapy after that ! I can’t even think straight right now ?? omg wtf just happened? Is it the truth!? @thexfiles

THAT ENDING HAD ME SCREAMING AT MY TV ?? that episode was INCREDIBLE ?? this season is starting off with a bang ? so glad to have you back!! ? #TheXFiles pic.twitter.com/BiRowKmf9Y