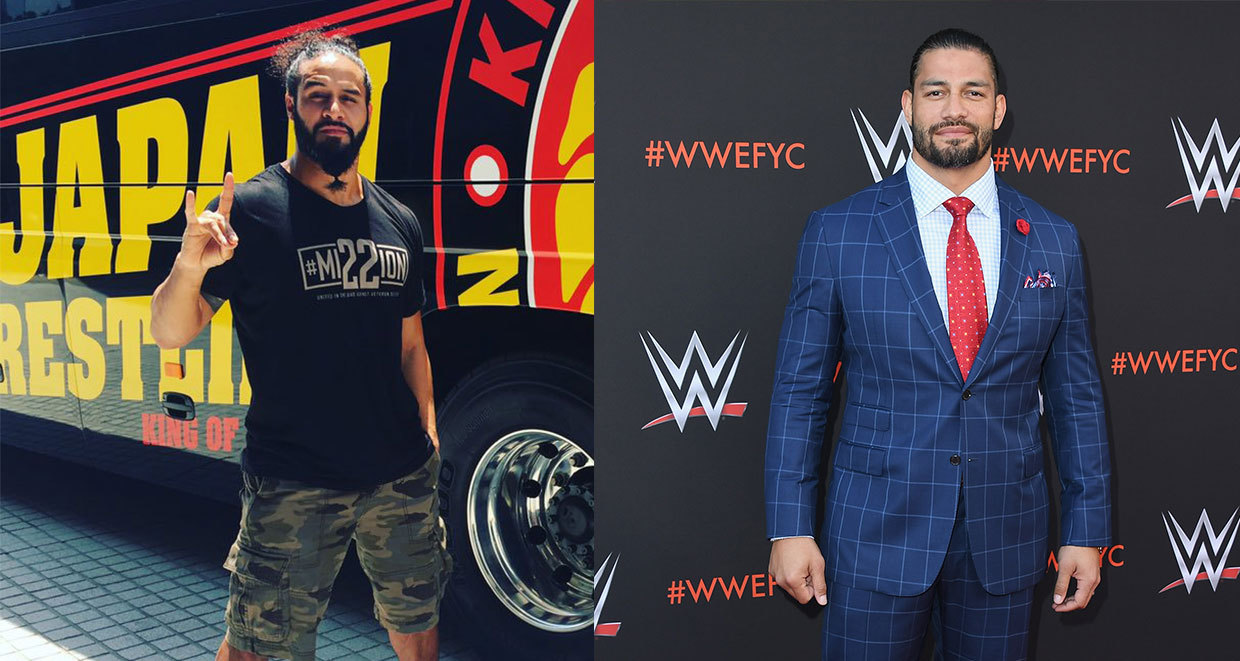 The latest Twitter feud stems from wrestling heavyweights Tama Tonga and Roman Reigns beefing online. Since then, social media users are wondering if this is actually a family feud. Is Tama Tonga related to Roman Reigns? Find out here!

Japanese pro-wrestling star, Tama Tonga, broke out of “Twitter Jail” and ignited a feud with Roman Reigns, famous for being the current face of the WWE. Tonga was under a 24-hour Twitter lockout, due to his recent posts having “violated Twitter’s rules.” With his finger now pointed firmly at Roman Reigns, the two have engaged in an online war.

While their banter is entertaining, wrestling fans can’t help but notice how the two could really pass as brothers! Many wonder if the Bullet Club star is somehow related to Reigns. Are Tama Tonga and Roman Reigns related to each other?

Let’s break down these pro-wrestlers’ family trees to find out.

The Feud That Started It All

Bullet Club’s Tama Tonga tweeted a video of himself cursing at Internet nerds during the New Japan Pro-Wrestling promotions last week. But Twitter cracked the whip on him for his foul language and locked his account for violating their guidelines.

Roman Reigns, who’s gearing up for the anticipated SummerSlam, managed to get a screenshot of Tonga’s tweet before that though. And he shared it while taking a jab at the Tonga, alleging his rant came from a Drake album.

As soon as Tama Tonga’s Twitter lockdown was lifted, he was quick to respond and accused Reigns of snitching him to the Twitter police. 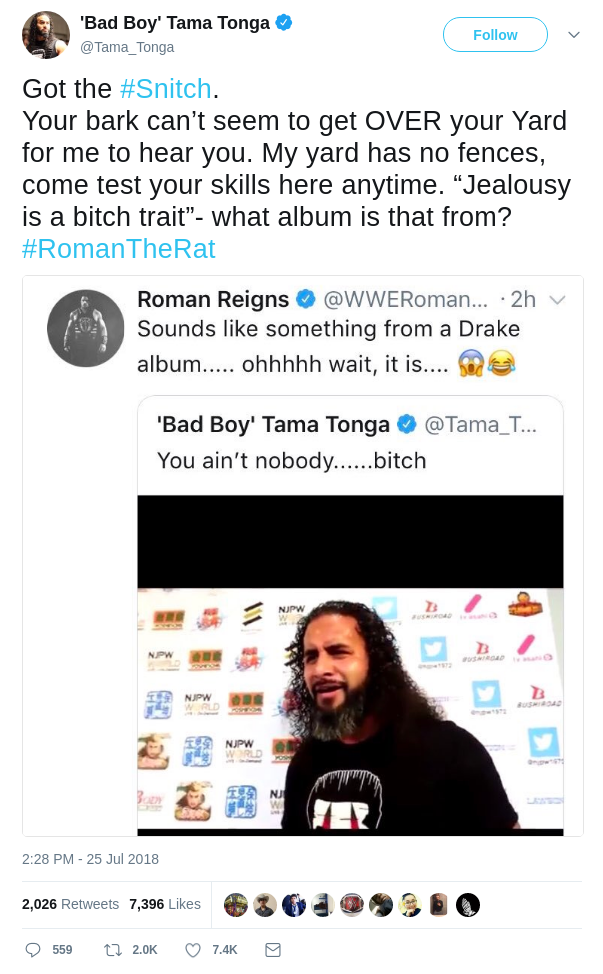 And then the banter escalated. So far, Tonga is leading 1-0 with his last jab at Reigns’ tendency to appear scripted on camera.

The feud has been quite entertaining to wrestling watchers. And weirdly, many are asking if this is an internal family war.

For some reason, social media users believe that Tama Tonga and Roman Reigns are related.

Perhaps it’s the resemblances in their physical appearances when Tonga doesn’t have face paint on. Or, maybe it’s because Reigns is related to someone with a similar name as Tama Tonga’s. 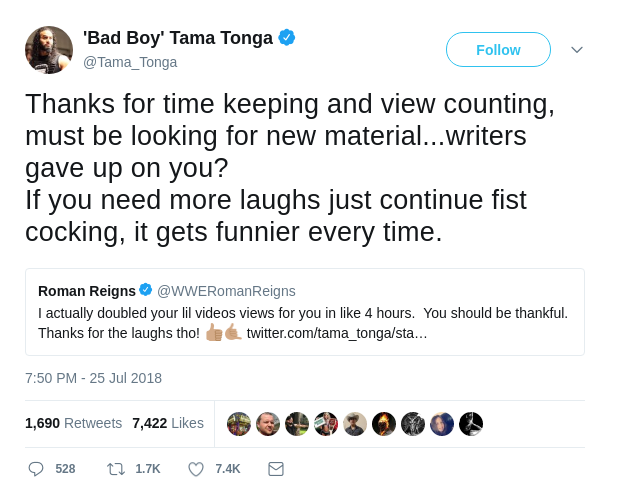 Roman Reigns was born Leati Joseph “Joe” Anoaʻi and is a member of the Anoaʻi family. This American-Samoa family is pretty distinguished in wrestling circles for blessing the sport with some of the greatest pros.

Dwayne “The Rock” Johnson comes from the Anoaʻi family. His dad, Rocky Johnson, was married to Ata Maivia, who is Peter Maivia’s adoptive daughter.

Peter Maivia wasn’t biologically an Anoaʻi, but the patriarch, Reverend Amituanaʻi Anoaʻi, considered Johnson’s grandfather a brother. Although they are both a part of the Anoaʻi family, Johnson and Reigns aren’t biologically related.

Also Read: Everything You Need to Know About Dwayne Johnson’s Partner, Lauren Hashian

Other well-known wrestlers from the Anoaʻi family include Rikishi, Umaga, Yokozuna, and The Usos.

The family also boasts a former wrestling champion, Sam Fatu, who went by several stage names. He was referred to as The Samoan Savage, The Tonga Kid, and Tama.

So, you can see where Reigns’ connection to someone named Tama Tonga comes from. But these two don’t have legitimate blood ties.

There’s no evidence that Tama Tonga and Roman Reigns are even distantly related. They come from two distinctive indigenous communities.

Tonga, born Alipate Aloisio Leone, is Tongan American and not Samoan. Tongan ancestry can be traced to the Kingdom of Tonga, and the U.S. considers them Pacific Islanders.

They are the fourth largest Pacific Islander American group while the Samoans are second in population.

Leone and his brother, Taula Fifita, were adopted from Tonga by his maternal aunt and her husband, pro-wrestler Tonga Fifita. Fifita wrestled under the names Haku or Meng and was close to the Anoaʻi Family, even forming a tag team with Rikishi.

Dwayne Johnson refers to Haku as an uncle. But that’s where the connection of the Tonga wrestlers and the Anoaʻi ends.

The brothers are active in New Japan Pro-Wrestling with the Bullet Club.

While it’s pretty obvious that Tama Tonga and Roman Reigns aren’t related, their beef has sparked some hilarious reactions. Those who believe they are related are hoping for one badass matchup between these supposed relatives. Secretly, so are we!

Also Read: Details on the Net Worth of Ric Flair in 2018