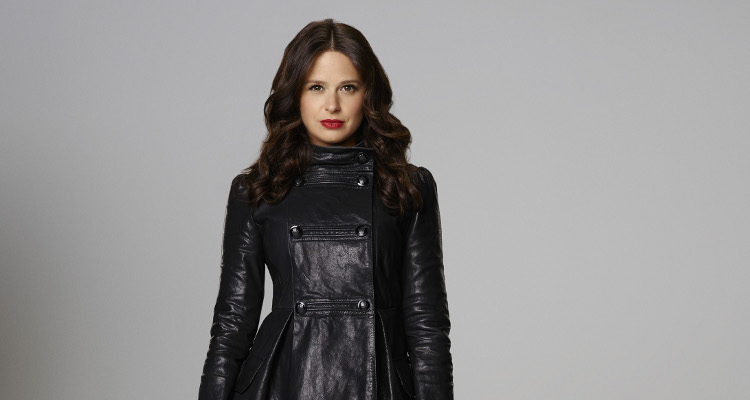 The Scandal season 7 premiere began from where we were last left off. Quinn Perkins has taken over Olivia Pope & Associates while dealing with a baby on the way.

Olivia Pope is back for the last time as Scandal season 7 premiered last night (October 5). As usual, Olivia goes about telling the new president and everyone in B613 what’s what like a boss. But we’re going to miss her gladiators in suits. Or are we?

Olivia’s gladiators are still here and under new leadership. Quinn Perkins & Associates is open for business. But the Scandal premiere didn’t seem to address Quinn’s pregnancy which made fans wonder if Quinn is pregnant on Scandal.

Here’s what happened in the Scandal premiere.

Back in May, Katie Lowes announced that she’s expecting her first child with husband, Adam Shapiro. The couple has been married since 2012 and Shapiro made an appearance on Scandal as Quinn’s boyfriend.

While Kerry Washington’s pregnancy earlier in the series wasn’t written into the show (which required Shonda Rhimes & Co. to figure out outrageous ways to cover up her baby bump), this isn’t the first pregnancy in Scandal. In a previous season, Olivia got pregnant with Fitz’s baby but had it aborted.

So when Lowes revealed she was pregnant, fans were curious to see how Quinn’s pregnancy would be included in the show. But in the season six finale, Quinn, who is engaged to Charlie, announced she is pregnant.

Lowes announced via Twitter that she gave birth to her Baby Gladiator, Albee Shapiro on October 2. And she tweeted this on the same day as the Scandal season 7 premiere. Now all we have to do is watch season 7 to see how Quinn’s pregnancy goes.

Some viewers were a little disappointed that Quinn Perkins & Associates barely got screentime. While Olivia was badass as usual, QPA looks a little in disarray under new leadership.

To start off, David is skeptical if Quinn can pull it off, considering she doesn’t have as much pull in Washington D.C. (then again, who has as much pull as Olivia Pope?). Enter QPA’s first client, and they get down to business.

While QPA thrives, Quinn drops by Olivia’s part of the town about her first client, a woman whose father has gone missing. During their conversation, Quinn interrupts it for a quick pee break. That, ladies and gentlemen, is the only reference to Quinn’s pregnancy.

Also, QPA’s missing guy turns out to be a CIA spy, and he was almost going to be killed to protect CIA assets until Olivia swoops in. The spy returns home, QPA’s first case is closed, and Olivia gave the most awesome speech to President Mellie. Here’s hoping that Quinn has her own badass moment by the end of Scandal.

It’s only the season premiere so we’ll have to see how Shonda Rhimes has included Lowes’ pregnancy into the story. In the meantime, congratulations to Katie Lowes and Adam Shapiro on their little bundle of joy!