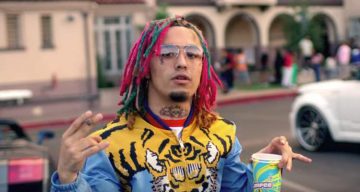 Rap visionary Lil Pump is dead! According to Reddit.com, one of the users on the website has claimed that the young rapper was found dead at his home with a bag full of Xanax. Is Lil Pump dead?

On November 12, 2017, Lil Pump tweeted, “People don’t like me oh well.” This led to a series of speculations about why the 17-year-old tweeted the message. It did not take long for people to start spreading the news that Lil Pump was dead because of an overdose. So, is Lil Pump dead? Keep reading to find out.

The news is absolutely fake, and Lil Pump is very much alive. If you head over to Lil Pump’s Instagram, you’ll see that he’s in Russia. He even posted a video of himself on stage during his sold-out concert in the country.

It might seem as though the millennial rapper died of an overdose as he seems to be no stranger to drugs. Lil Pump even made a post on social media that showed him on his bed buried in bags of what looked like “grass” or weed. Lil Pump has never shied away from posting videos of himself smoking “dope” or even claiming that he is on a “high.”

There even was a piece in The New York Times claiming that Lil Pump’s BFF Smokepurpp breezed into the green room before a concert and asked, “Who got Xanax and Percocet?”

But to clear the air, Billboard announced that Lil Pump and Lil Yachty would release a mixtape by next year. This was followed by a screen-shot of a conversation between Lil Yachty and Lil Pump regarding the same.

First Of The Year, We Promise ?? pic.twitter.com/Q1GtiuE5yu

How Is Lil Pump Now?

The rapper is definitely gaining more popularity from this news. But, there is no confirmation from any of Lil Pump’s associates or family about his death.

Two days ago, right about the time when people began to spread the news about Lil Pump’s death, he had reached Russia for his concert. The rapper looked highly motivated on stage and whatever doubts people had about his death, were drowned out by the concert crowd and his killer performance.

Lil Pump is on tour currently and die-hard fans are looking everywhere for tickets and passes to his concert.

Have a look at Lil Pump’s November tour schedule so that you can catch him at one of these locations!

Lil Pump will be on tour until December 23, 2017, with his last show in San Diego, California. The rapper is in Las Vegas on December 21, 2017, and boy will that be a great concert to attend!

You can head over to Lil Pump’s official website for more details about his tour. So, if you are close to any of the concert venues or live in the city where he’s going to perform, then you need to buy your tickets now!