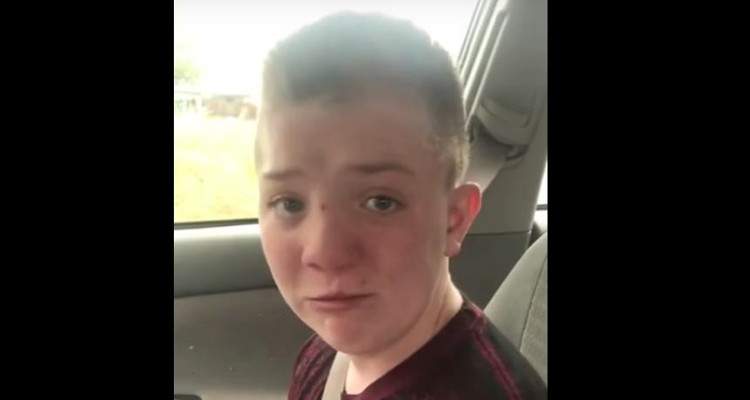 Keaton Jones of Tennessee was inundated with heartfelt support from the Internet and celebrities after his bullying video went viral. But the call for support from Keaton Jones’ mother has been questioned when she was accused of racism.

Here’s what you need to know about this bullied middle school boy whose video went viral.

Keaton Jones from Knoxville, Tennessee, has captured the Internet with his tearful video asking why he, or anyone, is the target of bullies. His mother, Kimberly Jones, filmed the heartbreaking video in the car after she picked him up from school. She uploaded the video on her Facebook page, which was viewed over 20 million times.

In the video, Jones described how he was picked on because of his nose and called ugly. The bullies also teased him for not having friends.

But what really got everyone is when Jones pleaded, “Just out of curiosity, why do they bully? What’s the point of it? Why do they find joy in taking innocent people and find a way to be mean to them? It’s not okay.”

“People that are different don’t need to be criticized about it,” added Jones. “It’s not their fault. If you are made fun of, just don’t let it bother you.”

Jones soon received an outpouring support for his positive message. His video gripped not just the Internet, but also celebs. They are among the many supporters telling Jones to stay strong and have offered him amazing opportunities to feel special.

Justin Bieber applauded him for showing concern for other victims and Chris Evans invited him and his mother to the upcoming Avengers Los Angeles premiere.

Even Donald Trump Jr. wanted to host the Jones family at his home if Jones takes up Dana White’s invitation to a UFC event.

Keaton-Don't waste time wondering why a bully would be so mean-They're sad people who think hurting others will make them feel better because they really don't like themselves-They're just jealous because you're so smart & handsome❤️Your friend-mh https://t.co/SUMw3OoCTm

On Saturday, Kimberly Jones posted another message on Facebook thanking everyone for the support.

“Friends, overwhelmed is the understatement of the world right now. I love each of you for what you are doing, but there is literally no way I can respond or even read all of the messages,” Jones wrote. “I’m not trying to be rude, or ungrateful, I’m just overwhelmed & at the end of the day, this isn’t new for us, & we still have to truck on thru the day to day.”

Stay strong, Keaton. Don’t let them make you turn cold. I promise it gets better. While those punks at your school are deciding what kind of people they want to be in this world, how would you and your mom like to come to the Avengers premiere in LA next year? https://t.co/s1QwCQ3toi

While Keaton Jones struck a chord with many, his story took an ugly turn when many dug deeper into his mother’s history. Old social media posts from his mother’s now-deleted Facebook page suggest offensive and racist behavior in the past.

Some of the disturbing posts include Kimberly Jones smiling while holding a Confederate flag, which has a controversial history related to the American Civil War. More pictures of the family with the flag were found on her Facebook page. And several Internet denizens have uncovered her posts soon after the Charlottesville incident where a man drove through anti-racism protesters.

Keaton Jones MOM is a next level racist who's posted in many offensive and non remorseful comments towards black people, so how is she preaching about bullying when she herself is a bully ??? lmao people are funny pic.twitter.com/bTnF7BFDGr

Jones, on her part, denied that she’s asking for donations.

As for the Confederacy flag photos, Jones said, “I’ve taken that down for a reason.”

However, she didn’t elaborate the reason.

Kimberly Jones has gone into social media silence since the allegations surfaced. However, Keaton Jones’ sister, Lakyn Jones, took to Twitter to address the racism allegations.

Lakyn Jones denied that anybody in her family was racist. Jones also claimed that the “KimberlyJones_38” Instagram account that was asking for donations from Schilling and others is not her mother’s account. She claimed they hadn’t asked nor received any money and don’t plan to.

Hollywood is apparently standing by Keaton Jones. Some celebrities have expressed their appall at his mom’s supposed racist behavior. However, they aren’t letting it cloud their perspective on the real issue here, which is bullying.

Keaton didn’t get to choose the family that raised & shaped him, you smug ghoul. How ‘bout showing him that people of all races & creeds can come together? Change things, maybe? Show him a better world? https://t.co/BZqBEboabL