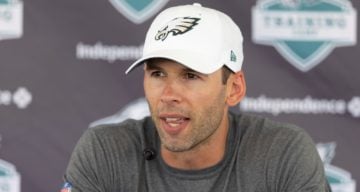 Jonathan Gannon at the NovaCare Complex on July 29, 2021 in Philadelphia, Pennsylvania. (Photo by Mitchell Leff/Getty Images)

As two football personalities share the same last name, fans can’t help but wonder if they are related. This is a query common for Jonathan Gannon and Rich Gannon. Jonathan is a lauded defensive coordinator in the NFL. Whenever he signs with a new team’s coaching staff, social media users often wonder if he’ll be on the turf of Rich, a retired NFL pro and now NFL broadcaster. Many simply ask if they are related, and others ask if Jonathan Gannon is Rich Gannon’s son or brother. They are, however, not related. Fans haven’t had the opportunity to see them share screen time in a broadcast studio, either.

While very little information is available about Jonathan Gannon and Rich Gannon’s families, there’s no evidence that these two have a familial connection. Football and their last name appear to be where the similarity ends.

Rich Gannon was born on December 20, 1965, in Pennsylvania. The University of Delaware quarterback was selected by the Minnesota Vikings in the 1987 NFL Draft and he went on to play for 18 seasons.

He retired from the sport in 2005, and shifted to broadcast. He was the NFL analyst on CBS until February 2021.

Jonathan Gannon was born on April 4, 1983, in Ohio. A career-ending injury at the University of Louisville derailed any chances of him playing football. Instead, he made a quick transition to coaching.

Jonathan came to the NFL in 2007, two years after Rich retired. He was on defensive quality control for the Vikings for four seasons.

Fans on social media occasionally comment that they want to see Rich and Jonathan Gannon in the same space.

However, they’re yet to get the opportunity to meme up the possible relation between Coach Gannon and retired pro Gannon.