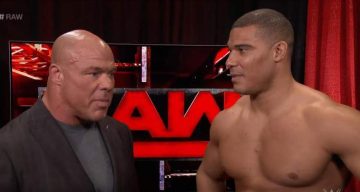 After Kurt Angle proclaimed to wrestling fans that Jason Jordan is his son, the tag team duo, American Alpha has disbanded and Jordan moved to Raw. On Sunday (November 12), Angle had a tough decision on his hands when Jordan suffered an injury. But before Jordan or Angle could make an announcement, Triple H returned to Raw and unequivocally announced that he will be replacing Jordan on the Survivor Series. This has revived serious doubts about Kurt Angle and Jason Jordan’s relationship. Here’s what you need to know about Jason Jordan and Kurt Angle.

When Triple H unceremoniously declared himself Jason Jordan’s replacement in the Survivor Series, WWE fans were wondering what message the promotion sent. WWE hasn’t done much beyond establishing Jordan’s pedigree with Angle. It raises questions about what Jordan’s “angle” could be.

A few months ago, Raw general manager, Kurt Angle left us marinating in suspense surrounding a major secret. Commentator Corey Graves informed Angle that he had some scandalous information that threatened to ruin his career.

On the July 17 episode of Raw, Angle came clean about his big secret. He revealed that he dated a woman in college and she got pregnant shortly before they broke up. The woman did not tell Angle about her pregnancy and had the baby without his knowledge.

He stated that his long lost son eventually made it to the WWE. It was revealed that Jason Jordan is Kurt Angle’s son. Following this revelation, Jordan’s tag team with Chad Gable, American Alpha disbanded and he moved to Raw.

But is any of this true? Only in the Raw universe. Jordan and Angle’s storyline is kayfabe —wrestling jargon for staged plots that make for captivating drama. Since the revelation, Angle and Jordan’s relationship has been central to Raw. Angle is often giving his “son” fatherly advice as part of maintaining this made-up reality for the audience.

By making Jordan the Raw GM’s son, WWE has certainly given his career a push and revived the series. The show has been suffering from a lack of creativity recently. The business is more transparent to the public now, and kayfabes are a risk. But it’s not uncommon for kayfabe kin of wrestling stars to crop up now and then.

These storylines may be farfetched, but they stick in the long-term. An example would be Vince McMahon’s storyline where Hornswoggle was revealed to be his illegitimate son.

But it’s not that difficult for the former Smackdown star. He mentioned that he sort of idolized Kurt Angle. And who wouldn’t want a WWE legend who represented the country and won to be their dad? It’s a dream come true for Jordan!

@fan4wrestling in life: my father. In the world of wrestling: Kurt Angle!

In real life, he wasn’t adopted. He was raised by his biological parents in Illinois, and has three older brothers, all of whom are incarcerated. His family was even in the audience during his Smackdown matches.

As for Angle, he has five kids and none them are Jordan. He has a daughter, Kyra, and a son, Kody from his first marriage to Karen Smedley. He has three more daughters; Giuliana, Sophia, and Nikoletta with his current wife, Giovanna Yannotti.

Jason Jordan has gained a significant presence on Raw the moment it came out that he was a former Olympic gold medalist’s son. Both his and Chad Gable’s solo ventures got a push by the breakup of their team. But if this storyline fails, WWE can’t repackage Jordan, and his career would suffer a setback.

Angle is often seen giving Jordan emotional pep-talks and man-hugs. It appears that he’s trying his best to promote him, too. There is the occasional speculation that Jordan is using Angle for his selfish ends. Then again, it’s a storyline to push Jordan as the new generation of Raw talent.

But with Triple H replacing Jordan on the Survivor Series, fans wonder what Kurt Angle is doing. They’re probably building the hype for a confrontation between Angle and Triple H. Because if there’s anything WWE loves more than emotional storylines, it’s using emotional storylines to enhance their epic matchups!

My son @JasonJordanJJ and I are doing a media day in Boston today for WWE Raw tonight. Going to be a great show. #itstrue pic.twitter.com/mfcxFaisVX