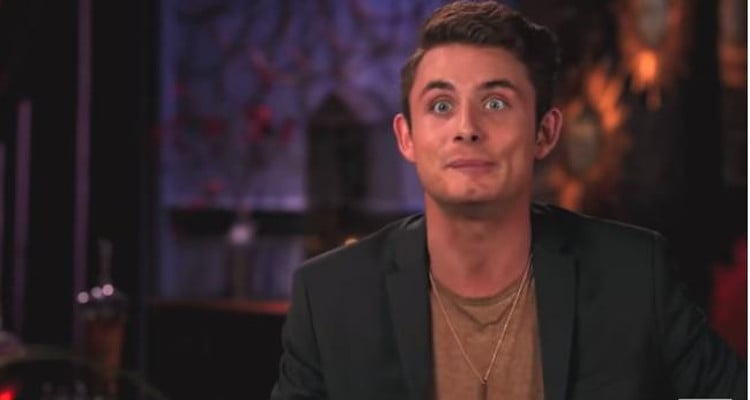 Vanderpump Rules is the Bravo TV spin-off of RHOBH, starring Lisa Vanderpump. But after the last episode of the reality show, James Kennedy is the one who’s grabbed the spotlight. It was Gay Pride on the show, and now everyone is wondering if James Kennedy is bisexual or gay.

While James Kennedy is dating model Raquel Leviss and proving his loyalty to her, many are wondering otherwise. The latest episode of the reality TV show suggested that Kennedy is comfortable with some man-to-man bonding, leading many to wonder; is James Kennedy gay?

Logan and James from Vanderpump Rules

James Kennedy is more than ecstatic about his relationship with Miss California USA contestant, Raquel Leviss. But then there’s Logan Noh.

??cheers everyone! Hope you’re all enjoying the the first episode of #pumprules as much as I am! What was your favorite part?

On the previous episode of the show, James gets caught between Raquel and Logan. Not literally, but he’s expected to explain his behavior with Logan.

It so happens that when the trio hangs out at a restaurant, Logan and James coo with each other. And they state the occasional “I love you more than a friend,” which gets Raquel’s death-stare going.

James appreciates Logan for being his best friend and adds, “Do I think you’re in love with me? Absolutely.”

Cut to Raquel who’s so puzzled. She looks like she’s trying to solve the mystery of the black hole.

Logan then realizes he needs to explain to Raquel what was going on between the two supposed best friends and said, “Me and James just have a very deep relationship, so for me it’s like, I just always look out for him, you know?”

Raquel is not convinced with the explanation and is doubtful. Just before James gives her a peck on her lips, she says, “Yeah, but there’s something going on.”

So, we headed over to James Kennedy’s Instagram page to snoop around, and it looks like he’s pretty straightforward about his priorities towards Raquel. He seems as though he loves her a lot and is proud of her achievements, too. And, he’s not afraid to show her off!

New year getaway was a complete success I love you baby @raquelleviss ?

James even promotes his girlfriend on his Instagram page. This can convince even the most skeptical snooper that he loves Raquel.

But get this, in the preview for the next episode, Jax is heard telling James that Logan has been going around town spreading some “news.” Jax said that Logan is telling people that he (Logan) and James are “hooking up.”

Only time will tell if James Kennedy is bisexual or straight. But as of now, we can only say Raquel Leviss is one lucky girl to have a loving boyfriend in James.